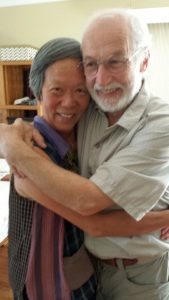 Many of you will know Duang from her catering business, from her involvement in the Home Harvest FEASTivals, or from her workshops on waste-free cooking. Judy Vizzari has now interviewed Duang, and her husband Rob about all these matters, as well as about their experiences as home growers. Here is how Judy introduces her write up: “Duang Tengtrirat and her husband, Rob Reid Smith, live in the back blocks of Research. I’m visiting them to find out about their long list of accomplishments which, I’ve heard, include innovative gardening techniques, abundant food production, waste-free cooking and largescale catering. I also want to hear about their contributions to the learning and health of our community. Their fame has preceded them but I am keen to learn more.” Read the full interview.

One thing that I would like to highlight from the interview is that Duang won the ABC PocketDoc Short Story Competition in 2015. Her story, My Silent Day, was about blueberry picking and racism. Listen to the story. As part of the launch of 2016 competition, Duang recorded a follow up story. The setting is one year later and Duang is again collecting blueberries. But this time her meeting is much more pleasant and heart warming. Listen to Duang’s follow up story.

Mac’s tip of the week 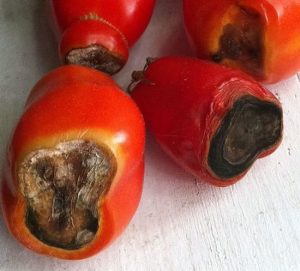 Blossom-end rot looks like a discoloured/black, watery, sunken spot at the blossom end of the fruit. The spot will start out small but grow larger and darker as the fruit continues to grow.

Often a problem with tomatoes, capsicum, cucumber, eggplant and zucchini, blossom-end rot is an environmental problem (not fungal) most often caused by either extremes in soil moisture levels (either too dry or too wet) or by calcium deficiency. Even if you have spread lime etc, uneven watering can interfere with the uptake of calcium. Too much nitrogen fertiliser and rapid growth can also make things worse. Mulch helps, but 40 degree days don’t.

The good news is that blossom-end rot will not spread from plant to plant, and will not necessarily affect future fruit. As a stop gap measure, try spraying plants with a calcium or kelp solution but recognise that consistent water supply is the key.

Some varieties are more resistant than others. For example, I know of one gardener that has a mixed planting of Roma and San Marzano tomatoes. All the San Marzano have blossom-end rot, while the Roma show no sign of it. For tomatoes at least, larger fruit are more susceptible than smaller.

Read all of Mac’s tips.

Guy’s tip of the week

It looked like Mac’s tip wouldn’t arrive in time so I wrote a tip of my own.

My tip is: consider planting sugar snap peas in the summer. Our veggie patch is strictly based on a crop rotation system which means that we always have two spots available for legumes. In winter, we make the obvious choice of broad beans and peas. In summer, beans are always planted but that leaves a second spot up for grabs. Peanuts are one possibility and soybeans are another but we had difficulty sourcing either this year so we decided to consult our local nursery. They said that their experience was that sugar snap peas (but not standard garden peas) could be grown all year round. So, we planted some seedlings in December and this week, less than two months later, we have just harvested a bountiful crop.

Maria’s tip of the week

I thought that this recent post by Maria of My Green Garden was interesting.

Sugar is used in jam for 2 reasons (or maybe 3, if you include taste).

First, sugar acts as the preserving agent for the fruit. It acts to prevent bacteria and other food spoilants from taking hold. The ratio needed for this is at least 75% of the weight of the fruit has to be added as sugar.

Second, the sugar acts to help ‘gel’ the fruit. This happens with the combination of the fruit with its natural pectin, the sugar and acid (from the fruit or added as lemon juice).

So, without enough sugar, the jam might go mouldy and won’t gel, staying very runny.

This is true to an extent but it can be overcome.

To overcome the preserving issue, after making the jam I make sure that I heat-preserve the filled jars. This makes a great vacuum seal on the jars, which means there is no air in the jar. No air = no bacteria.

To make up for lack of a firm set, I cook it a little longer than I normally would with a full sugar jam; and then accept that it will be easier to spread on my breakfast toast than a commercial jam, whose sugar content may be even higher than the 1:1 ratio. So it might be called ‘spreadable fruit’ rather than a true jam.

I have also tried adding a minute amount of Xantham gum powder (available in the health food section of my local supermarket) right at the end of the cooking process, This does firm up the jam, so that it is still spreadable. But don’t overdo it as you might end up with rock hard jam.

What seeds to plant in February

Here is a list (see the planting guide for more detail):

Compared with January, the most important additions are some of the brassicas: broccoli, Brussels sprouts and cauliflower.

The winner of last week’s random draw for the free annual subscription of the PIP magazine was Joe Selvaretnam.

Thanks to those of you who sent in various ‘oink oink’ comments(!). However, the reference in last week’s newsletter was to ‘pip pip onk onk!’, not ‘pip pip oink oink!’, and is baby talk rather than anything to do with pigs.

55 people entered the draw, up from 45 in the previous week. Given the continuing level of interest, another year’s free subscription will be offered this week (and then we’ll probably stop). It will work as before: if you have previously entered, you are automatically entered for this week; if you haven’t previously entered and want to enter this week, simply email me some time today (Wednesday) with the word ‘PIP’ or equivalent. Note that anyone who includes the word ‘oink’ in their email will be automatically excluded!

Backyard Honey, from Surrey Hills, have written in to say that budding beekeepers may like to know that they sell healthy re-queened, foulbrood-test honey bee colonies. You can ring Peter (0425 873555) to chat about honey bee colony purchases and other apiary services, including on-site advice, winter bee-hive pack-down, honey extraction and education services.

Permablitz ‘hero of the month’

Every month, newsletter reader Adrian O’Hagen, discusses a ‘hero of the month’ on the Permablitz website. Most are growing guides for particular fruit or veggies, some common and others less common. This month’s hero is midyim berries. There is now a page on our website with links to each of these guides (currently 9 fruit, 18 veggies and 2 weeds).

Proverb of the month

As cool as a cucumber. Meaning: calm and unruffled. First recorded in 1732 in a poem by John Gay. In this simile, cool means imperturbable rather than having a low temperature. However, the simile comes about because, in hot weather, the insides of a cucumber apparently remain cooler than the air because of their high water content and thus cucumbers are cool to the touch.

Question: what is cool and hot at the same time? Answer: Barack Obama (or, indeed, Michelle Obama).

Read all the proverbs.

Gardening quote of the month

The best place to find God is in a garden. You can dig for him there. By George Bernard Shaw.

Read all the quotes.

Joke of the week

How do chickens bake a cake? From scratch!

Read all the jokes.