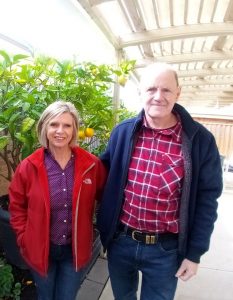 If you were to drive past Chris and Dianne’s suburban block in Macleod you could be excused for not noticing anything unusual. Theirs is a neat, relatively new, two-storey brick home with a garden seemingly laid bare by winter. It fits well into the landscape, but it’s not ‘different’. You’d be wrong, though, to assume that not much happens in its garden.

Chris and Dianne have lived in Macleod for nine years. They moved here from Blackburn to be close to their daughter, but she’s now returned to Blackburn while they’ve opted to stay in a place which is for them is too good to abandon.

Chris is a tall man with the look of someone constantly on the move. He greets me at their front door and ushers me into the house where Dianne, a softly spoken, smiling woman, joins us. We decide to immediately brave icy weather to explore their garden so venture out into their small backyard which consists of a sunny patio (covered with clear roofing) and a narrow strip-garden. 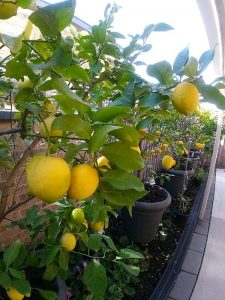 This space immediately reminds me of the amazing garden at Villa d’Este in Tivoli, just outside Rome in Italy which has rows of hundreds of potted citrus trees. Here also is a line of large pots containing beautiful, mature oranges, lemons, mandarins, lime trees (including an Australian native lime). Several, I’m told, have been double grafted to increase harvested varieties.

Seven pots stand on the two-metre wide strip garden backing onto a neighbour’s brick garage wall. We’re on the north side of the house and so, whilst the area is low on space, it’s protected and sunny. The pots are filled with a mixture of eco-mulch, ‘zoogro’ and potting mix and seem to be working well – the trees are heavy with frut. These trees are lovely.

One pot, at the end of the line, is different – it contains an interesting variety of apple tree – a ballerina, which grows an upright trunk from which very short, straight branches bristle out horizontally. Chris and Dianne have been told that its apples “almost grow straight out of the trunk” and, although it hasn’t yet cropped, they’re waiting expectantly for the first fruit. 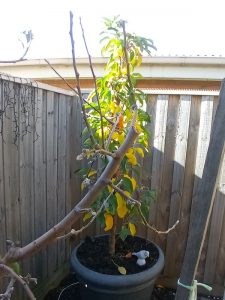 Next to this tree is a miniature dual grafted peach and nectarine tree with unusually long leaves and, I’m told, delicious and full-sized fruit.

On the ground between the pots is a host of cyclamen. They’re blooming red, pale and lipstick pink and emerge in a carpet from under their dark green circular leaves. Chris tells me that at first they tried blueberries in this area but because of the heavy clay soil and closed position they were unsuccessful. Then a spent cyclamen tuber was discarded between the pots and happily found its home amongst the mulched and well-watered soil – “it exploded!” he says, so successfully that others were planted and together they have multiplied enthusiastically to create a cyclamen carpet. This is the serendipity of gardening.

Behind and above the trees are solar lights which illuminate them at night and there’s a backing row of mirrors fixed to the brick wall to reflect daylight – two clever ways of providing a sense of depth and space.

We move on past a water tank, one of two which hold enough rain from the roof water runoff to service the toilets in the house and the garden for most of the year. Chris tells me that he has installed a computerised OpenSprinkler system which ensures that all the garden is watered via a sensor so that individual plants receive just the right amount of moisture throughout the year whether the family is at home or away.

At the end of the house is a hanging garden which contains 50 (five rows of ten) shallow pots connected to a sprinkler system. This area is experimental, Chris explains, as he is still considering soil and plant types to optimise efficiency, but he has already found that strawberries and lettuces seem to thrive. I notice that the pots contain many spent marigold flowers which hold a bounty of seeds ready for sowing in spring. This experiment reflects Chris’s innovative approach to gardening in limited space. 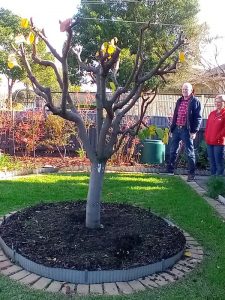 Along the side of the house are two beds which have been connected to produce one rather generously high wicking bed. It’s growing a healthy mix of radishes and brassicas despite this being the ‘off’ season. Although it’s now mid-year and the garden is resting, I see a generous supply of radishes and greens to complement winter’s table.

I’m impressed by two tiny butterflies in this bed which Chris has made to deter brassica moths – they’re very pretty and look authentic but, unfortunately, it seems they’re more likely to attract grandchildren rather than to deter moths – their wings are often removed by tiny fingers!

Further on we find another raised garden bed which was, I’m told, the result of Chris and Dianne’s first exploration into vegetable gardening. It’s a long container filled with soil and is fallow now, but promises a good crop in warmer months.

There are compost bins both here and dotted throughout the garden, those of the small variety with screw lids and there are worm towers in the raised beds.

We pass between sentinel olive trees standing either side of an archway at the side of the house and I’m told they produce beautiful meaty olives including a Sevillano variety which, in its first year, produced seven olives “the size of golf balls“!

We continue on to the front garden. This is the space which seemed bare to me on arrival but now, with my gardening eyes on and Chris and Dianne talking me through their projects, I see that there is quite a bit happening.

There’s a row of blueberries which runs along the side fence. Chris tells me that they’re heavy croppers – they produced 10 kilos last season in staggered fruitings. The fruit had to be well-netted though, to keep out predators (not only birds!) so a complete netted cover protects the plants throughout their fruiting season. Those plants are now ready for pruning. 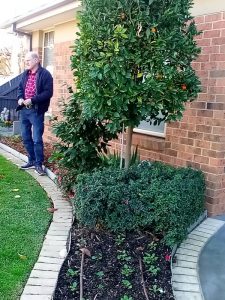 There’s a strawberry patch with a few strawberries still hiding under leaves – enough to delight any grandchild on a strawberry hunt – and flourishing rhubarb plants, bound to augment many of Dianne’s pies and preserves. The ornamental garden hasn’t been forgotten, either: a topiaried cumquat tree greets visitors, a gardenia separates rhubarb from strawberries, and a freshly planted flower bed of pansies is set to attract pollen seekers in the spring.

But it’s the trees in this area which really impress, with a quince tree centre stage. Right now it’s heavily pruned but I’m told that last season it produced 20 kilos of fruit and that, in turn, was well used in jellies and pastes. Add to that a stella cherry tree (predictably known as ‘Stella’) which, without the need of a partner, produced a 3.5 kilo crop last year in its second productive season. Coddling moths and cherry/pear slugs do affect these trees but Chris has plans to employ a homemade moth trap for the coddlers and to treat the slugs with an organic spray to slow their progress.

A labour of love

Of course, such production requires good soil and it seems that Chris and Dianne have devoted many hours to tending theirs, to removing weeds and adding compost and manures to increase its productivity. Their chemical- and poison-free process of replenishment is ongoing. They came to Macleod with little knowledge of organic gardening but now soil conditions and water retention have become important considerations in their household.

Having completed the circuit, we return to the warm and friendly kitchen dining area which looks out through a glass wall onto the citrus trees. Dianne produces generous portions of a lovely light banana, apple and walnut cake and we sit to enjoy morning tea while I hear about their involvement in a local gardening venture. 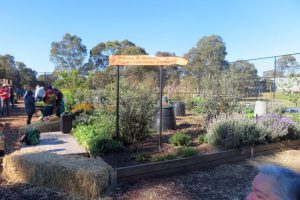 Chris is Treasurer of the Macleod Organic Community Garden’s organising committee. This communal enterprise was created to utilise available land at Macleod College and it is with pride and tremendous enthusiasm that Chris talks about it.

In September last year, after three years of construction, the garden was officially opened by Costa (of Gardening Australia fame). It seems that it’s much more than ‘just a garden’ as its involves many initiatives including seed collection and sharing, tending a space equal to two tennis courts containing open vegetable beds, wicking beds, and 2 poly tunnels to extend autumn and winter production. There are fruiting orchards too and other initiatives include tool-sharing equipment, assistance with soil testing, workshops, school education programs, advice for home gardeners and spaces for communal socialising. The garden’s users are locals and of blended cultural backgrounds – they add diversity to the plantings, range from school age to the elderly and apply their varied skills to contribute to the many tasks at the garden. Produce is divided between members, Macleod College and local organisations that support disadvantaged people in our community. 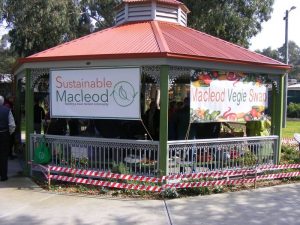 The garden is a offshoot of Sustainable Macleod which also runs the local Macleod Veggie Swap. The veggie swap regularly enables locals to offer their excess produce and, in return, to boost their larders with others’ donated produce. At their last swap, 18 kilos of fruit and vegetables, 7 herb bunches, 100 packets of seeds, 1 jar of preserves, 20 plants, bottles, seedling pots, egg cartons, and olives were all shared. Dianne and Chris often contribute to the swap and I’m sure that Dianne’s preserves, jams, marmalades and cakes are popular items.

I’m impressed by Chris and Dianne’s energy and commitment to organic food production and their community, and leave them with a broadened view of gardening styles and the many economical, physical and communal benefits which are derived from communal and home garden cultivation.