Ann Stanley visits the garden of Erin Goedhart, from Vermont. 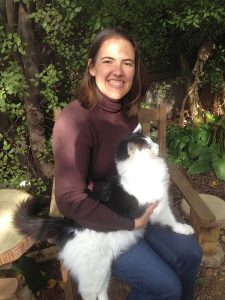 Erin and Lenny Goedhart live in a typical suburban street in Vermont where some of the older buildings are being replaced with two-storey townhouses. Theirs is one of the original houses, pleasant and homely from the front but giving no clue to the amount of food being produced at the back. The couple started a veggie garden 10 years ago when they first moved into the house but with work, a household to run and two children to home school, they let it go. There’s a lot of ‘letting it go’ in any gardening journey, I think. There certainly has been in mine, for all sorts of reasons.

So Erin’s current garden is seven years old. The land, including the house, measures about 1,000 square metres and on it grows a lot of food: grapefruits, limes, lemons, plums, peaches, figs, olives, apples and chestnuts as well as numerous berries and a large range of vegetables. There are also several varieties of bee-attracting flowers and a beehive which belongs to Adrian O’Hagan, aka The Bearded Bee. While all of the trees produce fruit, Erin says, “nothing fruits quite like the feijoa“, which produced about 60Kg this season. This year Erin has been able to swap her feijoas with her appreciative neighbour for lemons as Erin’s lemon tree is currently ‘unhappy’ after a hard prune. Erin has found with fruit trees some years are better than others. While her two peach trees are prolific, her plum trees seem to fruit only every 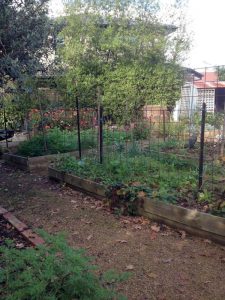 two or three years. This kind of knowledge only comes after years of observation, which is why making a productive garden is a slow process that requires patience, persistence and willingness to accept ‘reality according to nature’.

As far as weed control is concerned, Erin compromises slightly her commitment to organic food. Using what she calls “that Monsanto evil stuff“, Roundup, she carefully paints weeds that have been chopped a bit. The beauty of the painting method (she actually uses a paint brush!) is that there is no spray to land on the food plants so the effect of the chemical is minimised. This idea came from Olwyn, aka The Backyard Vegetable, the gardening mentor who started Erin on her gardening journey seven years ago. “Everyone needs an Olwyn“, she laughs.

All gardeners have problems to solve and the biggest problem presented by Erin’s garden is water – not because there is too little, but because there is potentially too much. The house and a couple of neighbouring houses are built on a swampy site and, as more and more of the blocks in the court have been subdivided, trees have been removed and replaced by buildings, causing water to drain into the swampy land. The solution? Trees. Erin has planted pittosporums, partly as a

screen and partly to suck up the moisture, as well as thirsty citrus trees. So far there has been no flooding and the upside of the situation is they have never had to water the lawn. The Goedharts have turned their biggest problem into an asset. I am reminded of the wisdom in David Holmgren’s 12 principles of permaculture, the first one of which is ‘catch and store energy’. By planting pittosporum and citrus trees, Erin has captured water (a crucial energy source) and stored it in the soil for trees that need it.

Erin says that her philosophy about growing food is evolving. Her belief about sustainability is at the heart of it as well as a commitment to providing wholesome organic food to her daughters, one of whom has two auto-immunity conditions. Erin explains that this has been managed through diet, adding that “organic food is expensive“.

Gardening was also an important part of her daughters’ home-based education. “I felt a very strong urgency to teach my children how to grow their own food“, she says. Through gardening, Erin’s daughters learned to identify plants and to kill weeds using boiling water. They also learned how to use 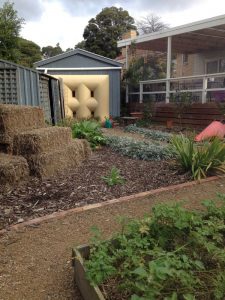 Erin’s interest in clean organic food spreads wider than her own garden. She and her family belong to the Eastern Region Food Co-operative (ERFCO). Every two months Erin places a bulk order for fruit, nuts, oats, seeds and other foods, all of which are sold by one supplier at wholesale bulk prices. She also buys her pea straw bales through the co-op. ERFCO began in the 1970s with a grant from the Whitlam government and it’s encouraging to see it still going strong!

The only pest control in the garden is pet-friendly snail pellets and the use of cabbage leaves placed at the corners of the veggie beds as cabbage leaf moth decoys. This was another one of Olwyn’s ideas. “Anything clever has come from Olwyn!” says Erin. “She is really good at finding solutions.”

The garden has also benefited from the clever work of Kushala Prem and his team from Sacred Garden Landscape Design and Construction. As Erin has impaired vision, she would sometimes get lost, so Olwyn recommended paths (See Olwyn’s website page about designing Erin’s garden). Kushala designed these with gravel and pleasing curves, one of which leads to Erin’s meditation space, a beautiful secluded area with seating and a pond. Kushala who, as well as building landscapes also teaches permaculture, has recently been commissioned to build some wicking beds to replace the original ten-year-old garden beds.

When I asked Erin about the pleasures of gardening, she said one was cooking with fresh produce, particularly making soup when potatoes and leeks are in season together. She also loves sudden surprising glimpses of colourful flowers. Above all, Erin loves sharing. “It’s so much fun“, she adds. “While there’s abundance you share it!”