Helen Simpson, from the Mushroom Shed, visits the garden of Julie French, from Montmorency. Julie was one of the original founders of Montmorency Food Swap. 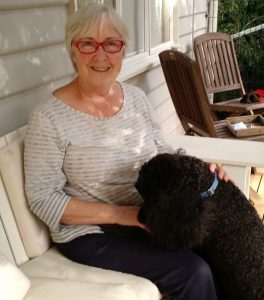 Most people grow their fruit trees and veggies in their backyard but Julie, and her husband David, have gone against this traditional approach. Instead they have created a bountiful front garden full of produce, much to the delight of passers’ by who often admire their progress and stop for a chat.

Julie tells me that she grew up eating lots of seasonal fresh food, with both her grandfather and mother growing fruit and veggies at home. With an interest in both food and cooking, especially with fresh, seasonal produce, Julie decided to start her own vegetable garden around 10 years ago.

Being mindful of climate change, and with predictions of local food becoming more expensive and harder to obtain as smaller producers sell out to bigger farmers driven by export markets, homegrown food also makes sense to Julie. It provides her and David easy and inexpensive access to good quality produce, plus an ability to share and swap produce and resources locally within their community. Growing food also provides Julie with relaxation, exercise and the enjoyment of getting her hands dirty to produce a rewarding outcome. 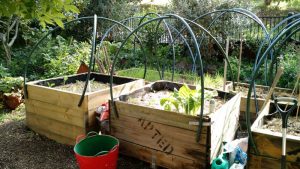 Julie started home growing in the backyard and, together with David, set up veggie beds and a water tank. Early on, however, this became problematic, as the beds were mostly shaded and the surrounding gum trees, whilst beautiful to have, sucked water away from their fruit trees and veggies. So, whilst some plants still remain in the backyard (lemon, quince, plum and apricot trees), Julie moved her growing efforts to the north-facing front garden, being much sunnier. Today they have 18,000 litres of water in tanks for their veggies and fruit trees and also use raised, strong timber box wicking beds in the frontyard. These are extremely successful and enable them to holiday without being too concerned about the watering. 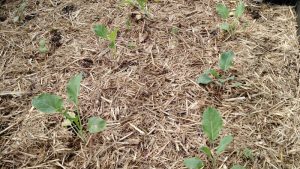 Julie did a permaculture course, which taught a common sense approach to working with what is at hand to solve existing land challenges. As a result, they channel water on their property to cope with extreme weather events, plus pay a lot of attention to building up their soil via compost, chook, horse and green manure. Their weeds are composted and wheely bins of autumn leaves are collected from neighbours for mulch. Soil and mulch are key to their productive garden. 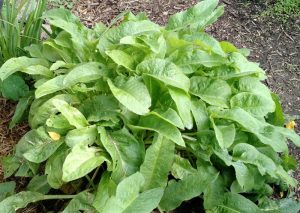 In addition, Julie practises crop rotation, for example, a big leafy crop will be followed by a root crop to change what a plant takes from the soil and how it grows in the soil. Comfrey is an important plant in their garden as it can be used to accelerate compost, be fed to the chooks and, from its deep root system, also tells Julie when it’s time to water via wilted leaves.

Apart from the extensive amount of fruit trees growing in the front garden (a feijoa, fig, olive, mulberry, Gravenstein Apple, orange), plus an extensive array of veggies appropriate to the season, there are many colourful flowering plants to attract bees, hoverflies and ladybirds. These are mainly planted along the front fence, where they are often admired by people walking past, but are also interspersed amongst the other front garden plants. They flower, not just in 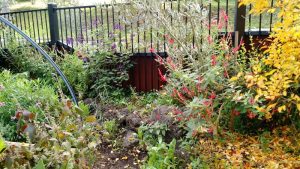 Spring, but throughout Summer and Autumn.

Being a keen cook, Julie makes jams, chutneys and jellies with her produce using her Fowlers Vacola preserving unit. She also owns a dehydrator, which dries the abundant figs. Enough olives are preserved to last her and David for the year.

In the past, Julie has run cooking classes, focussing on seasonal, fresh produce with a vegetarian influence, with interest increasing in the 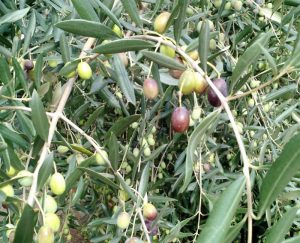 community to learn how to cook with more of a vegetable base. Julie enjoys the challenge of turning a mixture of vegetables into a tasty dish and regularly buys one of the great value ‘$30 mixed bag of veggies’ from Penny Crawford’s stall at the Eltham Farmers market to make into meals for the week. She also used to cook at the Little Organic Shop in Hurstbridge, about which she speaks of the fun and challenge of devising meals, jams, pesto and pickles out of any excess produce – rather than wasting good food.

Julie’s plants don’t suffer a lot of insect problems, as she encourages a lot of good bugs into her garden, plants brassicas when it’s too cold for the white butterfly caterpillar to be a major issue and also picks off any she finds. With raised beds, snails are less of a problem, although possum and rat damage is difficult to eliminate.

Julie is an active attendee at the Montmorency Food Swap and praises these sorts of local community groups for the extensive knowledge and education they provide to others starting out with their gardens. For her, some of the most important aspects of making a successful garden have been soil improvement and planning the garden in terms of how to place plants – looking at their mature size, the aspect, what the plants need and how everything fits together – and above all, lots of persistence. 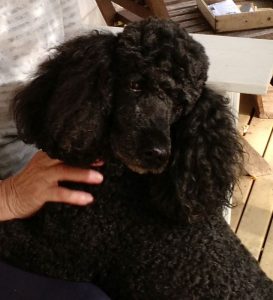