Judy Vizzari visits the garden of Katrina Forstner, from Preston. As discussed in the article, Katrina is an advocate for native bees (under the banner of Buzz and Dig) and is active in both ShareWaste and the Transition Darebin food swaps. 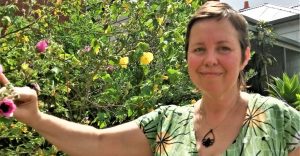 I’m on my way to visit Katrina Forstner, of Buzz and Dig fame. She’s a lady who, I’ve heard, knows a lot about native bees and I’m interested to hear what she has to say, especially since my own bee hotel sadly waits, currently unused.

I find her house is redbrick Edwardian. It sits sideways (on a narrow block) and its lovely bay windows overlook a decorative southern-facing front garden. There’s a curving path which leads to the front door on the eastern side and I feel a thrill of anticipation as I follow it to the entrance. I knock and Katrina immediately opens the door to greet me warmly. She’s a 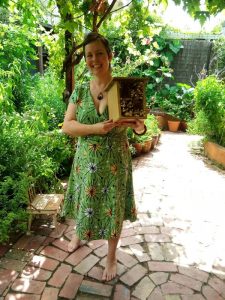 It quickly becomes apparent that Katrina has more to talk about than native bees. Her garden and her life seem to be a blend of practices which complement each other and extend outwards into her community. They include ‘ShareWaste sharing’, composting, worm farming, chicken husbandry and, of course, encouraging native bee populations. Each of these benefits her productive food garden, her family and her community. It’s a cycle and, to demonstrate how it works, she suggests that we start ‘at the beginning’, that is, at the front gate. So ,once again I’m standing amongst the pretty cottage blend of abundant, rambling indigenous and non-indigenous plants and gazing at the front of the house.

When I entered the property I was so taken with that area (and with searching for the front door) that I noticed little else. Now, Katrina points out a bare lawn patch to the left of the path and, curiously, a large black plastic compost bin. They appear to be rather incongruous … and so we start our journey. 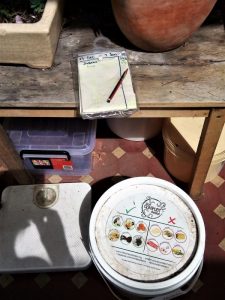 ShareWaste is a website which “connects people who wish to recycle their kitchen scraps with their neighbours who are already composting, worm-farming or keep chickens.“.

Imagine a young mum one-handedly propelling her wide-eyed baby (who sits princely ensconced in his pusher) down a quiet suburban street whilst she chats with a second toddler and balances a two kilo bucket of kitchen waste in her pusher’s carry basket. She arrives at Katrina’s gate and wends her way up to the front door to weigh her composting material, deposits its contents into carefully marked receptacles then records her contribution into a register, collects an empty bucket for the next delivery and then quietly leaves … or, perhaps, encounters Katrina busy in her garden where they stop to share the moment and perhaps some garden bounty.

Tough parenting job? No, this is outdoor family time and utilisation of resources. It offers a valuable learning opportunity for the children as well as a way for the adults to contribute to the welfare of both their 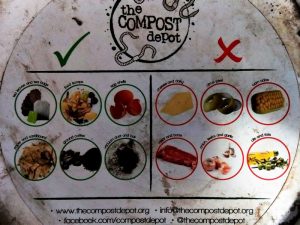 families and their community. And it’s a story multiplied by a cross section of visitors – young, elderly, house and apartment dwellers, renters and office workers – neighbours and others from further afield. It’s an initiative to benefit all participants.

And what ‘waste’ goes into the bins? All manner of kitchen scraps, garden clippings (cut small) and animal manure. What happens to it? It’s added to Katrina’s compost collection to produce richly composted soil which augments her garden and is also shared with the 30 or so contributors who are all registered members of the local Share Waste Scheme.

Katrina is the force behind the Darebin cohort and the scheme has become so successful that she is now supported by Darebin Council, hence the large black plastic twist top compost bin in her front yard. 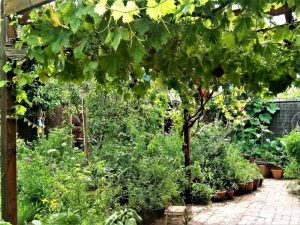 Katrina and her husband, Matthias, have lived with their two small children in their home for five years and during that short time have converted their back yard from a grassy suburban block into a productive food producing forest. As with many of the permaculture gardens I’ve visited recently, plants are blended to encourage pollination, confuse predators and to support each other – this appears to be a successful example of that gardening method.

We stand under a shady pergola which is heavy with pendulous green grape leaves and survey the small but lush blend of fruit trees, flowers, herbs and vegetables. It’s lovely and cool, even though the morning is now warming. It’s the kind of garden that invites discoveries. 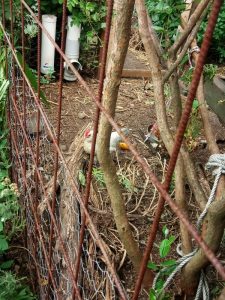 Katrina tells me that some of the fruit trees (e.g. the nashi, pear and feijoa trees) existed when they arrived and that two dwarf peaches, a mulberry, plum and citruses have been added with size in mind and pruned to discourage height. There are tomatoes and beans here but they populate rather than dominate the garden. Cottage flowering plants, including nasturtiums and sweet peas and a full range of kitchen herbs, sprout robustly from every nook and cranny.

In one corner is a chicken coup and run, the home of two Belgium D’Uccle chickens. Katrina tells me that they are “lovely birds, good producers and sweet natured“. It seems that they’re easy to handle and great workers – they thrive on plant cuttings and kitchen scraps and produce valuable manure for the compost. They are certainly decorative, one a pretty brown, white and black spotted and the other a dusky ‘lavender’ colour.

I’ve always wondered why some chickens have feathers on their ankles, well, now I know – it seems that they sweep the earth after scavenging. How efficient! 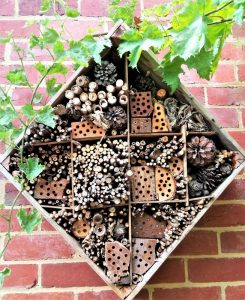 Time is passing, the sun is high and we haven’t yet touched on the bee story. It’s time to sit under the pergola with a cool glass of water and talk about our country’s amazing native bee population.

Did you know that there are 1,650 species of Australian native bees (including the better known blue banded bees, leafcutter bees and teddy bear bees), that most don’t produce honey (because they are solitary – don’t need to support a queen or workers), that they collect pollen and use it to feed their young, and that they build nests for their eggs in narrow hollow twigs or even in hard, clay soil like that which I have in Eltham. Many native bees are tiny and can be easily mistaken for other insects, but they are built for specialised pollinating and are great to have in your garden.

I’m interested to know how to attract native bees into my garden (and my hotel). Katrina talks about the many plants which attract them, amongst them Angophora, Borogo officinalis, Buddleja davidii, Dianella amoena, Eucalyptus, Hardenbergia violacea, Lavandula, Leptospermum, Melaleuca, Salvia, Scaevola and 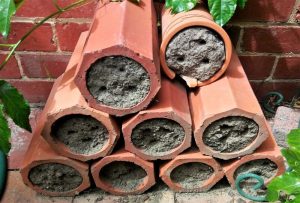 Westringia. It seems these tiny pollinators have colour preferences, too, starting with purples and blues then working down through yellows and whites to pinks. There’s so much to know about the habits of these tiny insects and Katrina is obviously an expert.

“So why don’t they visit my carefully constructed hotel?” Well, I learn there could be many reasons but sure ways of encouraging visitors seem to be to keep the canes small (spent parsley stems or raspberry canes are good), to make sure the canes have a backing, to place them in a sunny position at about eye height, and to angle them slightly downwards (so water runs out of them). And, it seems, they like generous verandahs.

How to find out more

I’ve just skimmed the surface of Katrina’s knowledge and there is so much more that she could tell you. If you want to hear more, she regularly runs workshops for novice native ‘beekeepers’ in her garden and at other venues – keep an eye out for details of upcoming events on the Buzz and Dig events page. She also attends markets, fairs and conferences and is happy to attend private functions – almost anywhere where there’s an interest.

It’s almost midday and time for me to go. I’ve seen and heard so much and my head is full with information, so I thank Katrina for her hospitality then find my way home through busier streets and brighter sunshine than that in which I arrived.

Back home now and out in my garden, busily inspecting my carrot, celery and wild fennel flowers for native bees – there are plenty of the European variety, but seemingly not many natives. Looks like it’s time for some drastic hotel renovations!

2 Responses to “Katrina Forstner – native bees and much more”