Marina Bistrin visits the garden of Mary and Robert Stringer, from Rosanna. 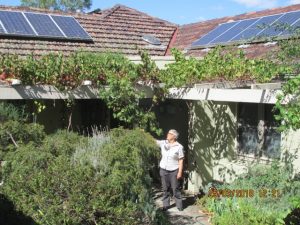 On a hot morning in Summer, I went to the cool, shady oasis of Mary and Robert’s garden. Mary was watering her back garden, where most of the food is grown. Robert had to dash out to do something with bees – looking like an astronaut in a white beekeeper suit.

Mary and Robert have made a permaculture food forest in their backyard from the kikuyu and couch grass lawn that existed when they moved there in 2004. They only retained an orange tree and an old peach tree. 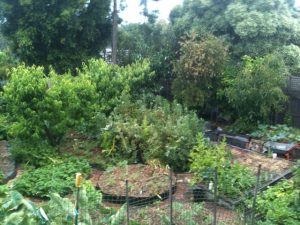 Robert, who handles the machinery, roto-tilled the backyard lawn, and raked the clumps of lawn into large piles which then slowly composted. Then they started to make circular above-ground garden beds built up with plastic and wood edging, with brick paths between them, so that all parts of the garden absorb rain and hold onto water. Some of the garden beds have straight edges, especially along the fence lines, but the circular beds are intriguing and, in one open, sunny spot, they are built around a central bed like a mandala.

Most of the circular beds feature a fruit tree plus smaller plants underneath. Self-seeding annuals (such as parsnip – useful as a companion crop under apple trees -, borage, parsley, marjoram, violets, salvia, and sage) are planted underneath the fruit trees and as cover crops so that there is no bare soil. Mary and Robert also mulch with pea straw, so peas come up too – not an issue for them. The cover crops are only pulled up when something needs to be planted in their spot. They are flowering plants so they provide forage for bees and few weeds get a chance to grow. 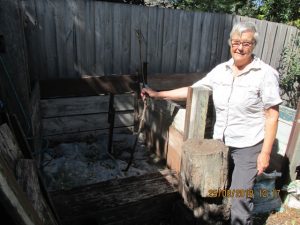 Mary and Robert create their own compost on site, using compost bays, a rotary tumbler and worm farms. The compost bays are turned from one bay to the other as they mature, and horse, cow and chicken manure is also composted there. A major source of the manure is Riding For The Disabled in Viewbank (who ask for a small donation). Coarser material, such as prunings, are put through a petrol-driven mulcher and added to the compost. As well as compost, the soil is also enriched with fertiliser pellets, blood and bone and occasionally lime.

The linear garden beds along the fences contain most of the fruit trees and thus form the basis of the food forest. There are 26 fruit trees including many kinds of citrus, apples, pears, plums, peaches, nectarines, figs, tamarillo, avocados, persimmons and nashi pears. There is also a berry garden featuring cane-berries such as raspberries, boysenberries and thornless blackberries. Against the south side, a brick wall captures heat and serves as a shelter for tropical fruit such as bananas, babaco and mountain paw paws. This is surrounded with recycled window frames that form a glass hothouse. Another glasshouse is used for the annual tomato plants, capsicum, eggplants and a dragon-fruit plant. [the picture shows Mary with banana and avocado trees] 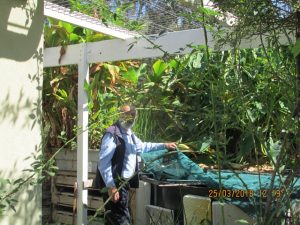 There is an aquaponics set-up in the west facing frontyard which is used to grow water plants such as taro, watercress, water celery, water chestnuts and arrowroot. [the picture shows Robert with the aquaponics] 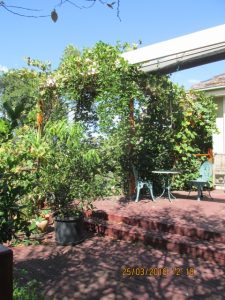 The house has been retrofitted to capture winter sunlight and passively warm the house by warming the natural dark slate flooring in the north-facing kitchen/dining room, while in summer a pergola has deciduous grapevines shading this area over the deck outside. The walls of the double brick house are covered with styrofoam insulation hidden with a natural looking render. There are also 2Kw of solar panels, a solar hot water system and 20,000 litres of rainwater tanks. [the picture shows the grapevines shading the back deck]

A log is kept of everything that is harvested and this helps in monitoring what is produced and at what times of year.

It’s a very beautiful and productive garden and a fantastic sustainable use of a suburban block of land.