In my experience, gardeners very often find it difficult to distinguish between the different culinary members of the origanum genus. This is not surprising as many plants are mislabelled when sold, the common names can be confusing and there is an array of species with flowers of varying colour, not to mention a range of ornamental plants in the genus. The main culinary plants are: 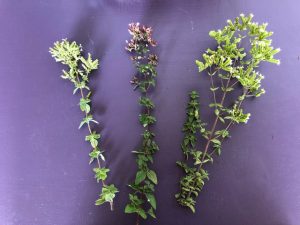 In the photo, Oreganum vulgate is on the left, Origanum onites in the middle and Origanum majorana on the right.

It is useful to be able to distinguish one from the other because they range in taste from savoury to sweet, and from hot and spicy to mild or bland.

Origanum vulgare (oregano) is best bought as a plant. It should have lightish green, pointed leaves that are relatively small and have a matt or dull appearance. It is a groundcover but, when flowering occurs, it develops long stems and the leaves which grow up these stems become smaller as they climb toward bracts of white flowers. The taste should be hot and spicy. The reason that this oregano is best bought as a plant is that oregano grown from seed is usually very bland. It has larger leaves that are a mid to dark green and mauve or pinkish flowers. From a culinary perspective, it is disappointing, being almost flavourless. Bought plants, on the other hand, are usually the aromatic hirtum subspecies, which is flavoursome and can be used in savoury dishes.

Origanum onites (pot marjoram) looks very similar to seed-grown oregano. The leaves are larger and spade shaped, dark green with a purple underside. The flowers are pink or mauve and rise out of the groundcover on long stalks at flowering time. This is a milder herb and is ‘thrown into the pot’ to flavour stews, casseroles or whatever is simmering on the stove. It is also used in pizzas and pasta dishes.

Origanum majorana (sweet marjoram) is entirely different in taste to the two above. It has a sweet, musky fragrance. While it is often added to meat dishes in the last few minutes of cooking, it is best used with egg or soft cheese (such as cream cheese). Mashed into the latter, it makes a delicious dip or spread. Origanum majorana grows to a height of about 30cm but, once it flowers, it doubles in height. The leaves are small, velvety and either mid green or grey-green. The flowers look like knots and are white on green knots and not especially attractive. It is because of this knot-like appearance that it is sometimes called ‘knotted marjoram’. It is very attractive to bees.

The origanum genus belongs to the family Lamiaceae, which is commonly known as the mint family. It is native to the Mediterranean region and all three herbs discussed above thrive in hot, dry, mountainous conditions. In fact, the name ‘origanum’ means ‘light of the mountains’. Origanums are perennial in Australia but are treated as annuals in colder climates.

To get the best flavour from these herbs, and in fact any Mediterranean herb, plant in poor soil and under-water rather than over-water. Under-watering allows the essential oils to develop and consequently provides strongly aromatic foliage. Herbs that look lush are to be avoided as lushness comes at the expense of flavour. These herbs are best harvested early in the morning and before watering.