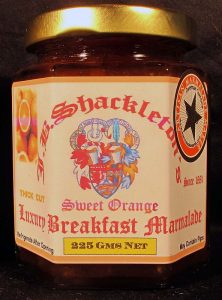 J.B. Shackleton’s make traditional homemade marmalade, jellies, jams and spreads using recipes handed down through their family for more than five generations. Specific products include marmalade (orange, tangelo, cumquat, lime, lemon, grapefruit), jellies (quince), jams (raspberry, boysenberry, blackberry), various honeys and panforte. Everything is made by hand, in small batches, using natural ingredients, and with all the fruit from Australia. Because they use fresh fruits, availability depends on what is in season.