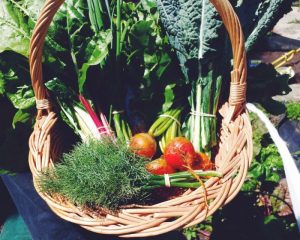 They follow organic and regenerative principles and hope to nurture soil life to create to healthy food. They grow without any nasty chemicals and prioritise Aus Certified Organic inputs (although they are not Certified Organic). They have had our soil tested to confirm their farm’s produce is free from heavy metal contamination.

As an urban farm, Spoke and Spade are growing a story for people to eat and connect to the place they live and to the farmer they purchase food from. Their aim is to encourage connections through food. From farmers to families, neighbours to soil health, and recipes to the local grocery store – all upheld as important parts of life. They hope to create not just good food in the local economy, but a greater sense of place in community. They hope to change, challenge and improve on food systems locally and abroad.

Sim’s website is very informative, inspiring and has a lot of great photos and also lists of produce for the month. As he says on the website: “Volunteer for a box of farm goodies, conversation and garden learning. Or do you have a big backyard or vacant block? Get in touch and lets see if we could grow food on your urban block too!”

Also from Sim’s website: “Who works at Spoke & Spade? When I say we, I mostly mean me (Simeon), but ‘we’ does have a nice ring to it. We is: you, as you participate in traditional and sustainable food systems; locals who entrust land to me; chefs who make tasty meals; friends who volunteer time and eat the freshest food it can buy; artists like Kelsey Reist who create and capture photography; farmers who mentor me; and the movement towards a more sustainable future.”