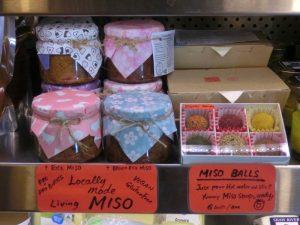 Cooking With Koji do Japanese homestyle cooking, based on fermented foods, and mostly vegetarian and vegan. The beauty of fermentation is that it enhances the flavor of ingredients and increases their nutritional value while at the same time making them less perishable. The Japanese have traditionally made full use of the technique of harnessing micro-organisms to produce and preserve diverse foods. At the foundation of this culture is koji, (the fungus Aspergillus oryzae).

At markets, they sell miso-based products, where miso is a traditional Japanese seasoning produced by fermenting soybeans with salt and koji. They also sell ready-to-drink miso vegetable soup.