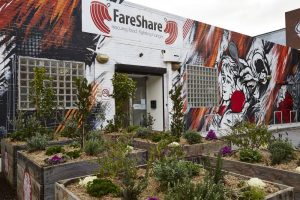 FareShare rescues food that would otherwise go to waste and cooks it into free nutritious meals for people in need. In Melbourne, with the help of 900 regular volunteers, it cooks around 5,500 free meals a day (i.e. around 1.3 million meals a year) for charities such as soup vans, homeless shelters, women’s refuges and community food banks. Its rescued food comes from supermarkets, wholesalers, farmers and other businesses (they have eight vans that collect produce from Woolworths stores and others). By avoiding food waste, and diverting surplus, edible food from landfill, it also reduces greenhouse gases. Its Melbourne headquarters is in Abbotsford.

Fareshare is a charity which relies on donations. Donate now.

Sourcing enough fresh vegetables to add nutrition to meals is one of FareShare’s biggest challenges. It now has three sites in and around Melbourne where it grows its own vegetables, harvesting around 40 tonnes per year. One of those sites is in Abbotsford, which was previously disused VicTrack land but now grows a range of vegetables on 70 beds tended by volunteers, who are overseen by a Garden Manager. The choice of vegetables grown is dictated by the needs of the kitchen, which means that there is a focus on capsicums, carrots, celery, eggplants, leeks, parsnips, pumpkins, sweet potatoes, turnip and zucchini.