For details of our local mushroom growers and kit providers, see the relevant part of the Local Food Directory.

Of the 12 species of mushroom that, according to Wikipedia, are commercially cultivated, at least 6 are commercially cultivated and sold in North East Melbourne, namely Swiss/button (Agaricus bisporus), oyster (Pleurotus sp.), shiitake (Lentinula edodes), enoki (Flammulina velutipes), shimeji (Hypsizygus tessellatus) and the lion’s mane (Hericium erinaceus). Most of the local mushroom growers tend to focus on either Swiss/button or oyster mushrooms.

The table below lists some of the local mushroom growers, including what types of mushrooms they grow and where you can buy them. 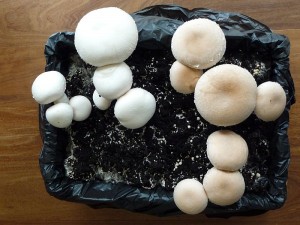 As a reasonably serious home grower, I naturally think that the best veggies are the ones that I grow myself. So it is with mushrooms. The obvious way to grow mushrooms at home is from a kit. For many types of mushroom, such a kit is simply a box or bag containing spores ‘hidden’ within a suitable growing medium. You just place the box/bag in a suitable place (e.g. inside, but not in direct sunlight or next to a heater; contrary to what some people think, darkness is not required), water it every day (by spraying), and, after X days, a whole bunch of mushrooms suddenly appear. And, to some extent at least, they are ‘crop and come again’ for the next few months. As long as you do the watering diligently, success is almost guaranteed (i.e. I have always succeeded). 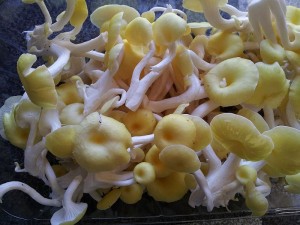 For some types of mushroom, however, a more specialised kit is required. For example, shiitake mushrooms are usually grown in logs (of particular trees only) and seem to require a combination of skill, technique and luck to grow successfully (i.e. I have never succeeded).

When I was starting out, I used to buy my mushroom kits online. But since moving to North East Melbourne, I have been able to obtain my kits from local producers. Luckily, such kits are available at very affordable prices from local mushroom growers for all types of mushrooms. 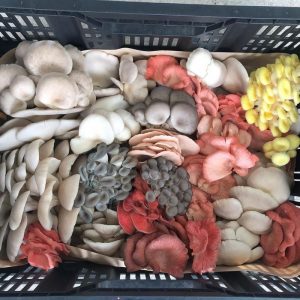 If you want to grow your own mushrooms, but want to understand more than you can from the instructions that come with the kit, there are often local workshops that you can go to.

And finally, and perhaps most importantly, if you just want to buy some local mushrooms, there will be at least one mushroom stall at most of the local farmers’ markets and many of these local mushroom providers also sell online.

As an aside, if, like a friend of mine, you want to pretend to be growing your own mushrooms (to impress people?), you can always buy a shoe box and place some bought mushrooms in it (see picture right, where the regular spacing of the mushrooms is the giveaway).

Finally, why do you think that mushrooms sometimes appear in large rings (known as fairy rings)? This becomes explicable if one understands that a mushroom is not actually an ‘organism’ but, rather, is ‘the fruiting body of an organism’. The organism itself comprises hair-like filaments called mycelium (my-seel-ium), which are underground and thus never seen. A mycelium spore will grow outward from where it first alights and, if not inhibited, will grow equally in all directions. Its outermost extremities will therefore form a circle. As the nutrients in the centre are gradually exhausted, the living part will eventually become the outermost circle. And, by changing the constitution in this outermost circle, the circle might still be apparent even if there are no longer any mushrooms.