Costa Georgiadis made time during his visit to the Forum on Monday 21 November to create a ‘Costa live’ video, which you can view here.

What is Urban Agriculture?

Urban agriculture and urban food production may include:

Urban agriculture and urban food production can exist in many forms and on a variety of sites such as: 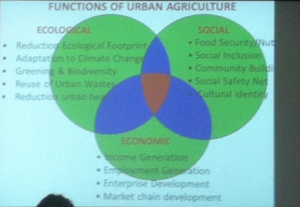 Slide taken from keynote presentation: “The Role of Urban Agriculture in the development of healthy, sustainable and resilient cities” – Henk de Zeeuw.

Henk gave examples of projects that have responded to challenges in each of three areas – including peri-urban farms with short-market chains and factories that use the waste-heat for rooftop greenhouses for urban agriculture.

General Lessons Learned about Urban Agriculture (according to keynote, Henk)

How does Urban Agriculture Reduce Poverty, Food Insecurity and Malnutrition?

Role of Local Government and noting the Food Governance Taskforce

The Role of Social Enterprise in Urban Agriculture