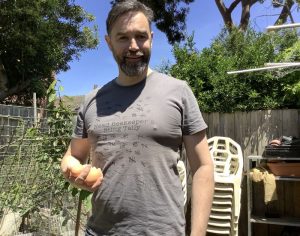 As well as managing the Crikey website in his day job, Adrian O’Hagan is a permablitz enthusiast, permaculture gardener and beekeeper. The day before our interview, however, Adrian had his first anaphylactic reaction to bees so when he greeted me at his front door he had the kind of swollen lip that people in Hollywood and elsewhere pay good money for. I’ll let him tell the story.

“It was in Ashburton. I had just done an extraction, I was suited up, and I got stung on my lip through the veil. I walked away from the hive knowing that the sting was still in there but I still had the veil on and my hands were sticky. Within ten minutes, I passed out. When I came to, a very worried host offered tweezers to remove the sting, but I asked for a credit card to fling the sting off without forcing more of the venom into the lip, which tweezers would have done. The experience certainly freaked out both the host and my wife Sandra when she got the 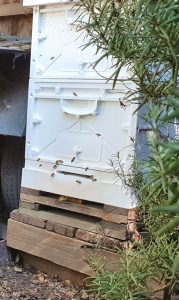 phone call! An ambulance and a MICA arrived, I was given two doses of adrenaline and taken to hospital.“

Adrian has had multiple stings before, but none that has led to an anaphylactic reaction, so now he has two Epipens, one for the beekeeping kit and one for all the time. He believes that hobby beekeepers are more likely that full-time beekeepers to develop anaphylaxis because the full-time beekeepers are stung more often and therefore have more consistent exposure to the venom. He has since undergone a de-sensitisation program, which has proven to be quite successful. He’s been stung a number of times since with no ill effects.

“There have been learnings“, says Adrian. “One is that it is good to have an extra person during extractions which is when stings are most likely, so that if something does go wrong there’s another experienced person there.“ 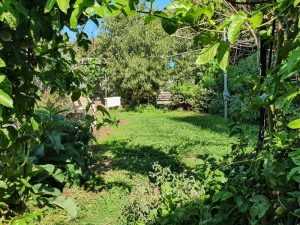 Currently, he has six hives in his own garden in Forest Hill where he lives with his wife Sandra and their family. When they moved in about twelve years ago, at the end of the Millenium drought, there was not much in the garden except for the white peach tree that is still in the south-facing back yard. Says Adrian, “I needed a mattock to break up the clay and the first thing I planted was a stick of rosemary.” That stick of rosemary is now a huge bush.

Next, Adrian planted a star jasmine in front of a bedroom at the east of the house so that his son could look out at something that was not a fence. This area now also has a three-year-old banana tree that has so far provided three hands of bananas. It is planted strategically next to the hot water service, which Adrian knew would provide the plant with the tropical microclimate that it needs. There was, for a time, a coffee bush there too which once yielded enough for two cups of ethically sourced, low carbon miles coffee and some 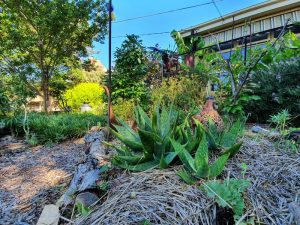 chocolate coated beans to go with it. Unfortunately, while Adrian and his family were holidaying in Tasmania, his father-in-law chopped it down because he thought it was too close to the house.

Making good use of the margins, Adrian has kiwifruit and two grapevines growing in a dead space between brickwork and a fence and there is a three-year-old passionfruit which has done well despite having a quiet first year.

All the tomatoes are in wicking pots in a hot spot on the patio. Adrian is experimenting, following Justin Calverly, with growing his tomatoes laterally, as nature intended, instead of staking them to grow vertically. This hot spot is also where Adrian grows his 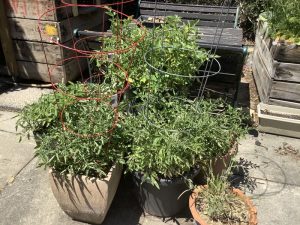 strawberries (which his young daughters eat before they get anywhere near the kitchen) and blueberries. The alpine strawberries tasted like delicate fragrant sweets.

With a nine-to-five job, a family and several other commitments, Adrian has limited time to spend in the garden and finds wicking beds invaluable. Adam Grubb helped him with the first one and Adrian has since built more, some of which are overgrown or housing self-sown veggies. He describes his garden as “not exactly straight-lined“, yet the site is productive and full of life. There are numerous apple trees, an apricot, feijoas, a lemon tree, a prolific loganberry bush, and bumper crops of cauliflower and broad beans. Amongst all this lives rocket, chamomile, parsley, rosemary, calendula, hydrangea, self-sown strawberries, edible weeds and many other species. Some broccoli has been left to go to seed for the benefit of the bees, after which it will be thrown to the chooks. 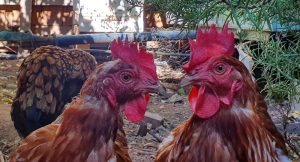 There are quite a few chickens of various breeds including wyandottes (which Adrian has a fondness for), one araucana, and a brood of fluffy speckled Sussex chicks. He keeps the chicks separate from the big birds until they are about eight weeks old so that they are not killed in the sometimes brutal process of establishing the new pecking order. Adrian notices that most people who have chooks are really bad at maths and find it hard to stick to the allocated number that they are supposed to have!

Adjacent to the chicken enclosure there is a pond full of azolla which the bees sit on to drink and which the chooks eat. The chooks have fertilised the soil around the fruit trees and the peach tree is laden with fruit.

When I ask Adrian how he became interested in growing food, he explains that, as a child, he was “not the slightest bit interested” in gardening but that his father had had a plot in Australia’s first community garden on Jolimont Road in Forest Hill, a garden that just celebrated its 40th birthday. This may be why Adrian in adulthood was inspired to grow a capsicum plant in a shady strip at the back of a unit he once rented, which did well despite its less than ideal home. This led Adrian directly to Permablitz, as he explains:

“That capsicum was my first stab at growing edibles and I wanted to get better at it, so I borrowed Costa’s Garden Odyssey DVD from the library. The fourth episode featured a segment about Permablitz with Dan Palmer and Adam Grubb running the show. I thought this was awesome. By the time the episode was finished, I’d found the website and signed up for their mailing list. I just thought the whole concept was so cool.“

Impressed with the organisational structure of Permablitz, Adrian soon found himself “part of something exciting“, using his experience in digital campaigns and marketing to re-build their website and communication channels. This gave him more job satisfaction than his then day job which he saw as “mainly contributing to people’s credit card debt“. Adrian has been involved with Permablitz ever since.

“It’s all about finding your niche”, he says.

Adrian believes in community, knowing that it is much easier to see your own impact when you are working with others. He knows that many other people want to get their hands dirty and to feel connected to a community, working for the collective good. Speaking both of his weekday workplace and of his community involvement, Adrian uses phrases like, “everyone knows everyone else’, “everyone knows their job“, “trust and respect“, “reciprocity“, “generous people giving their time” and “everyone being there for the right reasons“.

Permablitz started with Dan Palmer working with recently-arrived El Salvadorans in the Dandenong area who were having difficulty establishing themselves. Dan suggested making a garden, something they could do together as a bonding experience. It was successful – there was even dancing at the end of it! It grew and grew and was eventually supported by the city of Dandenong who saw the social benefit of it.

If you would like to have a permablitz at your own garden, the organisers recommend that you attend at least one permablitz in someone else’s. If you can’t get into one because they book out quickly (“sometimes in 12 minutes. It’s insane!“), let the organisers know of other places you have volunteered, perhaps at a community garden, and they may be able to get you into one before it is publicised. If you attend two or three permablitzes then you are entitled to your own.

“We try to make it as easy for people as possible.“