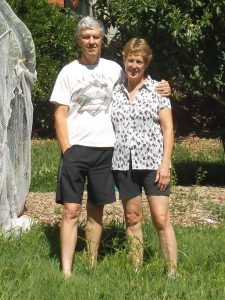 Marina Bistrin visits the garden of Stuart and Christine Rodda, from Eltham. Stuart has made several contributions to this website, including an article about terra preta, biochar and leonardite

I visited Stuart Rodda’s garden in September 2018 in the East (country side) of Eltham after his compost making had been featured on the ABC Gardening Australia TV program. Whilst Stuart is responsible for growing the produce, his wife Christine is responsible for preserving all this produce by bottling, drying, freezing and cooking up pasta sauces. They also share excess produce at food swaps or give to family and friends.

On Stuart and Christine’s property, there are lots of different plantings in a large area like a grassed amphitheatre spanning a valley, a little over an acre in area. There is a lot of sun coming onto the central veggie beds at the bottom of the valley. There is also a frog bog down there that dries up in summer, just next to the veggie beds. You can hear the frogs croaking – Stuart thinks that they burrow into the mud in the summer when the water dries up. This ‘soak’ area has been fantastic for growing veggies and allowing deep, fertile, friable, dark soil to be created here. The soil is at least 50cm deep, has the Eltham clay under it, and hardly ever gets totally dry. The fact that the land was previously an 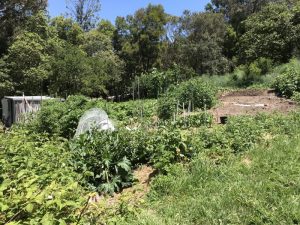 orchard and actually had soil was one of the main reasons for Stuart buying it 40 years ago, so he could grow food. It is a natural watercourse, and he was able to build his family home, overlooking the valley and providing open space for his new family to grow! Many people in Eltham live on slopes of poor clay with lots of trees and find it difficult to grow food, so I was impressed with what Stuart has managed to do with terracing, his choice of site, and how the clay has been used to keep water on the property. He also uses a lot of recycled items in making structures in his garden and gets lots of his compost ingredients for free.

From the street entrance, you see a shady planting of carob trees and a few citrus trees in an adjacent garden bed. A visiting deer has nibbled the smallest citrus and the apple trees, but apparently no longer visits the garden (which is a 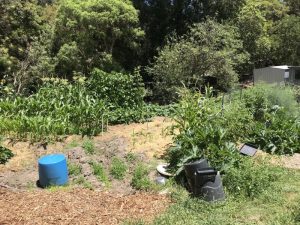 blessing). The house and garage are at this higher elevation at the eastern end of the property. There are narrow terraced beds on the north side of the house, with citrus and fruit trees that are kept small, including a dwarf peach that Stuart is particularly fond of. Closer in, near the house, are even narrower, steeper terraces. In this compact area on the higher beds are apples, peaches, nectarines, an orange and a new persimmon tree. In the lower beds, strawberries grow, including a white wild alpine strawberry that doesn’t mind part shade. These terraces don’t receive much water, but are heavily mulched and do well.

Many fruit trees, herbs and veggies are scattered around the property, but the main veggie growing area is at the centre of the property at the bottom of the valley where the water gathers. Rabbits used to eat the veggies in these beds and they used to be 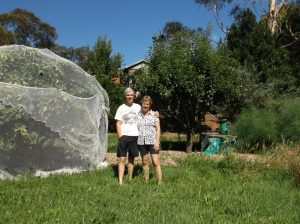 fenced off; Stuart realised, however, that the foxes were keeping the rabbits at bay, so the wire mesh fences could be taken down. An old man kangaroo is a regular visitor but he doesn’t eat the veggies. Much of the fruit from the taller un-netted trees gets eaten by birds, but many of the shorter pruned trees can be netted, and the numerous citrus trees don’t need it. The fruit trees include: lemons, mandarins, tangelos, oranges, grapefruit, lime, white and red cherry guavas, chilean guavas, feijoas, various plums, dwarf peaches, nectarines, two types of fig, various apples, loquats, hazelnuts, nashis, mulberries, and even a macadamia nut. 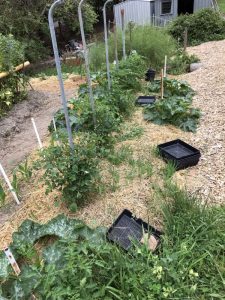 halfway up the hill on the other side above the veggie beds, near some fruit and nut trees, so the trees are well watered whenever there is a rain event as the excess water descends to the veggie beds. The different veggies to be seen in this central depression in early Spring include long-established asparagus beds, silverbeet, broad beans and snow peas. Parsley has grown from one initial plant via re-seeding into varied forms – some like tight curled English parsley, some like Continental flat-leaf parsley and in-between variations. Berry vines include raspberries, loganberries and the thornless youngberries (these last, Stuart has shared at the Eltham Food Swap). There is also a passionfruit growing up against the garage wall and, as passionfruit is short lived, Stuart plants new vines alongside about every 3 years so he keeps getting a crop.

Stuart puts in green manure crops over the winter in some parts of the veggie patch and then digs the crops in – occasionally double-digging the soil to increase its depth. Broad beans are held up by long lengths of plastic-slotted stormwater pipe that were lying around, supported on stakes. This is better for the beans than creating a ‘fence’ around them with string, as that tends to break the stems. Free or recycled materials are used when possible (for example, old galvanised iron water pipe) as long lasting ‘stakes’ for tomato growing, and torn up strips of old cotton sheets to tie up the tomatoes to the ‘stakes’. 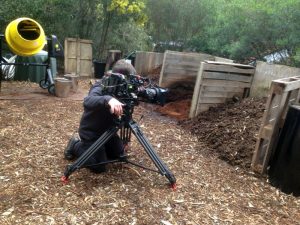 Most of the ingredients for making Stuart’s compost are free. Biochar is made using wood off-cuts given to him. Reground delivers coffee grounds and chaff (coffee husks) in wheelie bin loads. (Reground turns coffee waste into a resource by bringing waste from cafes, roasteries, businesses and offices back to community gardens and home gardens.) Stuart also gets wood shavings and horse manure for free. He does buy powdered brown coal (lignite) from a Bacchus Marsh coal mine by the trailer load, and also buys some basalt dust from a Northern suburb garden supplier to add to compost. Plus he has a bucket of trace elements he has bought long ago and just adds a pinch of this to his compost preparation. All these elements are mixed in a chrome yellow, squeaky clean cement mixer and left to mature in compost bays. This is then driven around the property to where it is needed using a small ride-on mower with a trailer attached. Stuart is a retired scientist and loves to experiment. He thinks that the brown coal has great water and nutrient holding capacity, while the biochar has similar properties but with larger pores, the combination turning his dense clay into a better textured, friable soil.

He has also bought a small electronic pH meter – the soil is mixed with a few drops of water and placed on the little screen to give a reading – much more accurate than the test kit using powders that are the easiest ones to get. The pH of his soils are in the range 6 to 7 (neutral).

He has also uses sheet mulching with newspaper covered with wood chips or wood shavings on areas where he wants to suppress grass and weeds, especially on the property boundary and garden paths.

It’s a varied, delightful and fertile garden – it was a real pleasure to visit it.