In August, I will plant a wide array of flowers in my orchard, both to attract bees for increased pollination and to attract beneficial predators. Beneficial predators will assist me in my strategy to eliminate codling moth and Queensland fruit fly from my fruit by eating on them when they are at the soft body stage of their lifecycle. I’m sourcing and sowing seed in trays right now (late June), and dividing suitable plants in my garden. Chamomile is a plant that I will be using a lot, but which one should I choose?

There are many plants in the chamomile ‘family’ but only three are commonly used and they are often confused. One, Chamaemelum nobile Treneague, does not flower at all and so would be a very poor choice! The other two are the annual Matricaria recutita and the perennial Chamaemelum nobile.

Chamaemelum nobile Treneague’s common name is lawn chamomile. It is a low growing ground cover, highly scented when walked upon, and can only be propagated by root division. To do this, buy a pot or, better still, a tray, and further divide the plants into seedling trays until you have enough to plant your area. Plant out in spring, spacing the individual plants no more than 6cm apart, so that they will spread to form a mat. Because you will be planting into bare (prepared) earth, regular weeding is essential, and also regular watering in the establishment stage. Remember that it never flowers! 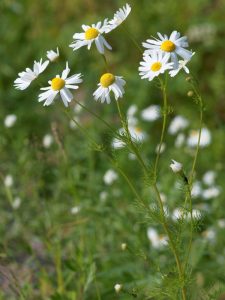 Matricaria recutita (also known as Matricaria chamomilla) is commonly known as German or wild chamomile (or, less commonly, as blue chamomile because its essential oil is blue). This is the plant of choice for chamomile tea, being sweeter than the perennial Chamaemelum nobile. It is an annual and can be sown direct into the soil where it will germinate in spring in about 2 weeks but it does need a weed-free bed to succeed and to be well watered in its early stages of growth. Pressing the seed into the soil is important as the seeds are so tiny that they may not connect sufficiently with the soil to germinate. This is only a problem if broadcasting the seed. I walk on the seed after sowing to achieve this. This particular chamomile grows to about 60cm in height which is a way of distinguishing it from the smaller Chamaemelum nobile. 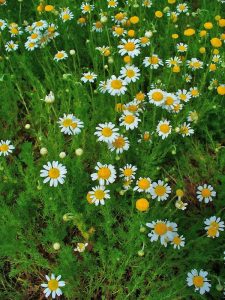 Chamaemelum nobile (sometimes also referred to as Anthemis nobilis) is commonly known as English, Roman or garden chamomile and is perennial. It grows to about 30cm in height and spreads through seed and root. In the UK, where it grows wild, there has been a huge reduction in plant numbers due to land clearing and marsh draining. Although it will grow in drier areas, it prefers damper conditions. It is easy to propagate from seed or root division but is unsuited to cuttings. It can be used for tea but the flowers have a bitter taste. It can also be used for lawns, and mown to remove the flower heads, but does poorly if walked on regularly.

All the chamomiles are in the Asteraceae, or daisy, family. The flowering varieties have an abundance of small yellow and white flowers. Yellow and white flowers are particularly attractive to beneficial insect predators (which makes them an excellent choice for my orchard). The fact that they can tolerate part shade and cool conditions also makes them a good choice.

So, which chamomile will I be growing to attract bees and beneficial insects? The answer is both the annual and perennial flowering varieties. But, when it comes to chamomile tea, I will only be drinking the annual, Matricaria recutita.