Judy Vizzari visits the garden of Deb and Peter Thomson, from Research. 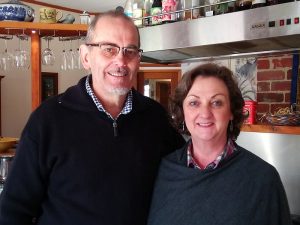 The front of the house is deceptive: a 1930s Californian bungalow fronted by a traditional cottage garden. Then there’s a huge golden Cyprus tree just right of the driveway, it’s enormous and beautiful and frames the property, almost overshadowing it. The house is authentic to its era – green, beige and cream and complemented by stained glass windows and art-deco triangular columns which remind me of friendly old sentinels standing guard either side of the porch entrance. From the street there’s no hint of what’s behind this early 20th Century façade.

Inside the entrance, I’m transported. From the familiar rolling hills, large properties and rural aspect of this little street on the backroads of Research, I enter a 1930s foyer and then, through a set of double doors, pass into a large 2000s open space which is imbued with the warm scents of food and conviviality, it glows with light. 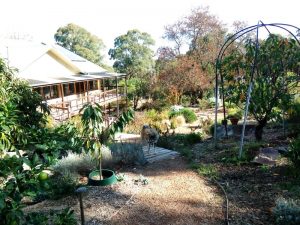 Before me is a floating bar which fronts a distinctive triangular kitchen and beyond is an open lounge/dining area … I could be in a restaurant.

It’s here that I see, through the room’s windowed walls and over its broad verandahs, the one acre garden I’ve come to inspect. There’s the view beyond, too, a landscaped ‘block’ sweeping down to open bushland and, somewhere in the distance, I know there’s Kangaroo Ground and the Panton Hill Road leading out to the Yarra Valley.

The house is the result of Peter Thomson’s effort working with mud-bricks, timber and a talented chippy and, I’m guessing, under the watchful and collaborative eye of irrepressible Deborah (Deb), his wife. Peter says it took six years to build their split level home which, I later learn, includes a generous downstairs pantry for Deb’s impressive array of preserves. The process may have been long and, with a growing family, inconvenient but the effort seems to me to have been very worthwhile.

I’m here to learn about Deb and Peter’s extensive and productive garden, although I’ve been forewarned by Deb that it’s “not a good time“. She says that their garden has been critically wounded by adverse climatic conditions. I’m curious to see the damage.

As the land isn’t on mains water, it relies wholly on the collection of rainwater, grey water and treated sewerage. The sewerage, it seems, is processed using an in-ground Japanese method and provides a valuable resource for the garden. Six water tanks located on the property have, in the past, provided adequate litres annually to sustain the house and garden. But 2018 was different.

Outside, I see a huge green tank lying upended like a beached whale next to a flat, excavated space adjacent two upright and connected tanks and I learn of the intention to install it the next day, thus adding 30,000 litres to the annual water tally. The total filled capacity this year will be 134,000 litres.

Landscaped with an eye on the future 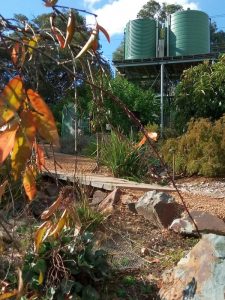 We walk to the top of Peter and Deb’s block – just below street level and gaze back over the valley below.

To our right is a neighbour’s sloping space which extends to a ridge and is dotted with mature eucalypts and carpeted with the suggestion of green grass. This is a place where local fauna, including deer, foxes and rabbits, congregate next to our own possums, snakes, wallabies and kangaroos. There are many birds here too, around 40 different species – notable amongst them, two native eagles who dominate the skies. This property seems to be a respite in a menagerie.

To our left is a garage which opens to the street, then the traditional front garden laid out with contained geometric flower beds and herbs.

Before us I see a beautiful panorama of landscaped ornamental and functional beds intersected by paths which wend down to the lower reaches of the block. Peter tells me that the whole area has been landscaped with the future in mind – an absence of steps is obvious, the winding Tuscan topped paths enable easy continuous movement throughout the garden. 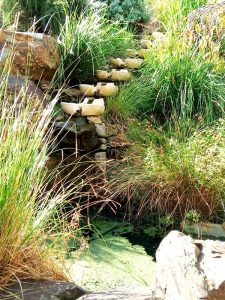 From the four water tanks located at the top of the block (beside the garage), there’s a small stream which collects tank runoff and rainwater. It meanders down between the beds and provides opportunities for low bridges. At one point, it services a cascading series of locally sourced biodynamic flowforms which agitate the water and creates a vortex during the downward fall. The form, which is sculptural, is purpose built to aerate and clean the water before it drops into the ‘billabong’ below.

This method of water treatment is mirrored lower down the property by another series of biodynamic flowforms which adds to another water catchment. They’re functional and beautiful assets to the garden.

We wander past low growing native bushes including grasses, herbs and occasional small trees, including many fruiting varieties. Yes, there is evidence of plants which have suffered the hot summer, but Deb and Peter’s plant choices have been judicious and the overall effect of hardy, grassy mounds interspersed with low growing fruiting trees, remains.

In this part of the garden, I see apples, pears, quinces, stonefruits and citrus as well as native callistemons, banksias, acacias and eucalypts.

“We only eat vegetables that are fresh – we say they’re stale after two hours out of our garden!” Such is their bounty. 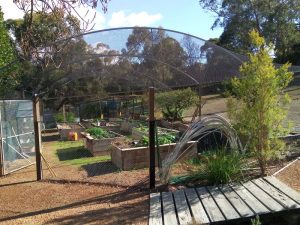 Ahead, as the land flattens a little, is a large area about the size of a half tennis court, protected from that army of predators by a fantastic structure, a metal frame enclosed by fine webbing. Two doors allow entrance and exit and inside are 13 raised boxes which contain, even in this month of May, a variety of lush vegetables, including gourds, beans, Chinese and English greens, broccoli, potatoes, strawberries, onions, garlic and more, even wayward tomatoes. There are vines too (passionfruit and kiwifruit) and fruit trees (citrus oranges, limes and lemons).

I examine the boxes enviously – they’re filled with openly composted soil which is enhanced with chicken manure and straw and watered by the tank reserves. The soil is replenished between seasons and is obviously rich in nutrients.

This bounty is green, orange, yellow and purple and beautiful and, I’m told, it provides adequate supplies for household use and more, it’s shared widely within the community. 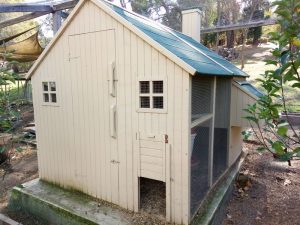 We’re almost down to the bottom boundary now and are approaching the chicken run. I’m planning to add a small chicken coop to my own backyard, so am interested to see this 21 strong clutch of cluckers, healthy looking chickens of various breeds and their proud rooster. Obviously they’re all happy free rangers.

They’re well housed in a palace of a coop and, although two have been lost to a fox and a snake, the rest are well protect by the construction and netting at night and, during the day when they go free-range, by their friendly Akita dog, Tiga, who can’t quite reach them, but who is able to frighten off predators from behind a fence.

Twenty-one eggs a day? Not quite, but plenty for more than this household can use.

Further down we pass an Australian ‘flow hive’ bee hive. They tell me it’s the innovative hive design of the ‘honey tap’ variety invented by father and son team Cedar and Stu Anderson from northern NSW – they’re very impressed with it. The bees produce about 25 kilos of honey each season, a delicious addition to their larder. Another of their benefits is that they pollinate the many plants in this garden, they’re great workers.

With winter approaching, the colony has just been fed prior to bedding down for our cold months ahead.

We’re at the bottom of the block now, at a place where kangaroos have been known to bound over the wire fence, but it seems they prefer wide open spaces to enclosed and cultivated land so they’re not too much of a problem. And then there’s Tiga the dog to deter them, too. 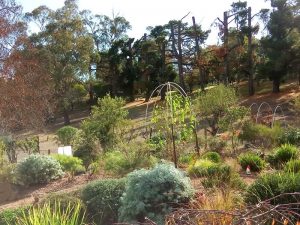 We pass more fruiting trees, including macadamias and bananas, and an open garden containing exotic plants – Deb is an avid collector of unusual species – amongst them vanilla bean vines which are doing “fine” in a small enclosed hothouse and elder flowers (not elder berries) from which she made elder wine. Not all her exotics survive our fairly harsh winters, but she loves to find out which will.

En route we’re now travelling up the slope towards the house. There’s a stand of oak trees here, which aren’t old but they are tall. The bottom two thirds of their trunks are completely bare of branches as lower limbs have been removed to let light filter down to the ground below them, ground barely dotted with low grasses. At the far side of the copse is a hazel nut tree, too. 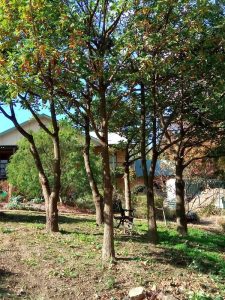 Peter explains, with a mischievous grin, that this is “just one of Deb’s follies“. “Why,” I ask, puzzled. They both laugh and let me in on the secret – this is their black truffle plantation!

Truffles are exotic, I know, so exotic I’ve never had a chance to try them but I’m assured that they’re “out of this world“. So good, in fact, that Deb and Peter have been trying for some time to grow them (without luck). But last season new spores were sourced and planted and now the suspiciously absent weeds below the trees point to perhaps this being the year for for them to appear. It seems they’ll know quite soon as as they’ve arranged for ‘truffle dogs’ to come from Howqua to sniff out possible fungi. I’m curious to know whether they’re successful.

Back at the lower level of the house are the verandah supports, heavy wooden beams and twisting around them are grape vines now dressed in autumn colours. On this mild morning they are beautiful. 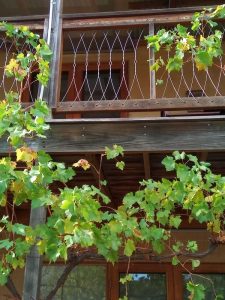 Inside we detour into the pantry which is stacked with preserves – jams, jellies, chutneys and all manner of conserves. I’m lucky to receive some plum sauce, grapefruit marmalade and apple butter which was sourced from their heirloom apples. Back upstairs, Deb returns to a huge pot of sliced fruit waiting on her stovetop – her morning’s task is to preserve quince slices – nothing’s wasted in this household.

This morning has been one of discovery and pleasure. I’ve enjoyed meeting such charming and industrious hosts, of seeing their beautiful garden, discovering many known and unknown plant species and I’ve appreciated their generosity and willingness to share.

I leave with a heightened sense of well-being and the memory of a beautiful place.