In May 2021, Judy Vizzari visited the garden of Jian Liu, from Camberwell. In the same month, Jian’s garden featured on Gardening Australia – watch the 7 minute segment. She has a popular Instagram page and has written articles for this website on both ponds and worm farms. 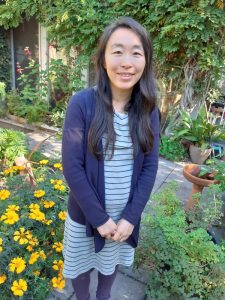 Before I arrive at Jian’s house, she texts these instructions … “I will leave our front and side gate open, just come through to our backyard tomorrow morning.”

The drive from Eltham (where I live) to Camberwell is only 30 minutes but the change from outer eastern Melbourne to eastern suburban Melbourne is enormous. The place I leave behind has its own beauty – its muted greens, tall eucalypts and liquid waterways – but at this time of the year Camberwell is submerged in a massed display of brilliant reds, oranges and yellows. Autumn leaves hang from limbs, float in the air and carpet the ground – the streets radiate colour. I wonder whether this display will be evident in the backyard I’m coming to see.

Jian’s house is hidden behind a high brick fence which is rendered and secretive but, yes, there’s the open gate.

Inside, right and left of the gate, are small garden beds and before me, quite close, is a 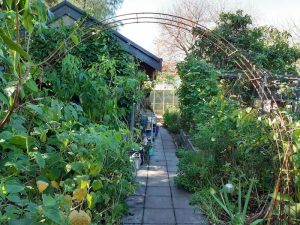 large and solid frontage of what appears to be a 1940s double brick home. Concrete squares define a path which leads down the side of the house to the backyard. I venture down, passing a large water tank and a narrow fence-line garden bed.

I’m transported into another world, this time the greenest of jungles.

The back of the house has undergone some major renovations and I can see that a glass wall extends across a large family area. Inside are Jian and her husband, Julian. I knock on the door and she greets me with a cheerful smile. First impressions? Petite, long dark hair, casual dress, quick smile and an ability to talk faster than most – I’m prompted to turn on my phone’s audio recorder. 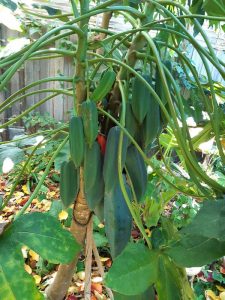 Jian tells me that this is a young garden – the house had been owned by her parents and, before them, the previous owners had landscaped the space well, but not in a style that worked for her as she wanted both a productive and pleasurable garden.

So commences our wander through a lush food forest.

First, we look at a small fish pond which existed before Jian, her husband and two small children moved in. Initially it was in poor condition and the water was always green with algae, so she experimented to improve the water quality and eventually learned what worked best (Jian has written an article for this website which follows that journey).

To walk through Jian’s forest is to enjoy a range of interconnected plants which survive according to their needs – sun, shade, moisture, soil, pollinators and companions. Like other food forests, 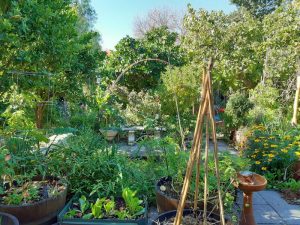 Along the northern fence, in the ‘shady’ zone, there are tropical and Southern American plants: babacos (champagne fruit), a tamarillo tree and a few Avocados. They all thrive in the partial shade of the fence and enjoy their understorey of ground plants which includes taro, several members of the ginger family (turmeric, cardamom and galangal), blending with mixed herbs, ornamentals and banana passionfruit. 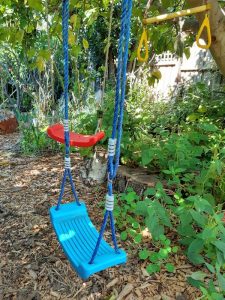 In the more exposed centre of the yard, two mandarin trees and a large grapefruit tree thrive. “Citrus goes nuts in our garden,” Jian says, one of the few benefits of the extremely sandy soil in the yard. It is well supplemented by the addition of natural fertilisers including compost, comfrey, worm castings and worm juice plus (recently) some irrigation.

In this area, two large fig trees work together, one producing inedible figs (a caprifig) to pollinate the other and the second to produce kilos of heirloom purple figs much loved by Jian’s family. The pollinating tree also acts as a climbing frame for an amazing vine (fig leaf gourd) which, Jian says, produces many summer gourds – it must look impressive when ‘dressed’. The ‘hanging’ theme is repeated close by: further arches are covered with more cucurbits and runner beans and, threaded through them are small, clear, solar globes which light up at night. Below is a lively blend of herbs and insect attractors.

Further over towards the southern fence there are fruit trees, berries (cape gooseberry, elderberry), passionfruit, more citrus, arrowroot, a range of herbs and a play area for Jian’s two children. But this 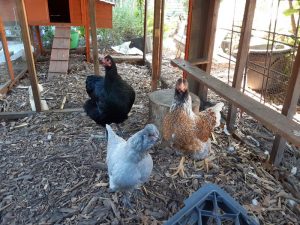 whole garden is really a play area as it provides so many twists and turns for them to run, to hide and to pluck and consume the juiciest of fruits and berries.

At this point I see a rustic chicken coop with three heritage chicks and I learn that, while they are all good layers, one actually produces green eggs! Well, not eggs of the Dr Seuss variety, just delicate green eggshells. The coop looks to me like it’s worthy of a AAA rating – morning sun, summer shade, made from recycled materials and perfect for ‘the girls’, who are now curious to eye their visitors.

This forest, it seems, is a never-ending project.

In the space of just a few years, the original couch grass lawn in this garden has been replaced by mulched paths, garden beds, 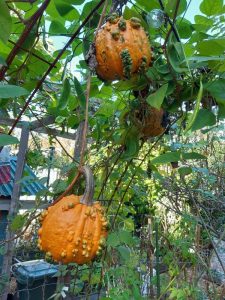 irrigation installed, a greenhouse erected, water tanks put in, new plots added and plants incorporated to either replace those that die or to utilise every available corner. There’s no grass any more (Jian dug it all out). Paths wend through the forest and are defined by the areas they contain.

Who hasn’t got possums? Jian has, but she’s learned to live with them – she plants citrus trees (it seems they don’t like them) near fences as a deterrent but allows her furry guests to use a hardy wisteria vine to traverse the yard and to access a large ornamental pear tree. Being on the north side of the yard, Jian says that it sheds too much shade in the garden and has dreamed about removing it , but it’s a favourite destination of the possums so it stays – they’re better there than nibbling on her peaches and beans. There’s give and take in this garden, a balancing act with nature.

A busy working mum, what inspired her to take on this project?

Jian tells me that she was born in the enormous Chinese metropolis of Beijing. The family lived in her grandmother’s old house in the hutongs near 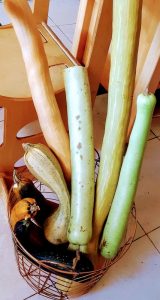 Tiananmen Square, so near that, during the student demonstrations of 1989, they could hear gunshots fired by the government to quell political activists. She was just three years old then, but that memory remains sharp.

Soon after, her mother came to Australia to study and shortly after that her father followed with Jian – a long trip to a very foreign place. Brave and adventurous steps.

A sweeter memory was that of her grandmother, who maintained a tiny but productive garden in a small courtyard with some flowers, a giant walnut tree and a jujube tree (Chinese date). Jian says that she loved spending time there with her. Perhaps seeds planted within her then are now flourishing.

The family moved many times before settling in Camberwell.

Learning to live in Australia, applying herself to studies, marriage, childbirth and a career must have kept Jian busy over three-plus decades, but her challenges and experiences seem to have taught her to be resourceful and committed. Now is the 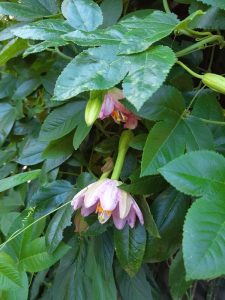 time that she can return to those early memories of her grandmother’s garden, a time to foster growth in a warm, productive and inviting family environment.

A wander-land and wonderland – “I want my land to be productive, I want it to work for me.” Jian Liu

Jian has been warm and enthusiastic and my visit has been memorable.

Here is a video of Jian talking about her garden on Gardening Australia.