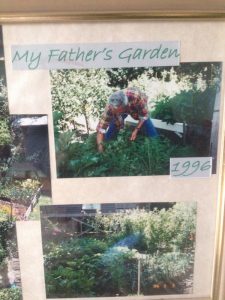 A garden with links to the past

Zofia is the daughter of Polish migrants Czelaw and Janina Holoda who, with lives disrupted by the War, set up home and garden in Thornbury with ducks, chickens and veggies. Zofia has photographs in her house of Czelaw working in his beloved garden. She told me how, in her childhood, the family would travel to the outskirts of Melbourne to forage for mushrooms and how she can still identify some of those that are edible. I hope in this article that I convey the connection that I see between the hope inherent in Zofia’s parents’ act of migration and the garden that now stands as a source of both cultural and horticultural fertility in the heart of Mount Waverley.

A garden that produces food

Zofia’s home-based work as a counsellor and personal growth facilitator allows her to spend around two hours every morning outside. She has a quarter acre block with the house facing north and with both front and back yards cultivated with edible plants. On the nature strip, there is a herb bed with a sign inviting people to help themselves and even a pair of scissors on a string so that people can cut off what they need. 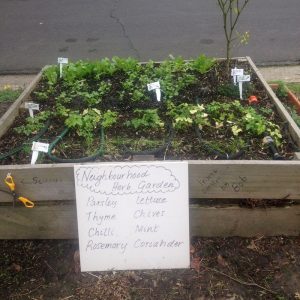 This little raised bed is called The Neighbourhood Herb Garden and it is the first sign of the garden’s role in the lives of people other than the gardener. Passers-by sometimes stop to take some fresh herbs home and talk about the rest of the garden. Some have even offered their own seeds to plant.

There is a healthy crop of cauliflowers growing and I commented that they looked much better than my cabbages which the insects have filigreed. Zofia said that she planted her brassicas late in the season after the cabbage butterflies reduced in numbers.

Another tip from Zofia is that, before planting her tomatoes, she plants a crop of mustard greens which helps to remove the root knot nematodes that can weaken plants. Read the abc website to find out more.

In the garden, there are three espaliered apple trees (kept small to optimise the growing space) strawberries, 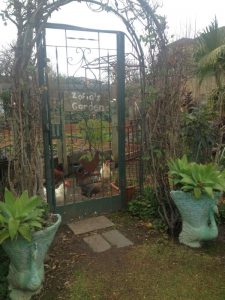 raspberries and volunteer passionfruits, plus many vegetables. Zofia introduced me to a new kind of chilli – Turks Cap chilli – and I was given some to take home. I also have a jar of delicious cucumbers grown and pickled by Zofia. The soil is fertilised with chook pen litter which has been throroughly worked over by Bjork, Lulu, Polly, Violet and Truffle (in pecking order and size), the five pure-bred hens. Two guys from Veg Out built the chook shed and Zofia also has a ‘cooling cage’ for girls who insist on sitting on their unfertilised eggs. Read more about dealing with broody hens.

The garden has a beehive, managed by Peter Dyer from Backyard Honey and Zofia is getting another hive from Adrian O’Hagan of The Bearded Bee.

The site harvests 10,000 litres of rainwater, with every downpipe connected to a tank.

A garden that makes art of hard rubbish

On first entering the garden, I was enchanted by the art that is everywhere, from beautiful 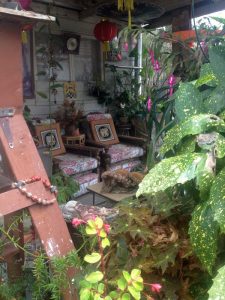 1950’s pastel-coloured ceramic wash-hand basins with plants growing in them to salvaged decorative gates enclosing the chickens and even an outdoor sitting room decorated with parasols, Chinese lanterns and secondhand Jacobean-style chairs. This is a space where participants in the groups that Zofia facilitates can think and reflect.

Zofia, like me, is a lover of hard rubbish, and City of Monash still has a special day on which every household can put their unwanted items on the nature strip for collection. Zofia’s daughter calls it a hard rubbish festival and it is – I’ve gleaned from it with my own hands! Zofia showed me some great gear that she hauled home in the car she had before her current Prius, a twenty six year old Camry sedan inherited from her father.

In Manningham, where I live, alas, there are only bits and pieces of hard rubbish at a time now, with green stickers warning you against adding to or subtracting from the pile. (If you have any moral reservations about gleaning and salvaging, there is much reading you can do which elevates it to the level of high moral, aesthetic and even religious practice.)

A garden that builds fertility from organic waste

What about ‘soft’, organic waste?

Zofia’s composting sytem features five black compost bins, all arranged according to the stage of breakdown and for ease of access. When one batch is ready, the bin just has to be lifted off and moved and the compost shovelled on to the adjacent beds. It’s an example of the importance of a good system to save time, energy and indecision in the garden.

This compost is built from many sources. For example, a local resident collects leftover bread from the local Baker’s Delight, which has a huge amount of waste every day. Zofia says “I go and collect some from her house once a week. I give some to my neighbours and the rest I soak and put into the compost.” As well as this, she collects poo from the local reptile zoo and takes delivery of large amounts of coffee husk as well as coffee grounds supplied by a barista teacher she knows. As Julie Hotchkiss says, “You can get what you want, if you’re willing to look“.

Zofia has made a worm farm in a salvaged laundry trough – still in its aluminium cabinet – and, behind the door, is a bucket into which the worm liquid drains. Another good system.

She also invites neighbours to drop off their raked up leaves. She tells the story of her daughter’s surprise when, house-sitting and relaxing in the sunroom, she saw neighbourhod people making their way into the backyard to donate their compostible waste.

Justin Calverly, horticulture teacher and author of The Urban Farmer, estimates that, to supply enough replenishment to the soil of a productive fruit and vegetable garden, you would need to give around half of the garden over to the production of compost. Zofia must be almost there with the amount of organic material that she imports to her site.

A garden that has roots and branches in the community

The community connection is the aspect of Zofia’s garden that I found most fascinating. She tells the story of her fenced veggie garden which features large triangular garden beds arranged like pieces of pie into a circle, with paths for easy access to the plants. It is beautiful, loosely based on the gardens at Heronswood, and was built by Manoo, a young Kurdish man to whom Zofia had taught English and who went on to become a carpenter.

Zofia clearly enjoys and values the ethnic diversity of the people associated with her garden and I believe that important relationships are being nurtured here. I will let her speak about the role of the nature strip herb bed: “A lot of new people have moved into the area, most of them are Chinese. The herb garden is a way to ‘break the ice’ and I chat with them, get to know them, let them feel welcome. There are some older residents – Greek and Italian – who also have veggie gardens of their own. They love to compare notes, give suggestions. I learn a lot from them. There is one Greek man who grows his tomatoes from seed. He likes to plant one or two in the Neighbourhood Herb Garden. This gives him of feeling of contributing. So does my Indian neighbour who loves coriander and is often sowing coriander seeds in the bed. As I get to know more and more people, a kind of community emerges. Some of this community like to contribute kitchen waste to put in my compost. They feel that they are contributing to the environment. It’s a little gesture, having a Neighbourhood Herb Garden, and yet so much has grown out of it.“

The ShareWaste network is also central to Zofia’s community connections. Again, Zofia can tell the story: “The ShareWaste website has brought around 10 people to my garden bringing their kitchen scraps for my compost. Two of the young women (Emelie and Anoush) asked if they could volunteer working in the garden. They live in apartments and want a chance ‘to get their hands in the dirt’. We have a gardening workout around once a month. They turn compost, prepare garden beds, sow & transplant seeds and seedlings, harvest produce, and help with pickling, dehydrating & preserving produce. They are so efficient. Through ShareWaste, I met a Frenchman, Paul, who is a carpet layer by trade. Paul helps out by going with me to collect horse manure from stables not far away. He’s also helped to do some of the hard labour around the garden – like barrowing the compost and putting it onto the beds. I was starting a new raised bed near my eucalyptus tree. I thought that if I put carpet at the base it might prevent some of the roots getting into the bed so my French carpet layer laid the carpet!“

Zofia also has a neighbour, Bryan, who loves welding and helps when this kind of work is required.

It is clear that Zofia’s garden stands at the centre of a vigorous informal multicultural network and I think the seed was sown, at least in part, by her family’s experience of dislocation. This is a garden that is enriching the culture as much as it is enriching the earth. Though this, and through the artful use of of abandoned objects, it also enriches the soul. Zofia has created a truly fertile place, a place that promotes peace.