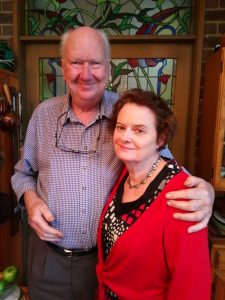 World Champion Traditional Marmalade Maker is just one of the titles Lachlan Shackleton-Fergus can claim. In fact, his list of accomplishments is long, as I recently found out when I visited him and his wife, Julia at their home in Wonga Park. My brief is “to find out about Lachlan’s boutique marmalade making business” but I’m intrigued to discover that he seems to have much more than his marmalade making business to talk about.

I am greeted by Lachlan and Julia at their grand front door. He is a tall, imposing man whose height seems to stem from two surprisingly long legs. He has quick & expansive movements and he exudes generosity and warmth, youthful eagerness and old fashioned courtesy. Julia, by contrast, is small and fair, a ladybird whose beauty is evident despite the passage of time. I’m charmed by their welcome.

This house is large and unusual

Even before entering, I can see that this isn’t an ordinary house. The front door is guarded by two immense Gozitan (Maltese) stone hand-carved lions which are ornate, rather than threatening, and seem to understand that their purpose is not to deter visitors, but to greet them.

In through the front doors and now we’re standing in a slightly confusing space. Lachlan explains that the house has two levels. It’s built on sloping land and we’ve entered via the upstairs residence – I glimpse a huge kitchen/living area off to my right. Directly in front of us is a stairwell plunging steeply to the lower floor which, I’m told, contains among other things, a commercial kitchen.

I’m looking downwards and starting to feel a little like Alice descending into Wonderland …not yet knowing what treasure-trove of delights is waiting below.

The stairwell is hung with an extensive collection of Lachlan’s photographs which include many images of family members in far-flung places and feature Julia in a range of costumes. I’m amused to see a ‘safety net’ strung across the stairwell “to catch falling cats” and it occurs to me that if their cat happens to be a Cheshire, it’s more likely that he’s already sitting on the kitchen bench below, grinning.

The commercial kitchen isn’t big. It’s rectangular, with stainless steel benches and a square stove standing in its own shiny, aluminium foil alcove. On its burners is a pot containing a mix of fruit which, Lachlan tells me, has been simmering for some hours to “soften the skins“. There is a heavy scent of citrus and I imagine how heady it must be down here when fruit, spices and sweeteners are combining. 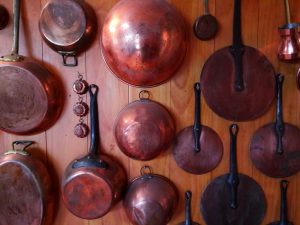 There’s a fridge, a central island bench packed with measuring instruments,  blending instruments and bowls. Suspended from above is a jumble of tools. Against the far wall, shelves are laden with jars filled and labelled with a variety of conserves. To my left is a sink next to a clear workspace dedicated to fruit preparation. I’m nostalgic at the sight of an old-fashioned Sunbeam Mixmaster (“the best” Lachlan says) plus a collection of kitchen aids which are of another time. This kitchen is spotlessly clean and, although it at first appeared chaotic, it’s actually well organised.

How to make the perfect marmalade 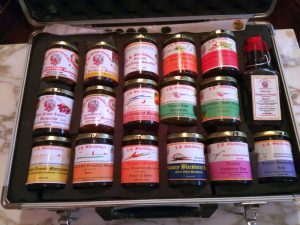 The precise rules of successful marmalade making are something of a mystery to me so my preserves often result in ‘rock hard’ or ‘completely runny’ mixtures, but I know there are some great preservers out there producing beautiful conserves. But how many of these preservers cross cut their fruit to consistent 6mm thicknesses, steep them in filtered water for 48 hours at 5 degrees then slow cook them for 4-5 hours at a gentle simmer before finally finishing the blend in 150 year-old copper pans? Lachlan does.

‘Culinary love’ is a term which comes to mind.

He tells me that his recipes have been handed down by his family, which commenced its confectionary business in Bradford, England in the late 1700s and then continued it in Australia in 1881 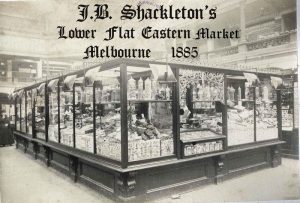 (they lived in Elgin Street, Carlton and their store was in the Eastern Market in the city). He has exercise books filled with those early recipes and they are the backbone of his kitchen, but he welcomes innovation too so his processes are repeated with variations according to fruit and style.

Always, he says, he takes great care with fruit preparation. Cleanliness and appropriate equipment are important factors but, he believes, consistent results are also due to the use of the finest ingredients and vigilance in monitoring pectin levels and temperature during the cooking process. 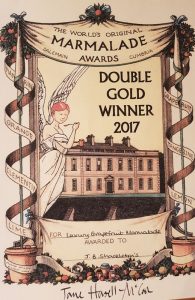 Lachlan’s range of marmalades is extensive and he also makes quince and orange jellies and boysenberry and raspberry jams as well as raspberry vinegar (not to mention his own cheese and bread from their domestic kitchen) and his products have been judged as multiple worldwide winners, reaping medals of all colours at international competitions.

A highlight of Lachlan’s career is his Luxury Thick Set Grapefruit Marmalade with a Hint of Honey, which was judged World’s Number One Traditional Marmalade in 2017 and Australian Food Awards Gold Medal 2016.

As batches are relatively small, perhaps 30 jars at a time, some of those jars lining the kitchen shelves must be as precious as vintage wine. I’m promised a tasting later and look forward to the experience.

So where does Lachlan obtain his ingredients? From a variety of sources but firstly, home grown. On his large, irregular parcel of land there is a collection of carefully tended citrus trees – orange, lime, lemon, grapefruit and blood orange. However, it seems that recently 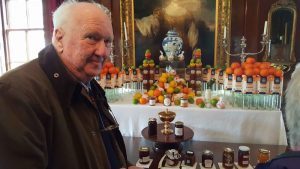 wild deer have discovered his crops and, whilst he says that he “loves the deer“, but is frustrated by their pillages.

There are other sources though – through acquaintances – a neighbour supplies figs and commercial suppliers include fruiterer, Angelo (at Foodworks in East Ivanhoe) for citrus and exotic fruits and a Hoddles Creek grower who specialises in handpicked raspberries, blackberries, loganberries and boysenberries.

Lachlan is a registered beekeeper and has two beehives. His bees feed on roses, lavender, citrus flowers, herbs and Australian bloodwood trees (Corymbia opaca), which are trees known for their medicinal qualities. He tells me that the honey his bees produce is thick and flavoursome and an important taste addition to many of his recipes. I try some and, yes, it is delicious!

As well as fruit and honey, Lachlan’s recipes include a range of flavourings, amongst them ginger from Buderim in Queensland, treacle, vinegars, a variety of spices and even ten year old single malt whisky.

All ingredients are farmed organically so spray free.

And so we’ve visited the kitchen, seen the rows of jars replete with conserves and now it’s time to move on. Where to? Where else but further into this Wonderland. This sub-level was actually intended to house a squash club by a former owner but has now been converted into an office, a library, a dining room and multiple spaces for the storage of a fascinating array of some very beautiful objects, each one a mirror into Lachlan and Julia’s past.

Lachlan’s forebears were travellers and entrepreneurs, amongst them Sir Ernest Shackleton, the British Antarctic explorer who led three British expeditions to Antarctica 1901-1921. His is a family of high achieving adventurers.

He was born in Melbourne and completed his primary and secondary schooling here. In the late 1960s, his father, who was an academic of high standing at RMIT, was appointed to a diplomatic position in the Middle East and the family moved overseas, his parents to Libya and Lachlan to the United Kingdom to complete his tertiary education. He emerged with degrees in Geology and Archaeology and multiple degrees in Law including a Doctorate in International Law from Cambridge. 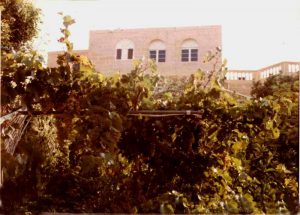 During his university years in the late 1960s, he travelled from England to Libya to visit his parents and en route he discovered the tiny island of Gozo, sister island to Malta. Thus commenced a Mediterranean romance. Besotted by the location, he returned there with his family and, during the next 31 years (commencing 1969), they restored an historic and beautiful 400 year old farmhouse called Casa Leon, planted and maintained large orchards, integrated with the locals and thrived in the island’s sun-filled climate. Swimming, boating and membership of the local village band were favourite pastimes for him and, although a cooking career was far removed from his thoughts in those days, he did learn to cook Maltese style – recipes he still uses today.

Lachlan recorded his experiences in writing (great stories) and art (surprising and amusing sketches notable for their characterisations and size – so tiny they’re painted with the very finest of brushes).

During his time overseas, Lachlan built up a successful career as a consultant in various fields until 2000 when he and Julia decided to return to Melbourne … not to retire, but to re-start the historic Shackleton family’s confectionery and marmalade business.

We’ve been sitting in comfortable lounge chairs chatting, but now it’s time to return to Julia in the kitchen upstairs for the marmalade tasting.

Carefully laid out on a bench (which just happens to overlook a bush green panorama) are a series of eight jars and a set of spoons. These are just some of Lachlan’s range of products. Each jar is opened and I’m treated to tiny samples of marmalades bursting with flavour. I’m feeling rather special to be invited to taste this award winning produce.

The very first jar contains a Christmas Spiced Tangelo marmalade – it’s heavy with flavour and echoes my mum’s Christmas puddings. The last is a Luxury Lime and Honey Marmalade which assails me with its wonderfully tangy lime flavour. In between I try marmalades with ginger (Dragon’s Breath descriptors), with treacle and with spices, blended fruits and single flavours and each conserve is distinctive and delicious, although the Lime and Honey and Spiced Tangelo are, I think, my favourites. There’s a panforte too, an Italian Christmas cake. It’s heavy with fruit and flavour and one of the best I’ve sampled.

Then, having identified those favourites, we sit down to a table of toast (Lachlan’s homemade Maltese style bread), marmalade (my favourite blends) and tea. A tea party to rival anything Alice experienced in her Wonderland! Time is passing (it’s well into the afternoon now – how quickly it’s flown) but I’m closeted in this ‘other’ world, discovering a little about Julia, who is a children’s author (Julia McClelland).

I’m generously loaded with three jars of jam and a slice of panforte, one jar is the renowned World Best Luxury Thick Set Grapefruit Marmalade with a Hint of Honey! I reflect that this is a jar too special to open, but then, can I resist?

Out past the lions and a companion concrete echidna and back to my car, which just happens to be the same as one Lachlan and Julia used to own in England. I promise him a future drive of mine and he pledges me the future opportunity to ‘sit’ in a prized vehicle that he has locked behind garage doors – a car to be admired, not to be driven.

Where to buy Lachlan’s products?

Lachlan’s brand name is J.B. Shackleton’s, and his labels are embellished with his family coat of arms. His products can currently be bought at: Balgownie Estate, Yarra Glen; Bee Sustainable, Brunswick; East Ivanhoe Grocers – Foodworks; Foodworks Wonga Park; Metropolitan Foods, Templestowe; Spring Street Grocers, Spring Street, CBD; The Post Office, Wonga Park; and, for those who travel further, try Fortnum & Mason in London … although we think they might have sold out!

Further, he’s planning to expand his sales network into more delicatessens and wineries and so he would welcome any enquiries – potential stockists are invited to email him at lachlan.fergus@optusnet.com.au for more information.

7 Responses to “Lachlan Shackleton-Fergus, from J.B. Shackleton’s – a fruitful visit”