A well-dried herb should be the same colour as it was in its fresh state. Those supermarket ones that are heat-dried, lose not only their colour but also most of their volatile oils. The best way to dry herbs is to cut the stems in the morning once any morning dew has dried but before watering, as this will be when the herb’s volatile oils will be strongest. Then tie them in bunches, remove any brown, dried leaves and hang them upside down in a warm but shady place to dry out. Once fully dry, strip the stems, fill the jars, screw the lid on, label and you’re done. 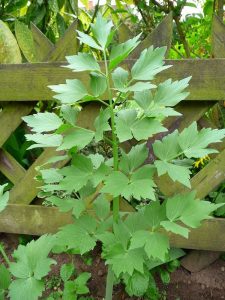 Making your own stock is a sure fire way of avoiding certain ingredients such as MSG, palm oil, wheat, emulsifiers and flavour enhancers, as found in many commercial stock cubes or powders. Simply grow the culinary herb, lovage, in your kitchen garden and you will have a source of fresh herb that tastes just like stock cubes.

Lovage (Levisticum officinale) is a Southern European plant which tastes like celery. It is a tall herbaceous perennial which grows to 1-2 metres through spring, summer and autumn, and then dies down for several months over winter before springing up again with renewed vigour. It prefers shade and a deep, rich, moist soil and plenty of space. Its leaves, seeds and roots can all be used, though the root (which was chewed as a tobacco substitute) is rarely eaten these days. The seeds can be ground into a peppery spice.

In Europe, lovage is often referred to as Maggi as it so closely resembles the taste of the original stock cubes produced by Julius Maggi who founded the Maggi Company in Germany in 1897. The broad, shiny leaves plus the tall, hollow, cylindrical stems are the parts used for stock. Harvest several handfuls of leaves plus stems, simmer them in 2 litres of water for 40 minutes, then boil to reduce the liquid. When cool, set in ice cube trays or add other vegetables such as onions and carrots to produce a more flavoursome stock. You can, of course, add in any herbs such as thyme, oregano, bay leaf, savoury and marjoram to pack the flavour in. And, if you want a salty stock, add salt. To store your stock, an alternative to freezing it is to bottle it in Fowler’s vacola jars.

The stems of lovage, like the stems of its cousin Angelica archangelica, can be candied, and the stems can also be peeled and eaten raw. The leaves too can be eaten raw but have a richer, more robust flavour than celery so need to be used sparingly.

Late summer is a good time to harvest all your lovage before it begins to die down. Turn it into stock for soups, stews and casseroles to last you through the winter.

It may sound odd to plant annual herbs in early April but I have come to the conclusion that it is a good idea. Herbs such as dill, florence fennel, summer savoury, coriander, chervil and German chamomile (the variety used for chamomile tea), all of which are used for their fragrant leaf, bolt during the hot summer months. Climate change has caused a shift in seasons so that once cool March and April are now warm – certainly warm enough to germinate seed – but not too warm to cause bolting to seed. You may not get seed head development but you will get foliage in autumn, winter and spring. Another advantage of autumn sowing of annual herbs is that this is also the time you can collect seed from last year’s plants, giving you fresh seed to sow.

Parsley, while technically a biennial, is usually grown as an annual and can be added to the list. It takes longer than the other herbs to germinate (up to 2 months compared to 10-14 days) but you can speed up the process by soaking the seed for 24 hours. If you are adventurous, you might also plant basil seedlings but, unlike other annuals, basil will succumb to cold weather and be killed off completely by frost. Having said that, my basil lasted into July last year.

Sow seed of all annual herbs directly into your garden so as to avoid setback through transplanting. Cover the seed in some way to prevent birds scratching it out and eating it up. And remember to water well from the time the seed is sown until the plant is well established.

Some herbs don’t dry well and are better preserved in oil. These include basil (though recently someone told me that basil dried in a very slow oven retains its flavour), french tarragon, oregano, savoury and thyme. If preserving in oil, use a hot oil method as the microbes on herbs (or any other vegetable) can cause botulism (which can be fatal).

A number of people have recently asked me how to deal with ants. Tansy is the answer. Tansy is a fern-like herb, growing to about 1 metre, with clusters of flattish yellow button flowers that make good dried flowers. It is a perennial but does best by being cut to ground level late autumn and allowed to shoot from the base. It will be the first plant in the garden to wilt in hot weather, indicating that your garden needs water.

Tansy has quite a history as an insect repellent and a biological pest control. It was used for embalming bodies, placed in coffins and made into wreathes which were placed on dead bodies. The tansy kept insects from attacking the corpses. As a pest control, it is used as a companion plant to roses, to cucumbers (repelling cucumber beetle), and in the USA with potato crops (to deter Colorado potato beetle).

Ants loathe tansy. Crush a tansy leaf and place it across an ant trail and the ants will immediately turn and run away. They will not cross the tansy leaf. Fresh tansy can be placed anywhere where you want to deter ants, or dried and placed in cupboards or drawers. It does have quite a pungent smell so that needs to be taken into account. At the Macleod community garden, where there was a considerable ant problem, tansy is grown behind the compost heaps and keeps them free of ant nests.