Perched high on a ridge above the Diamond Creek, 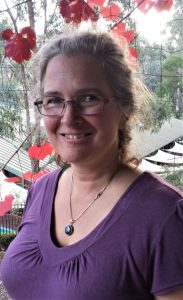 just where it skirts around the north side of Hurstbridge Village, is a rustic brick and weatherboard home fronted by a keyhole garden.

It’s a soft Saturday afternoon – mild, autumnal. The air is tinted a moist misty blue and laced by a trailing tendril of acrid smoke which permeates the air and reminds me of childhood and chestnuts. Together, fire and water create a fine gauze through which the world appears mellow and just a little mysterious.

I’m visiting Lucinda Flynn, to see her garden and to hear her story.

I gaze at the garden and am entranced by its magical blend of levels and plots and winding paths – no regimented borders here, no driveway to mention, just a meandering arrangement of thriving herbs, vegetables, fruiting trees, vines and plants which spill out in blue, lavender, red, pink and green hues. This is a garden where I can imagine fairies dancing in moonlight and wonder whether frogs might nestle beneath the sharp leaved Vietnamese mint in its water garden. I imagine them mirrored by moonlight and waiting for princesses to transform them into charming princes. Anything can happen here.

I’m standing with Lucinda, the garden’s Earth Mother, while her daughters and their dog, Louis Charmstrong, look on. Sean, Lucinda’s husband, will soon arrive after closing their shop in Hurstbridge. The family is well known in the area through their strong support of the Hurstbridge community and their business, Going Green Solutions, which supplies a wide range of innovative recycled and re-useable products. But that’s another story, back to Lucinda and her garden.

When the Lucinda and Sean moved onto the property 15 years ago, the front yard supported a healthy growth of agapanthus, a driveway and not much else. She had just read a book about permaculture which advised that gardeners should observe their land for four seasons before planting out. So that’s what she did – observed the run of water, the prevailing winds and the sun’s path before carefully plotting her patch. 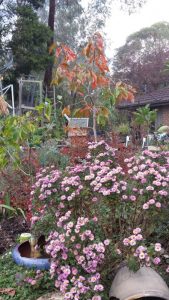 Soil preparation came first. Local Hurstbridge soils are perfect for grey green stands of wiry eucalypts, golden grasses and even tiny orchids, but they are notoriously inhospitable when asked to produce fruit and vegetables. Lucinda tells me that, prior to planting out her eclectic mix of fruit trees; apples, pears, nectarines, a pomegranate, persimmon, citruses and several unnamed varieties, she imported trailer loads of manure, spread blood and bone and added as much mulch, coffee grounds and compost as she could find. The family’s been rewarded by her work – that soil has been converted into a rich organic mix which now supports heavy cropping.

We look at her compost factory and I’m fascinated by her thrift and endeavour – in this household, very little is wasted. One corner of the keyhole is reserved for weed composting and I see two high piles of weeds rotting under tarpaulin covers with one pile already providing rich soil while the other breaks down. There’s also a covered ‘weed bin’ into which the most rampant of weeds are drowned. After seeping for some time, they produce a clear black/brown liquid which is then added to fresh water (to weak tea strength) ready for hand watering. Nearby, there’s a tall black plastic composting bin sealed with a screw top – Lucinda tells me that it’s reserved for kitchen waste, coffee grounds and manure and, when we peer down into its depths, I note its warm sweetness and industrious worms.

Her compost is great and enhances all her garden beds, but it’s clearly not the only ingredient in the soil – bags of coffee grounds, animal manure and mulch, as well as lots of manual labour, are all important additives. 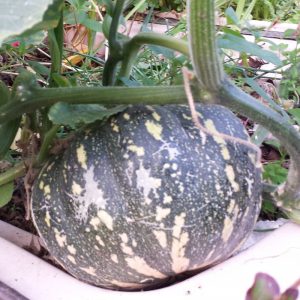 And so we move on to the topsy-turvy garden beds. Lucinda tells me they’ve been organised for purpose as well as companionability – herbs appear near the front door, handy to the kitchen for easy plucking. Plant cuttings are there too, protected from winter’s heavy frosts and summer’s harsh sun by the front portico … trays of them, rows of seed-raised and propagated junior plants lovingly tendered. Some will boost Lucinda’s plots while the excess will be shared with others. I reflect that her garden actually extends well beyond its boundaries. Tropical plants too, exist close to the front door. There, a babaco, a tamarillo and a curry plant are sheltered by the houses’ eves and, with Lucinda’s help (this is her fourth attempt at growing a babaco plant), appear to flourish despite our icy winters. Now I see the babaco shyly supporting two beautiful, elongated fruit behind its huge shining green leaves. 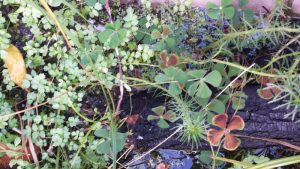 We meander between north facing beds which back onto a westerly fence and I’m surprised to see that, even now, beans, tomatoes and basil survive. Lucinda points out the hardier cottage plants with their autumn burst of colour – lavender, salvias, asters, sea-side daisies, all of which originated as cuttings from her mum, who, she says, although now elderly is still “a great gardener”. We peer into a variety of containers housing a multitude of culinary plants and examine one called nardoo, a pretty native water plant prized for its edible roots. This plant came from Lucinda’s mum, too. 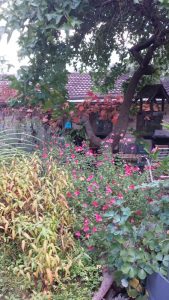 In the middle of the garden stands a mystery tree. It’s not big but possibly quite long-lived – it was there when the family moved in. It has white flowers in spring and is semi-deciduous but now, mid-autumn, it’s still fully clothed. Lucinda tells me no-one knows what it is, though many home gardeners and experts have tried to identify it – it’s left them baffled. Right now the tree provides a welcome canopy which protects the small pond with its Vietnamese mint and rushes and the carpet of violets beneath its spread. It is visited by a host of colourful birds and creates a lovely focus in the space.

Now, it’s close to 5pm and the evening air is drawing in. We’ve explored the front yard and even found time to take in the striking view from the back of the house where the land falls away at an amazingly steep angle. The slope has been fortified with two enormous ‘tyre walls,’ supporting walls strengthened with rows of dug-in car tyres. So much work has gone into building this space.

We all need to escape sometimes, to spend time reinvigorating and renewing, hence our regular ‘breaks’, holidays and trips away. In this verdant garden, I think I’ve seen a place which offers not only a wonderful family food resource but also a place for Lucinda to lose herself, to relax and to renew.

This garden is much more than just a garden, it’s a refuge. 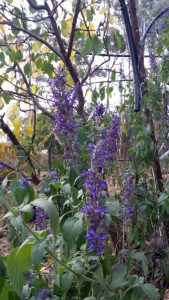 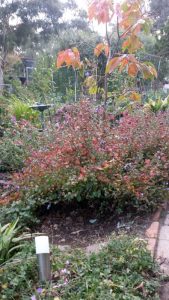 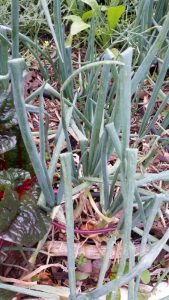 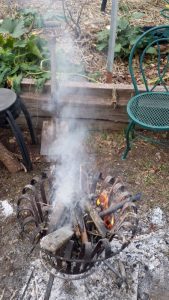