The main species of blueberry is called ‘highbush’, of which there are two types: ‘northern’ (which is deciduous) and ‘southern’ (evergreen). Traditionally, it has been the deciduous northern type that has been planted in Melbourne but Bruce Plain, owner of Bulleen Art & Garden nursery, tells me that, with climate change, the evergreen southern type is becoming increasingly popular. I have roughly equal success (or, more precisely, lack of success!) with both types. If you want to grow the deciduous northern type, Winter is the time to buy it from your local nursery. If, however, you want to grow the evergreen southern type, wait until Spring. All the varieties seem similar to me in terms of both growing habit and taste.

Blueberries are not grown in normal soil! Rather, they require a pH of 4.5-5.5, which is very acidic. To make the soil this acidic, you can add some granulated sulphur and dig it through the according to the instructions on the packet. To keep the soil acidic, mulch with pine needles. There are a number of pine trees along the Yarra, for example at Lenister Farm – simply take some big bags and scoop the needles off the ground. Keep the mulch away from the stem to prevent collar rot. 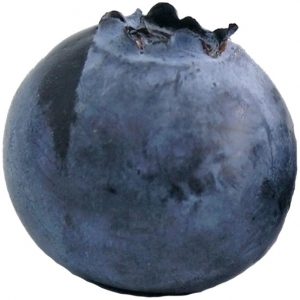 Have you considered growing a hedge of blueberries? These delicious, small berries are so much better tasting straight from the bush, particularly as the store-bought berries are often slightly beyond their best. Hedges produce more berries than a number of plants scattered through the garden and a hedge will crop for up to 50 years.

There are three main types of blueberries: highbush, lowbush (not suitable for growing in Australia) and rabbiteye. Of these, highbush has a further two types – ‘northern’ (which is deciduous) and ‘southern’ (evergreen). Strangely [Editor’s note: only for those living in the Southern hemisphere!], ‘northern’ requires a greater chill factor and is the type commonly grown in the southern states.

To grow a hedge, select several northern highbush plants which will grow to a height of 1.5-2 metres. I recommend a mix of Brigitta (an Australian bred variety) and Northland (a North America bred variety). Or, for a lower hedge of about 1 metre height, choose rabbiteye (so called because the berries have a pinkish tint which supposedly makes them resemble the eye of a rabbit).

For many years, a blueberry farm existed not far from Montsalvat in Eltham which grew Brigitta. Speaking to the owner some years ago, I discovered that we have good conditions for blueberry growing in our area but we do need to check the pH of the soil and adjust where necessary. Blueberries require a pH of 4.5-5.5 which is more acidic than is general in our locale so add some granulated sulphur and dig it through the bed according to the instructions on the packet.

Blueberries require full sun for maximum cropping (they will tolerate partial shade but will produce fewer berries). Because they have shallow roots which need to remain moist, soil should be well drained but full of compost and organic matter to retain moisture. Plant the bushes 1.5 metres apart and, if planting two rows, then these should be around 2.5 metres apart. Prepare a hole twice the width and depth of the plant and add a mix of 2 parts loam to 1 part compost to the bottom of the hole. Hold the plant so that it is not buried deeper than it was in the pot, and backfill with loam. Then, to help maintain soil acidity, mulch with a 5-6cm layer of pine needles or, if that is not available, then woodchip. Keep the mulch away from the stem to prevent collar rot.

Water deeply 2-3 times a week in summer and, if the winter is dry, also water then.

For the first 2 years, rub off all the pretty, white flowers. This seems a shame but it will be worthwhile in the long run as it will result in more vigorous bushes. There is no need to prune in the first 3 years. In the 4th year, prune out weak, damaged, crossed or diseased wood plus woody canes (cut these off at ground level). This will provoke new shoots and increase berry production. Leave the strong, new canes growing from the base, and the new laterals. Pruning should occur after the end of cropping in autumn. You can expect to harvest blueberries from December to April.

[Editor’s note: in The Complete Book of Fruit Growing in Australia, Louis Glowinski recommends using well-rotted chicken manure as the annual fertiliser. His argument is that blueberries don’t like either nitrates or chlorides and that many commercial fertilisers contain such compounds.]