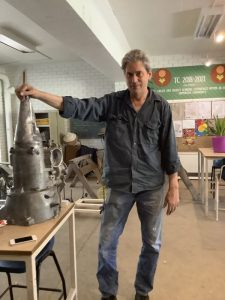 Drew Barr is a permaculture and transition skills educator who specialises in mentoring adolescent boys. He runs the permaculture garden at Templestowe College and has a company called Growing Resilience, dedicated to permaculture education.

When I visited him at on a sunny day early in October, the permaculture garden at Templestowe College was flourishing in the warmth of Spring. Drew told me some of his story.

“I grew up in the 1970s out near Hurstbridge and I had a milking cow, a veggie garden and even a Clydesdale horse. After I went to uni, I took a big diversion into the corporate world and ended up working in superannuation for 20 years. We had a little farm out at St Andrews, my wife and I, and we brought our girls up there. We restored an 1880s farmhouse but we lost the lot on Black Saturday and, you know, the wheels fell off my cart. I just pulled up stumps at work and didn’t know what I was going to do.

“I had been really disillusioned by some of the things that were happening in the political world. In the superannuation field, the Carbon Pollution Reduction Scheme was being introduced by 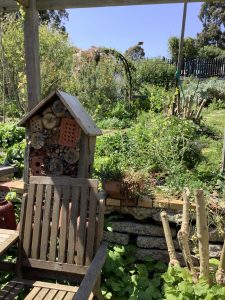 Kevin Rudd and I had been dealing with people on the other side of the argument – the mining lobby – and I didn’t like those people. It was clear to me that we had lost the home we had worked so hard to build through an event caused by climate change and I’d been struggling to get through to these people with zero effect.

“I knew I had to find another way. So I quit. I ended up doing a permaculture course with Virginia Solomon at Eltham College. I then worked there for a while – we had a diploma course, which was fantastic. It would be great to do one here but there’s so much red tape involved and, frankly, I’m over all that.

“We’ve built something quite different here and are just finishing our sixth year. My wife Angie and I were brought in to do it from scratch. It was clear that they wanted a big sustainability focus. We came in with grand plans, started gardening and also started building infrastructure sustainably.

“We were part time at first because the school wasn’t sure how it would all pan out, but eventually the principal we had at that point (Peter Hutton) was happy with what it was doing for the 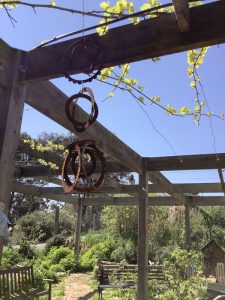 kids and it really has just grown higgeldly piggeldly from there. We’ve been allowed a very free hand.“

Watch Peter Hutton’s Ted Talk entitled ‘What if students controlled their own learning?’

Drew had building experience from growing up with his Dad, from a stint building with mudbricks while at uni and, of course, from the restoration of their St Andrew’s house that he and Angie had carried out.

After telling me the story of how he came to be working at Templestowe College, Drew showed me a standalone solar power system that drives all of the cordless tools as well as the lighting. The system was started by a technology teacher who moved it down to ‘the Sustainability Centre’. Drew is enthusiastic about how many resources the school had to offer when he and Angie started there.

“Templestowe College started off as a tech school in the 70s so I had all this amazing stuff to work with.“ 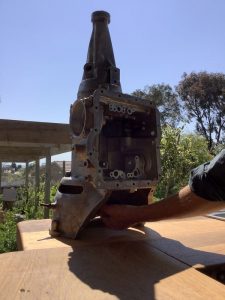 Learning is, of course, the central purpose of the Sustainability Centre and Drew is clearly committed to young people and education.

“They have a Montessori Adolescent Program here where the students undertake self-directed project-based learning. That approach to education works really well with permaculture so there is lots of synchronicity going on.

“The school found that the garden program was a good way of keeping disengaged students interested, and two groups emerged: the Permaculture group and a subject called Backyard Studies.“ 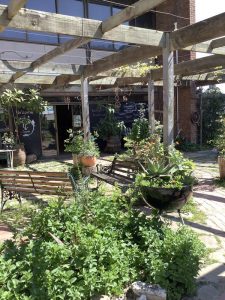 In Backyard Studies, the students learn not only about working a productive garden but also how to work in teams and use tools safely.

The students have built a beautiful European cypress pergola at the entrance to the classroom and, through the construction process, have learned about the importance of accurate measurement. Drew believes that, along with maths, one of the most important skills the students learn is to re-imagine junk.

“With climate change and peak oil, the world is going to be full of this stuff with nothing to do. If the kids can re-imagine stranded assets in a completely new environment for a completely new purpose then they can turn a worthless piece of junk into something creative.“

A great example of this creativity is the use of old plastic school chairs to grow pumpkins in embedded in the earth on a north-facing slope. They have installed an irrigation system and Drew believes that they can achieve a yield of half a tonne. 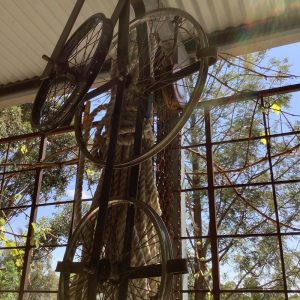 There is a garden arch made of star pickets, reomesh and old cake racks, as well as a beautiful mobile made out of clutch discs, and even a little library made out of an old heating oil tank, still waiting to get its shelves.

Drew showed me a pulley that the students made out of bicycle wheels and rope.

“My view is that the more you can take a common item and put it a new context, the more it stimulates the imagination. Ten kids can move a half-tonne log with that. “

The gardens are extensive and productive with much of the area sheet mulched. There are bananas, babaco, sugarcane, arrowroot, avocados, passionfruit and feijoas growing against a north facing brick wall to make use of the heat that these plants need. I also saw asparagus, quinces, tamarillos, raspberries, snow peas and many other food crops. Drew pointed to problems with leaf curl in the peach trees but noted that the apricots had been fantastic. A good reason to have a variety of fruits and 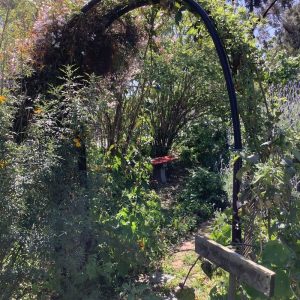 veggies growing is that, if something fails, there is still good eating to be had from the successful plants.

As far as pests go, ducks wander around eating snails when they are not actively contributing to the ‘duckponics’ system (which grows nice lettuce) and the students next term will be asked to come up with a natural energy powered scaring device to take care of the cockies.

As part of the evolution of the program, some former students now work part time in the garden.

The garden at Templestowe College inspires hope. The young people that I saw working there, along with all the others mentored by Drew and Angie, may be those among us who are best suited to the changing environment in which we live. Perhaps they will be the ‘variations’ to our species who start our society on its transition to a better, more advanced version of itself. 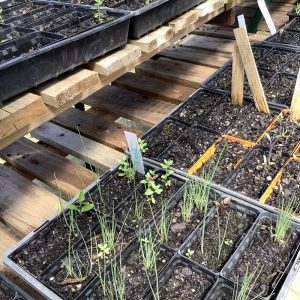 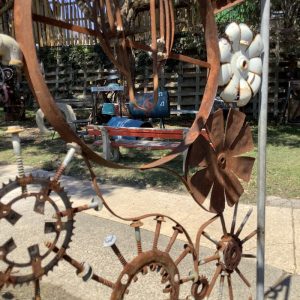 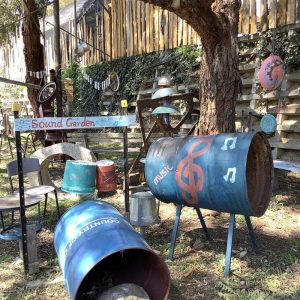