Ann Stanley visits the garden of Claire Smith, from Mooroolbark.

Two permies and friends from Mooroolbark

People of Mooroolbark! You have inspiring people among you. Of course, you already know this(!) but you may not know these two people: Claire Smith and Jenny Husselbee have both established productive permaculture gardens on challenging sites in Mooroolbark, Claire on boggy land not far from where Lilydale Toppings were sourced and Jenny on clay soil near the site of the Montrose brickworks. Neither garden is on prime agricultural land but both sites produce significant amounts of food, proving that, with some attention to your site’s deficits and working with the natural supplies of light, water and soil, a garden can be productive. Both gardens showcase the permaculture approach to food growing, which is based on the integration of plant, animal and community resources.

I met Jenny and Claire at Claire’s home on a sunny morning in spring. We began our discussion about food growing and permaculture, free ranging around the topics of community, animals, produce, pests, permaculture principles, water and soil. We took a tour of Claire’s permaculture garden, then we drove to Jenny’s place, where we continued our conversation while strolling in the grounds of her 4½ acre block.

This article is about Claire’s garden. Here is the link to the article about Jenny’s garden. 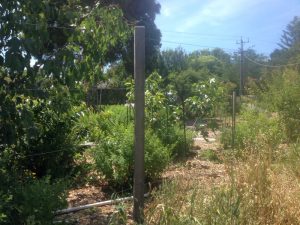 Claire completed her Permaculture Design Certificate (PDC) with David Arnold in Violet Town about 5 years ago and since then she has maintained her 20 or so year old passion for the permaculture philosophy of sharing, keeping food production local and building community resilience.

Starting from scratch at the house she bought 6 years ago, Claire has aimed to provide as much of her own food and power as possible. At first there were just two liquidambar trees and some roses growing in a garden situated in a boggy area a few metres from a retarding basin. There was no soil life, until around 18 months afterwards. Claire had the liquidambars cut down, dug a huge trench to trap and slow the water, and put the liquidambar timber in the trench as a form of hugelkulture. She used coffee grounds supplied by McDonalds to build up the soil. ( 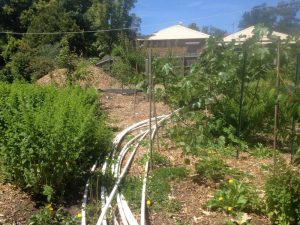 McDonalds no longer offers this service but see this list of local coffee sellers who do.) Coffee grounds are a sustainable source of organic material for gardens but, take note, according to Sustainable Gardening Australia:

“ … research suggests that, when fresh, uncomposted coffee is added to gardens at volume application rates of 2$frac12;% and higher, it will likely decrease all plant growth and development. As such, it is probably a better idea to add coffee grounds to your compost to allow for decomposition of toxic components, and for the improved water holding capacity benefits to emerge. It is recommended that no more than 20% volume of spent coffee grounds be added to your compost.“ 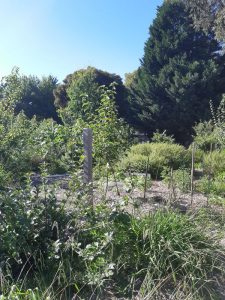 Claire did not, of course, solely rely on coffee grounds, but also built up her soil with rabbit manure, straw and autumn leaves gathered from the streets of Surrey Hills in autumn. There is about two centimetres of soil now but there are places that are still so boggy that yabby-like creatures live there. Nevertheless, she has eight varieties of cherries, three types of apricot, six types of apples as well as nashi pears, plums, quince, pears, peaches, nectarines, macadamia and other fruits, and is having reasonable yields after the second year of the trees being taken from their pots and planted in the ground. This impressive orchard is visible from the street as Claire has deliberately cultivated her frontyard as a model for passers-by to see what is possible on a suburban block.

Also in the front garden are raspberries, josta berries, every colour of currant, and heritage tomatoes. There are zucchini and three varieties of garlic. There are plants bought at half price from Bunnings in pots and yet more potted plants sourced from swaps ready to go into the ground. Along the front and southern front fence of the house are espaliered apples, plums, quince and pears and a fejoia hedge. Claire also grows nardoo, which is a native water plant, in a bathtub pond. There is clover and dandelion growing for bee 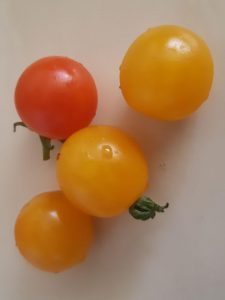 As well as bees, Claire’s place sustains chickens, frogs and numerous other creatures. Some of Claire’s chickens have been rescued from elsewhere and her flock is made up of Barnevelders, Cochins, and crosses of the Speckled Sussex, Araucana, Cochin, commercial layers and Welsummer breeds. Frogs have taken up residence in a children’s wading pool that has gathered rainwater. Some less-welcome residents are cherry and pear slugs (aka sawfly larvae), which she picks off manually. To harvest water, there is a tank capacity of 72,000 litres and Claire runs a washing machine and two toilets from that. To manage the excess water on her boggy land, she has some swales which are there to try to manage the runoff but still the chicken shed and run flood with the excess water sometimes. She has a 3kW solar panel system with 12 panels.

Claire is a member of the Outer Eastern Permaculture Swap Group and the Permaculture Victoria Bee Group. She trades her produce at the local food swap, the Mooroolbark Urban Harvest Swap, a backyard food 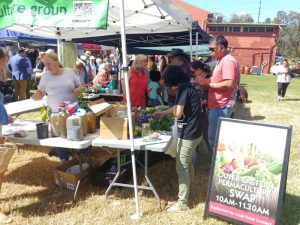 growing group which she initiated in 2016 that swaps produce, seeds, plants and homemade items such as preserves. Claire acknowledges the assistance of the local council in this enterprise and says, “often there are council obstacles to these projects but I got the right person on the phone who was a permaculture enthusiast, and knew what grants were available.” The Mooroolbark Urban Harvest swap has now been going for 4 years and often gets up to 30 people visiting (and even 50 when they have a guest speaker). There are always a few new faces there.

Claire also coordinates the local Buy Nothing Group’s community pantry from her house, collecting supermarket surplus fruit and vegetables from a range of sources such as a local church, dumpster divers, Bakers Delight and Nandos.

With the amount of work required on her half acre property ,Claire sometimes needs to employ helpers. She chooses permaculture people when she needs tradespeople and she has also had some help from Argentinian backpackers who were stuck in Melbourne and needed some work. Claire’s involvement with the community has been rewarded and she is often able to have a mini ‘permablitz’. The New Community Ringwood church helped her plant 40 fruit trees in two hours resulting in the aforementioned impressive orchard.

2 Responses to “Claire Smith – a permie from Mooroolbark”