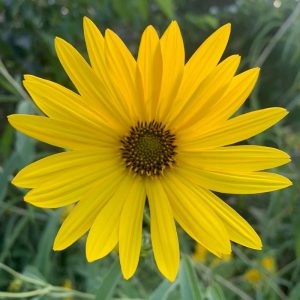 For March, I have chosen perennial sunflowers (Helianthus angustifolius), also known as American sunflowers as they are native to the USA.

Whilst they are not edible, they are a great addition to food gardens, both for their flower displays and as a bee attractor.

The flowers appear in late summer to autumn and therefore prolong a garden’s period of flowering. They look good in borders, pollinator gardens, cottage gardens or swamps. Whilst they grow best in wet or boggy areas, they will also grow in normal soils as long as there is some moisture though summer. They can get up to 3 metres tall and are quite the show!

A true perennial, they should be cut down after flowering and will then re-shoot late spring. 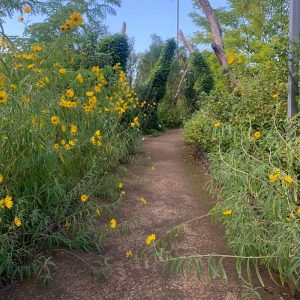 good for attracting pollinators in the garden, which is particularly useful as a lot of other flowers will have finished of the season. At the food forest, we aim to have something flowering at all times throughout the year and the perennial sunflowers help us to achieve this.