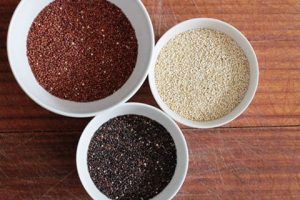 For us Melbournians, cooking and linguistics go hand in hand. No more so than with our Bolivian friend, quinoa.

What’s that? Kinowa? Kwinowa? Queen Noah? I’ve heard them all!

Try something a little more like “keen-wah”. That’s it. Now you’ve got it.

If you’re the kind that dines out (even occasionally) you’ve probably come up against this one before. Even still, it is a relative newcomer to our cooking culture. But it is far from a new food.

If you don’t know the story of quinoa, here it is in a nutshell. The story starts in the mountains of Peru and Bolivia, during the time of the Incas. They called it “Mother of all Grains”, which is technically incorrect but poetically justified. It is not actually a grain but a seed, from a plant more closely related to beets and spinach. That little spiral that you can see when it’s cooked? That’s the germ.

So the Incas understandably loved this stuff. It grew in large quantities and in harsh conditions. It was to them like rice is to … well, everybody these days.

Where a few years ago quinoa was pretty much unheard of, today it’s in just about every supermarket. You can barely open a modern cookbook without finding a quinoa salad. We’ve all gone quinoa crazy.

Well as far as food as fuel goes, it’s pretty much the best. And it comes in different colours!

Our bodies can’t produce everything they need to survive. The things that we can only get from foods are known as ‘essential’. Quinoa, the health food champion that it is, has all essential amino acids, making it a whole protein. This makes it a great protein alternative or addition to meat, and is why it’s a favourite for vegetarians.

It’s also a good source of soluble fibre! This is great for a number of reasons. It has potential to help lower cholesterol, control blood sugar, control appetite and regulate digestion. These effects have flow-on results in your body that can lower your risk of diabetes, and help with weight management.

But better than all that, it is a very nutritious food. Manganese, magnesium, iron, potassium, calcium, zinc, copper and selenium are all very well represented, along with vitamins B1, B2, B3, B6, B9 and E. You can also get some of your Omega 3 fatty acids from quinoa, along with a good dose of antioxidants.

No wonder it’s a supercrop! That’s not even an exaggeration. The Food and Agricultural Organisation of the United Nations says so. They even named 2013 the International Year of Quinoa.

Most supermarket-brand quinoa will come pre-washed, but if you’re sourcing your own or buying in bulk washing is an important step. Quinoa naturally comes with a coating of saponins that protect it during growth but give it an unpleasant bitter taste. Simply use cold water and a strainer as you would beans.

On the topic of beans, quinoa also contains a degree of phytic acid. As you know from last week’s article on activating beans, this can reduce your body’s absorption of nutrients. Similarly soaking quinoa will reduce the amount of phytic acid, and boost your quinoa’s nutritional value!

So go ahead. Have a play with it.