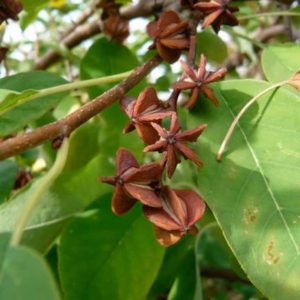 [Editor: Chinese star anise is a spice is used in Indian, Chinese and other Asian cuisines. It is also used in the French recipe of mulled wine and in the liqueur Galliano. It contains anethole, the same compound that gives the unrelated anise its flavour, and can be used as a less expensive substitute for anise in baking. Star anise oil is a highly fragrant oil used in some perfumery, soaps, toothpastes, mouthwashes and skin creams.]

In our hunt for unusual plants, we found a Chinese star anise plant and have been looking after it in the nursery over winter. Now (in late August), it’s time to find a spot in the garden as we move into Spring. It is a frost tender, sub-tropical plant, so we will probably put it into temperate rainforest section of our edible forest, where it will get more water and will be more sheltered from both the wind and the full afternoon sun.

The tree can get up to 6 metres high and 3 meters wide in optimal conditions. It can also be hedged back to form a scented hedge.