Ann Stanley visits the garden of Olwyn Smiley, from Heathmont. As The Backyard Vegetable, Olwyn helps people to establish their own veggie patches. 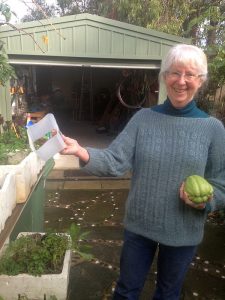 Olwyn has had a garden since she was five years old. Having a father from a farming background and a mother from a family of commercial flower growers, she has, she says, a genetic disposition to gardening. Her first garden was on Koolan Island, which is off the Kimberley coast of Western Australia. There she grew mainly cactus and other succulents, plants that a child could manage on a rocky island with little top soil and no permanent water supply. The water came by barge from the mainland! Despite these conditions, Olwyn’s parents grew watermelons and sweet potatoes using grey water diverted from the washing machine. Later, in Port Moresby, the family grew tomatoes and peanuts in their garden.

Since then Olwyn has always had her hands in the dirt, even if her accommodation allowed only a window sill garden. She started her current garden in Heathmont 28 years ago. At first it had some “diseased plants and bird poo trees” but now it has around 30 fruit trees, thriving vegetable beds, vines and chooks. There is a potting area, a grey water system and winding paths. Both the back and front yards are heavily cultivated, as is the land beyond the property’s boundaries between the bike path and train tracks (this is with Council approval!). It is Olwyn’s ‘zone 5’ (for those who speak permaculture), and she and her husband, Lloyd, have planted indigenous plants there. 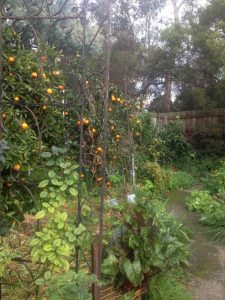 In 2013, Olwyn, needing work that fitted in with the advocacy role that had come with caring for elderly relatives, decided to see if her ‘obsession’ with gardening could become an income-earner. She realised that many people crave a connection with the soil, wanting to garden but not having the benefit of having learnt from the previous generation. She thinks that probably there are now two generations in which the majority of people have grown up in households without the chooks and backyard veggie patch that was typical of Australian homes in the first half of the twentieth century. So she has offered her services as a gardening coach and consultant, as well as running classes in libraries and community centres. She has met “lovely, wonderful people” through her business, which also includes making gift packages built around plants grown in her backyard nursery.

Recently she has been involved in the development of the Bedford Park Community Garden, for which Maroondah Council approval was gained in April 2018 following the gentle but persistent pressure of Robin Hallett, who has since moved to Ballarat. Robin’s legacy, and that of his sister Jess Ness, is the beginning of a sustainability hub in the Central Ringwood Community Centre adjacent to the new garden. 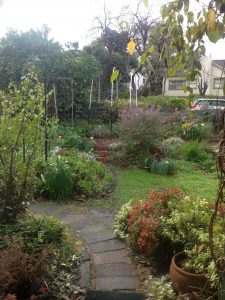 On the subject of sustainability, Olwyn says that her connection with her garden has given her a greater awareness of both seasonal changes and more long-term changes in climate that are causing, for example, anomalous frosts and changes in the types of insects that come.

It turns out that insects are one of Olwyn’s great interests. As an enthusiastic amateur entomologist she has observed with delight how the appearance of a hoverfly larva, as well as lacewings and parasitic wasps, put an end to the aphids on her roses. Passionate about all kinds of diversity, she pays close attention to the movements and behaviour of all the insect populations that have taken up residence at her place. The garden hosts blue-banded bees and the chequered cuckoo bees that lay their eggs in the holes made by the blue-banded bees. The Facebook group Amateur Entomology Australia, made up of “insect nerds and talented photographers“, has taught Olwyn about the various species of insect she comes across. To attract beneficial insect predators, she aims to have something in flower at all times of the year to feed them. She has observed, as I have, that blue-banded bees love salvias. 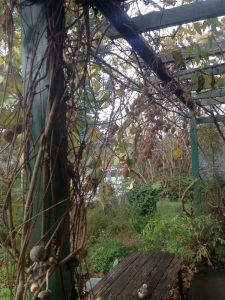 When I ask her what she loves best about gardening, Olwyn says that it’s making a whole meal from food that her garden has produced and “getting to know the insects“.

As well as the maintenance of insect communities, the production of nutrient-rich soil is a continuous process in any fertile garden. And, of course, this is one of the many jobs at which poultry excel. As well as having permanent ‘digs’ in a large chook house, the chickens in this garden enjoy a few months at a time in their temporary accommodation, a simple lightweight shelter made of wire and plumbing pipe that is exactly the same size as the veggie beds. This allows the chickens to be moved around strategically, feeding on the spent plants while fertilising the soil for the next planting. Olwyn also relies on continuous mulching with straw bales and spreading the litter from the bottom of the permanent chook house, both of which help to build up the soil over time. Nothing is wasted and kitchen scraps are buried directly into the garden for the earthworms, bacteria and fungi to do their work. So millions of ‘hands’ are at work here, contributing to the bounty! 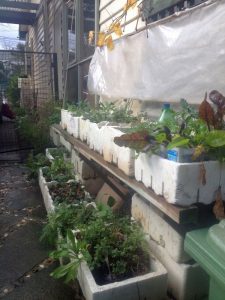 Olwyn’s self-reliance is evident everywhere, from her hand-built wicking beds to the structures on which the beans grow. She attributes this skill and confidence to a father who believed in teaching building skills to his daughters.

For those interested in Retrosuburbia, it is interesting to consider what Olwyn’s place in Heathmont represents. It is the size of a typical suburban block. The house is the right size for her husband and herself, leaving plenty of room to grow food. There is a bike track running behind the property allowing her husband to cycle safely, and there is easy access to the shops and train station. Olwyn says that they have no plans to move anywhere else and it easy to see why. I’m sure a person willing to do the work would be able to show exactly what contribution each aspect makes to reducing Olwyn and Lloyd’s non-renewable energy use as a whole, compared to the average. Anyone willing to take on this audit (we could publish it on the website) should also note that the house has solar panels and had, up until last week (when it died), an evacuated tube hot solar water system. Finally Olwyn’s kitchen is well-stocked with about a year’s worth of tomato sauce in jars. The tomatoes come from a grower in Silvan, Victorian Strawberry Fields, so leave a much smaller carbon footprint than those that come further away in Australia (or from Italy).

My visit to Olwyn’s home has confirmed my belief that a lifestyle built around a garden promotes health, happiness and creativity. If you want, you can investigate the science of this by searching for “6 unexpected health benefits of gardening“. Or you can just trust Olwyn’s long life experience when she says, “Gardening is good for us, physically, emotionally and spiritually.“

As an addendum to this write-up, I thought I would add these two lists, just because Olwyn and I discussed them. They are annual lists published the American Environmental Working Group (EWG) into the levels of potential toxins in foods that are consumed in the USA.

For a discussion of the relevance or otherwise to Australian produce, read this article and then do your own research!

One Response to “Olwyn Smiley’s Garden”