Autumn is a time to harvest, to prepare, to plant and to take pleasure in life’s cycle. It’s a tranquil season marked by clear blue skies and warm gentle days, of branches laden with fruit, vibrant displays of glowing foliage and emerging winter crops. But this autumn, 2020, is different. We are faced with a threat unlike any seen in our lifetimes, a pandemic which is forcing us to re-think our day-to-day existence. Soft, sunny days have been marred by the horror of the COVID-19 virus and We’re contemplating enforced isolation.

Now, more than ever, is a time for self-sufficiency.

Early March and the ever-present news of the pandemic fills the airways but today is a gorgeous day and I’m pleased to be making one last garden visit before Stage 2 COVID-19 restrictions set in. I’m driving down Wetherby Road, Doncaster, returning to a site that I visited just a few weeks earlier (the Kevin Heinze GROW Centre), but my purpose this time is to learn about what sits behind that facility; a community garden which is something of a mystery.

Doncaster Community Gardens occupies a large tract of Ausnet Services land near power lines at the back of the Kevin Heinze GROW Centre. The land is leased by Manningham Council and it’s huge, comprising 2½ acres of land divided into many rows of connected plots. I’ve found no information about it on the Internet but I’ve heard it’s been there for over 30 years, that it has a managing committee, and that it’s tended by an eclectic mix of gardeners of Greek, Italian, Asian and Australian backgrounds. I’m curious to discover more and, as chance would have it, I’ve learned that a family acquaintance, Mario Mastrangelo, has worked a plot there for the last two years. He has generously agreed to host my visit.

Access to the gardens is via a rough private road which runs downwards through the car park between the Kevin Heinze GROW Centre and its commercial nursery. At the bottom of the slope is a T intersection, turn right and you’re driving north-east up through the community garden towards the top of Doncaster Hill. 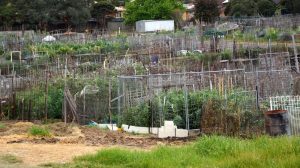 On the left, 23 rows of plots run south-westward. Each row comprises three large plots (10 metres by 4 metres) plus one smaller one. Grassy paths separate the rows. Each plot has its own access point with a lockable gate and most have high wire fences which double as supporting frames for a variety of climbing vegetables. To walk through them is to negotiate a maze.

To the right of the road the layout is mirrored by 10 rows running north-eastward starting at the top of the hill. Each row comprises 5 large plots (10 metres by 4 metres) separated again by paths.

I wonder how I’ll find Mario in this enormous garden. 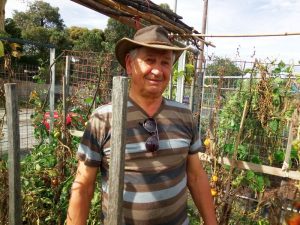 It’s easier to find him than I expected – as soon as I park my car he appears from a leafy walkway; robust, swarthy and smiling broadly. He wears a wide-brimmed Akubra hat; practical sun protection which also seems to be a concession to his adopted country. Mario is Italian, he was born in Basilicata, a region which adjoins Italy’s southern-most mainland province of Calabria. As a young man, he decided to join his uncles in Australia to see what this country had to offer and he arrived here in the mid 1960s with little knowledge of gardening. In his charmingly accented English, he says of that time that he at once “loved Australia“, especially its work opportunities “nice girls“.

Today, Mario is known as an expert producer of edible fare.

I have heard that Mario’s larder of self-grown fresh fruit and vegetables is plentiful and varied. Where did he learnt his gardening tricks? 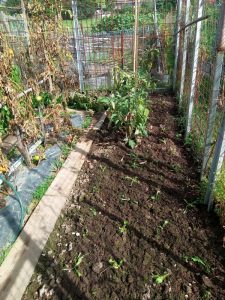 “One day after another“, he says with a smile. He started to grow vegetables in his backyard in the ’60s and, with advice from his mother back in Italy (he’s proud of her sausage making skills) plus the shared knowledge of friends in Australia, he honed his skills.

Mario’s is a life lived simply and well based on his flair for self-sufficiency.

We check out the plots. I’m walking between the high wire fences which enclose each garden and am fascinated by the wide variety of crops I see, even though many of the gardeners here have harvested the major part of their summer bounty. Tomatoes, beans, lettuces and cucurbits (cucumbers, pumpkins, zucchinis and gourds) must have all been popular, but there are also flowers, herbs and some more unusual plants like very decorative artichokes. There’s a tall flowering amaranth growing high in one plot and a mass of drying, head-high asparagus ferns in another. Wire netting is entwined by dried pumpkin and spent runner bean stems and gourds hang down like mischievous Chinese lanterns … I suspect, they’re awaiting Halloween.

In our wanderings, we encounter a younger Chinese couple tending their plot on the north-eastern side of the road. They’re are very welcoming. I ask them about their garden and they’re keen to discuss their techniques, successes and failures. They point out the Asian vegetables that they are growing: furry cucumbers and Hong Kong greens. Then, they take us to another plot to see some beautiful taro plants and healthy overhead vines growing huge winter melons and long, spiked bitter melons. This couple are proud of their garden, but I sense that the cultural mix and friendly interchanges of the gardeners is important too. There’s a real feeling of camaraderie here. We leave with a gift: four green capsicums.

We return to Mario’s Italian style plot to see what he’s producing. Of course, tomatoes are high on his list and several plants stand tall although rather denuded, save a few remaining fruit. He tells me, with some disappointment, that if I had been there “three weeks earlier, the tomatoes were beautiful“. I’m sure they were, especially having seen some of his photos of tall plants loaded with large fruit. But I’m not disappointed, his Borlotti and green beans, eggplants, capsicums, cucumbers and 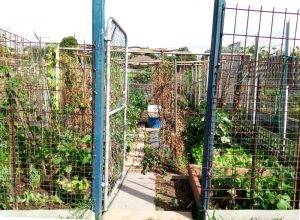 lettuces are all still growing well.

Mario’s plot is divided into two sides with a path down the centre. Bamboo is used extensively to construct frames for tall growing vegetables and to support a shade cloth cover which protects the plants during the hottest months. He’s recently prepared a large bed on the high side of the plot and planted it with endives, cicoria (chicory) and radicchio (bitter red lettuce); apparently all fast growers in the colder months.

He points out his plant placement; watering, the sun’s movements and the fall of the land are all considered, as are low and tall growing crops and thirsty and hardy plants. I ask about the soil which, he says, is naturally fertile but also enriched with compost and 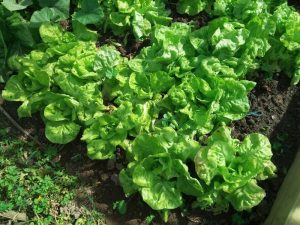 horse manure sourced from Manningham Council. Two visits a week to ‘the block’ are time enough, he says, to maintain this verdant garden.

I wonder how all of these plots receive their water supply.

It seems that, as part of the $90 rental each gardener pays annually per plot (some have more than one plot), they have access to town water, wheelbarrows, hoses and lawn mowers. It is the plot owner’s responsibility to keep the paths that border their plot maintained and failure to do so can result in the loss of the plot. It strikes me that a one-off joining fee of $50 plus $90 per annum is very reasonable for such a productive pastime. And the plots are at a premium – there’s a current waiting list of nine hopeful gardeners. 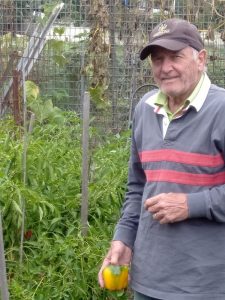 While we chat a car pulls up.

Trevor Eddy is the Doncaster Community Gardens Committee Secretary/Treasurer. He has two plots in the garden (one next to Mario’s) and he has taken on the additional committee responsibilities of liaising with Manningham Council, communicating with around 70 gardeners, managing the allocation of plots, ensuring water supplies, housing communal equipment, monitoring the individual gardeners’ maintenance of common ground, arranging insurance, liaising with Consumer Affairs and reporting to the committee at regular meetings. He’s a busy man.

Trevor and his wife have arrived to collect silverbeet from their garden and he’s interested to see me, a visitor, standing with Mario. He stops to chat and I learn that his initial entry into the garden 10 years before came about because of his ability to use Microsoft Excel! Although plots only become available when gardeners leave, he was lucky enough to be able to trade his IT expertise and management skills for early acceptance into the garden. 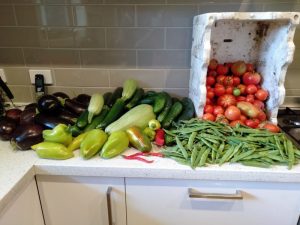 Trevor’s role requires him to communicate with gardeners of mixed cultural backgrounds, sometimes a challenging task but one which he seems to have in hand… “I have, in fact, just put COVID-19 signs up at the block in four languages“, he says.

He seems to exude the same passion for this place as Mario and the Chinese couple. Trevor’s contribution to the collective ‘block’ must be appreciated by its community.

Time has passed so quickly this morning.

The sky has cleared, the sun is now high and it’s time for me to leave. It’s also time for Mario to store his few basic hands tools, lock up and return home. 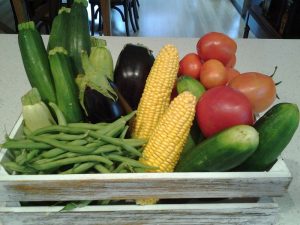 I come away grateful to him for his guided tour of the community gardens and impressed by the industry and enterprise displayed here.

Now, it’s less of a mystery.

‘The block’ offers a healthy and productive outlet to many gardeners and presents a model which more councils could potentially adopt to utilise vacant land, encourage community ties, promote larder independence and inspire us all to focus on sustainable living.

One Response to “Doncaster Community Gardens – ‘up at the block’”