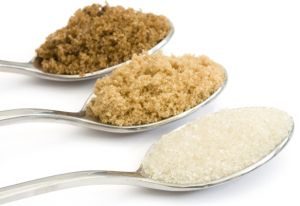 In Australia, just about all our sugar comes from sugar cane (the alternative being sugar beets), and in terms of their impact on the body there is very little difference.

We’ll begin with white sugar, which is almost pure sucrose at over 99.9%. What’s sucrose? It’s a combination of glucose and fructose. Your body uses glucose in the blood to fuel your cells. And fructose? Well… your body is less equipped to deal with fructose. A lot of it gets stored in your body as fuel. And what is stored fuel? Fat. It’s fat.

While that is important to understand, it’s not necessarily to be feared. Sugar is found in lots of otherwise healthy places, like apples and bananas. But what fruit and other natural foods have going for them is a truck-load of other minerals and nutrients.

So while white sugar is one of the purest edibles around, it is 100% NOT minerals and nutrients. It’s hardly even food.

Brown sugar may seem like a better option at face value, but in the world of facts and figures that assumption doesn’t hold up. Part of the refining process of sugar is to remove as much molasses from it as possible. It would seem, then, the logical way to make brown sugar is to simply under-process white sugar. You know, leave some of the molasses in it. Instead, brown sugar goes through a period of time where it becomes white sugar. They refine it to the same point, and then add back some molasses.

Raw sugar does contain some trace amounts of minerals and nutrients, but when we say trace amounts, they are not even worth considering as part of your diet. In fact, from a nutritional standpoint, all of these sugars could probably just be considered as one. The major difference between white sugar and brown sugar is due the water content in molasses, which makes the sugars behave slightly differently when cooking with them. But the major difference between both those sugars and raw sugar is the process. Raw sugar is refined using a non-chemical process and has a lower energy and environmental cost.

It also has its own flavour.

But once they make it to your stomach, they’re all the same.

Sugar is sugar. Moderation is the key.