Therese Scales is a horticulturalist at Nillumbik Nursery in Diamond Creek.

The first part of this article focuses on pruning in the first few 4 years (formative pruning), whilst the second part focuses on the pruning of mature trees. 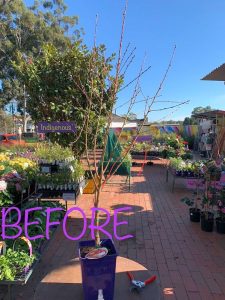 Why prune fruit trees? Shouldn’t we just let them grow to their natural form?

As simple as that sounds, it is not the way you get the best results from a fruit tree.

These rules generally apply to stone fruit, apples and pears:

Do I really have to drop all fruit for 4 years?

In an ideal world … yes. It will encourage strong healthy branches and payoff in the long run.

If you just can’t wait… If you absolutely need to see some fruit from your labour… If you smile and nod when you’re told it all needs to go (only to get home and secretly enjoy your first fruit)… Significant fruit thinning is the bare minimum to allow for ongoing success.

Can you prune to contain the size?

Yes, but it isn’t a matter of doing it once and then you’re done. Rather, it will need to be done at least annually.

When the framework branches have been established (about 4 years), you can start pruning for the production of healthy fruit.

The first thing is to remove anything that is:

What is the difference between a spur and a sprig? 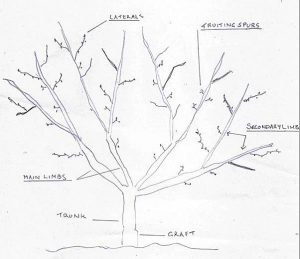 Fruit trees have either sprigs or spurs. Both carry the fruiting buds and form off lateral branches. Each lateral branch may have several spurs or sprigs.

A spur is thicker and longer. The fruiting buds that form along it will typically be larger and further apart.

Sprigs are thinner than spurs and clustered together. The fruiting buds along it tend to be smaller and closer together. Because sprigs are finer than spurs, keeping them shorter and close to the main limbs will help prevent them drooping and breaking.

Therese on pruning of fruit trees