In a Sustainable Macleod newsletter Robin Gale-Baker ruminated about whether the recent warm weather means that we should be deferring our garlic planting. She and I have subsequently debated the subject in more detail. It is a tricky issue, with no clear answer. The salient facts are:

If you plant too early (i.e. when it is too warm), a risk is apparently that the resulting bulbs don’t divide into separate cloves. If you plant too late, a risk is apparently smaller bulbs (because, per day length, the garlic starts trying to form bulbs when it is too young). One potential way around this dilemma is to keep the garlic in the fridge for 30-40 days before planting. I am going to try all the possible options and will report back in due course.

I decided to run a controlled experiment. Rows of garlic were planted two weeks apart over an 8-week period from mid April to mid June. In addition, some garlic was kept in the fridge for 40 days from mid April and then planted. All the plants died back at the same time (second half of November) and were harvested on 24th November. The key results were:

The conclusion: continue to plant your garlic in April or May even if the weather is warm. If you forget, try putting your garlic into the fridge for a bit before planting. 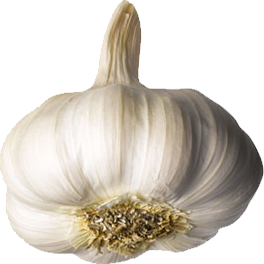 With wintery weather underway, it can be difficult to find something cold hardy to plant in the veggie patch. But garlic loves the cold weather. In fact the more it receives, the better, as the cold is essential for large bulb formation.

Garlic can be planted in Melbourne from early April to late June. Surprisingly it’s a perennial, but usually grown as an annual and harvested from late November into December.

The downside of growing garlic is it takes up space in the veggie patch for around six to seven months. However its advantages include being relatively free from pests and (as long as it’s kept well-weeded and receives reasonable rainfall) pretty much fuss free. Of course it tastes great!

There are many varieties, categorised as ‘hardneck’ (firmer tuft above the garlic bulb) or ‘softneck’ (softer tuft, milder flavour, longer storage). We have found the hardneck varieties easier to grow and less prone to rot, but suggest you try both.

To obtain garlic for planting, purchase garlic bulbs from reputable suppliers who haven’t treated the garlic with growth retardants and chemicals. Farmers’ markets offer good choice and supply and you can check with the farmer directly on these aspects. Alternatively, garlic can be purchased in punnets, giving you the advantage of having someone else start the growing process for you.

If you have purchased bulbs, separate the bulb into individual cloves. Only plant the large, outside cloves – keep the small ones for eating. Large cloves produce large garlic – don’t waste your time with the small ones.

Plant cloves pointy end up, just under the soil. Mulch with a 3cm layer of straw or equivalent – make sure the straw is loose, so the green garlic tops can push their way through when growing. Plant in the sunniest spot you have.

Garlic is generally a ‘pest free’ crop. However, if you grow a large amount, watch out for the cockatoos in the early stages, who can destructively rip them out of the ground. If this is a problem, place a net over the garlic for the first few months.

Keep weed free!! This usually means weeding two to three times over the growing period. If grown in good soil at initial planting, extra fertilisation is not usually necessary; however, if the green tops of the garlic start to look yellow, fertilise with a liquid fertiliser.

Generally it rains sufficiently over winter to eliminate any need for watering; however, if the ground gets dry, then water.

Garlic is usually ready to harvest around end of November to early December. When the green tops have died back by about one third, feel the garlic under the soil to check if distinct bulbs have formed – if so, it’s ready. Don’t wait until the tops have completely died back, or the garlic can often rot. It is easiest to harvest during a dry period – use a fork to gently lever out – don’t pull out by the tops. Don’t be concerned if it’s flowered.

Garlic can be stored by hanging, laying on airy racks above ground, or plaited and hung out of direct sunlight. If you want to make garlic plaits, do this whilst tops are still green – once the tops have dried, it is difficult.

Garlic takes about two weeks to dry; however, if you can’t wait, use it ‘green’, which means it will be very juicy. The garlic tops and flowers can also be used in cooking.

Elephant garlic is also great to grow – note this is actually a variety of leek, not a garlic. It can be planted and harvested a few weeks later than garlic. The huge blue flowers look stunning in a cottage garden and the cloves have a milder flavour for eating.

Since the article above was published, Robin Gale-Baker and I have had a series of conversations about garlic planting. If you plant garlic too early (i.e. when it is too warm), the resulting bulbs may not divide into separate cloves. If you plant too late, the bulbs may remain small (because, driven by length of day, the garlic starts trying to form bulbs when it is too young). One potential way around this dilemma is to keep the garlic in the fridge for some time before planting. I experimented with different timings and different refrigerations and one of the conclusions was that refrigeration did, indeed, allow for later successful plantings. Read the results of the experiment. Here is Robin’s current advice: “In the ‘old days’, before climate change, garlic would often be planted in March but these days the ground is too warm then (the perfect time to plant garlic is when soil temperature is 10°C at a depth of 8cm at 9am in the morning). Arguably, this is also becoming the case in April. So, commercial growers are increasingly giving their garlic a ‘false winter’ by refrigerating it for 40 days and then planting it out in May. This process is called vernalisation and helps late-planted garlic to develop large bulbs. If you want to copy these growers, you should be purchasing your garlic soon and refrigerating (not freezing) it in mid- to late-March. Buy from reputable sources (probably online or at farmers’ markets as nurseries won’t yet be stocking garlic heads) and do not use imported garlic as this may well have been sprayed with methyl bromide and a shoot inhibitor.”