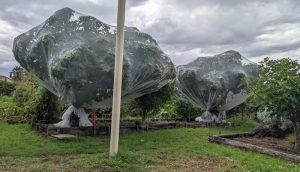 I found Gravel Hill Community Garden by accident while walking around Bendigo looking at old buildings. It is situated in Bramble Street behind the former school buildings that have been used by the Salvation Army for years.

It was open so I walked in. Luckily Mohammed Khalaf, the coordinator of the garden, was there. Actually, he’s there three times a week and volunteers his services. He is an ex school teacher in science subjects but has been retrenched. He has a PhD in plant taxonomy and his special field is desert plants of Iraq, including the ones that Bedouins use for food and medicine. He also cooks so has given me a favourite vegetarian recipe. 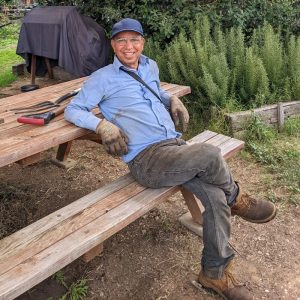 Mohammed started looking after this garden in 2017.

He has been directing volunteers and Work For The Dole participants and also doing a lot of work himself, including experimenting with different plantings and design of garden beds.

One of Mohammed’s tweaks was to create a shallow trench down the middle of the too-wide beds, so the trench would collect moisture and you could walk there to harvest vegetables efficiently.

He deals with the masses of invasive runner grasses and weeds by composting them on the pathways between the beds. He lays them down, waters them in and covers them with long rolls of carpet. He then makes sure that they keep moist as that helps the decomposition. The soil in the beds is now great thanks to the large amount of compost produced. Most of the paths are now covered in wood shavings or sawdust. 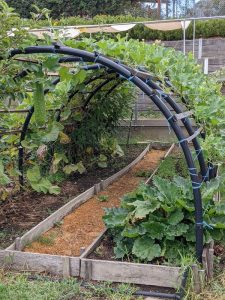 There were some unusual vegetables in the garden that Mohammed likes, and that the local Karen and South Sudanese community also like, such as okra, purslane, snake beans, a related non-climbing type of snake bean (that produces an abundance of short pods the size of ordinary beans but skinnier), water spinach (kang kong), hot tiny chillies, and a hairy melon grown over the tunnel. They also have lots of ‘ordinary’ vegetables and a number of fruit trees.

The harvested vegetables are sold to a local restaurant, which therefore serves vegetables in season. The proceeds go to back to the community garden.

There is a lot of infrastructure here – a shed and kitchen area (where produce is weighed and stored before distribution), toilets (of course), and a beautiful big seating area with a shade sail above surrounded by greenery. There are lots of garden beds on different levels and different bed designs. If you are ever in Bendigo, go and have a look. 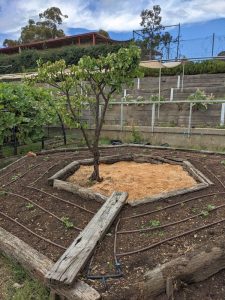 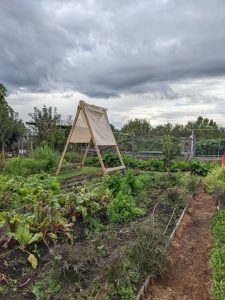 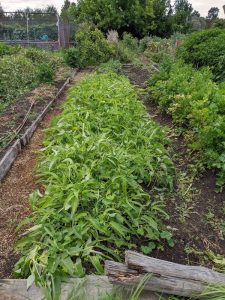 Purslane is a common weed and nutritious traditional food in Arabic cuisine.

Ingredients
a bunch of purslane
one onion,
2 spoons oil
curry powder or Morroccan spice powder
chopped tomatoes and/or tomato paste.
salt
red lentils (optional)
a cup of water (if lentils are being added)

Wash and chop the purslane.

Fry the chopped onion in the oil in a saucepan, add the curry powder or other spices and fry until caramelised.

Add the purslane and toss.

Optionally, add a small amount of red lentils. If adding lentils, also add a cup of water as they absorb a lot.

Lower the temperature and cook for 15 minutes.

Serve with rice or bread.

One Response to “Gravel Hill Community Garden in Bendigo”