Judy Vizzari visits the garden of Jules Jay and Robin Longworth, from Hurstbridge. Jules is an active member of both North East Region Permaculture Group (NERP) and the Edible Hub Hurstbridge community garden. 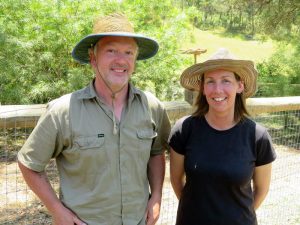 At last Covid-19 restrictions have eased and today, on a December morning, I’m making my first garden visit since lockdown. It is to Jules’ and Robin’s 18-acre property south east of Hurstbridge.

To get there, Google Maps advises me to travel north along the main Hurstbridge Road then to turn east through winding back-lanes to reach to the property … bad advice – I find myself consigned to dusty, barely labelled, unmade roads and my little car jumps nervously at every corner. I discover too late that there is an easier route! But this wayward trip is worthwhile all the same as the bushland is at its khaki best.

I reach the farm at last, which is set in a long, narrow valley. The driveway sweeps 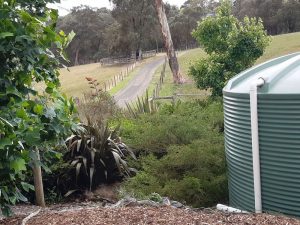 downwards before climbing up past a barn to a north-east facing 1970s house which is perched just below a rim of natural vegetation.

I‘m greeted by a dog who is an effective doorbell – she barks dutifully at this stranger until Jules appears. I see a slender younger woman with a confident air and friendly smile. She welcomes me to their home. 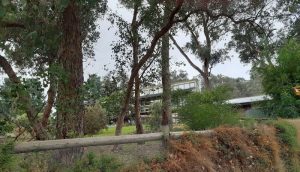 We set off on a garden tour and I get a first-hand view of their water catchments when we walk up to a large dam high up at the back of the property. It’s contained by a wall which stretches across the valley and is fed by rainfall and run off from the slopes above and around it. It services the property’s two orchards and many livestock troughs through a series of underground pipes. I see that it is full.

Walking back to the house and garden, we pass four 32,000 litre water tanks, which are but one collection point in a series of tanks scattered across the property. Aside from the dam, Jules and Robin have storage for 270,000 litres, and Jules says they 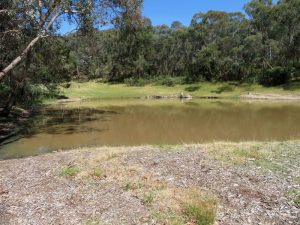 “rarely run out of water.“

This land is inhabited by native fauna as well as introduced species including deer, rabbits, foxes and birds. Both native and introduced animals are eager to enjoy the local produce and, Jules says, theirs is an ongoing negotiation with wildlife about how to share the harvest. Netted orchards have helped to exclude the deer, who eat the fruit, damage the trees and make wallows of any moist ground. The rabbits, kangaroos, parrots and songbirds, though, continue to enjoy unnetted plants and produce, while crows, hawks and eagles make regular bids for unwary chickens and hatchlings. Jules says that they have agreed on a truce with the foxes after installing electric fences. 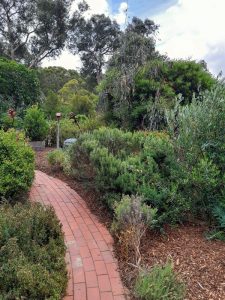 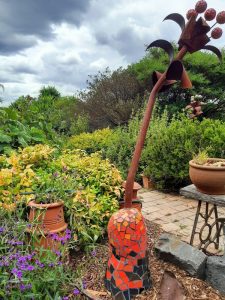 The view out from the house through a long row of windows overlooks a “pleasure garden” and it’s here we go next. There’s a colourful blend of both native and introduced plants – some ornamentals, herbs and fruit bearers occupy this space, as do interesting sculptures by Eltham artist Nicola Hoyle, which appear to be almost organic and blend well with the mixed plantings.

I’m surprised by a partially hidden oddity; an amazing Hollywood style swimming pool complete with huge palm trees and a waterfall! It’s a project bequeathed by the previous owner. Jules has threatened to convert it into a 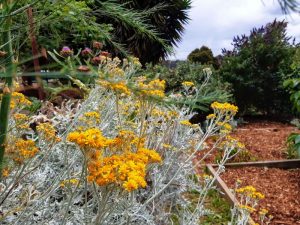 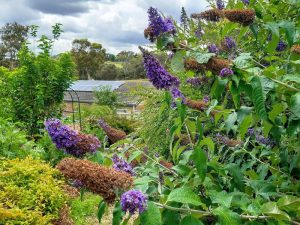 natural pool and water garden … but there’s opposition from both Robin and younger visitors.

A path runs through this area then slopes downwards past more sculptures and fruiting trees – we pass a persimmon, loquat, fig, feijoas, citrus, mulberry and quince. 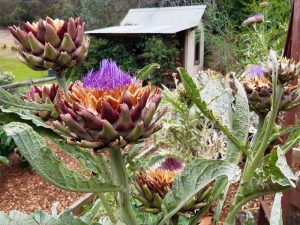 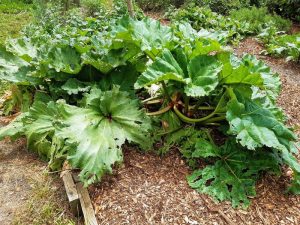 To our left is an orchard entirely housed in chicken wire and bird netting. The structure is huge and provides space for at least 30 fruit trees including citrus, stone fruits, figs, apples and pears, some espaliered, 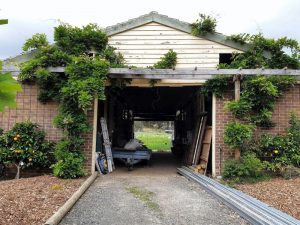 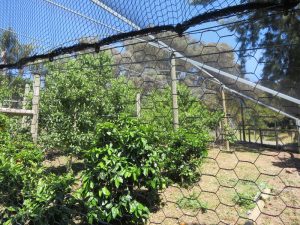 some dwarf and some upright. Below them, heavy grass provides food for a family of chickens.

Further down, we arrive at a picturesque barn. It’s dressed in espaliered oranges and wisteria vine. “I had a vision for a charming arbour dripping with purple flowers,” Jules says, “but the reality of wisteria is that it just goes crazy and climbs everywhere!” The vine is rampant and interfering with the solar panels on the barn’s roof – it’s soon to be trimmed. 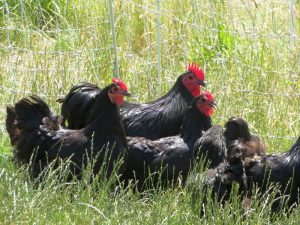 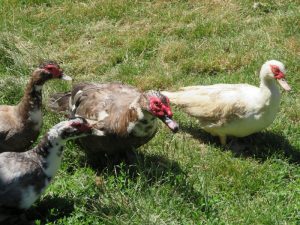 Here, you can’t miss the sound of clucking and honking which emanates from the poultry area at the barn’s other end. There’s a population of chickens, roosters, muscovy ducks and geese that share a lush paddock and, Jules says, in that grassy square there’s a “constant soap opera” playing out as the pecking order is observed. The birds are housed safely in the barn at night and the whole area is protected by electrified fences. In the middle of this poultry space is a furrowed area which has recently been planted with capsicum, eggplants, corn and a crop of sauce tomatoes – late plantings, as this year’s wet season so completely soaked the paddock that seasonal tasks were 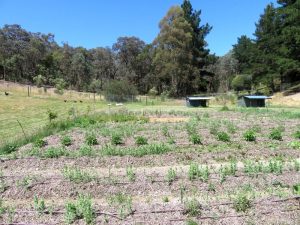 Over to the left, another fledgling orchard is visible. It includes a mix of stone fruits, apples, cherries and pears. When the plants are more mature, they too will be protected by mesh and netting. This site is open to the elements and will benefit from maximum sunlight, but initially suffer from extreme temperatures.

To our left, in a paddock bounded by the driveway, we glimpse two cows – ‘brown cow’ and ‘white cow’ – who are munching steadily on a rich pasture of natural grasses. They stop to observe us briefly before returning to their grassy spread. 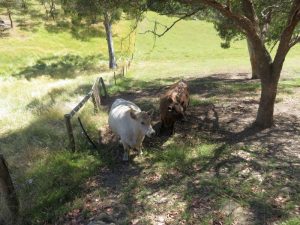 Somewhere, bees buzz – they’re completing their rounds before returning to the hives maintained by Jules and Robin.

All these insects, birds, animals and people are working members of this community and contribute to its livelihood.

Back to the house

We return to the narrow culinary garden at the back of the house and a step from the kitchen door. It’s bounded by a high cutting chopped into the line of the hill. The garden contains a diverse blend of plants which range from bananas, ginger and cardamom to raised beds supporting leafy greens, cucurbits, capsicums, eggplants and salad mixes. They are planted (and self-seed) together in true permaculture style. Some crop rotations and regular additions of compost, manure and mulch in this area ensure that the soil remains healthy and that the greatest benefit is derived from each season.

Jules says that she “doesn’t spend too much time in the garden,” but then, when you love gardening, how much is “not too much time“?

Jules is an active member of North East Rangers Permaculture Group (NERP), which is a group of local farmers and gardeners who employ permaculture methods and are keen to share their experiences with other gardeners. The group was first established in the early 1990s. Its members practice a wide range of individual methods bound by permaculture techniques and they aim to be self-sufficient and to utilise low impact, sustainable means of food production and life management.

She is also a co-ordinator of the Edible Hub Hurstbridge community garden, which is part of Nillumbik Council’s Hurstbridge Hub facility in Graysharpes Road. 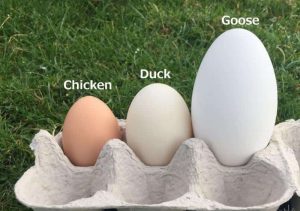 When I arrived, Jules invited me into her kitchen and I was surprised to see, laid out on the bench and in multiple shelves, dozens of eggs of varying sizes from huge (goose eggs) to medium (duck eggs) to small (chicken eggs). And so we talked about the eggs and their uses (she recommends chicken eggs for eating and duck eggs for cooking). She told me that the birds are the farm’s main focus, then described the work involved in breeding and caring for them, including sessions of humane slaughtering and highly organised plucking and cleaning. Jules and Robin are ‘nose to tail’ eaters and utilise all parts of the bird – they’re either cooked and consumed (meat and offal), or used to make soup and stock, whilst fats are rendered for lard and feathers are consigned to compost.

Here, the lives and deaths of all the animals are managed – the cows provide meat and manure, the poultry provide eggs and meat, an apiary is maintained for honey and the garden produces fruit and vegetables. Preserved foods: sausages, salami, sauces, jams, passatas, dried fruits and frozen or tinned vegetables. Seeds are saved and raised in the farm’s greenhouse and crops are rotated for maximum disease-free production. Manure and kitchen scraps augment compost which is returned to the soil to benefit new crops, nothing’s wasted, not even sun or rain.

Jules says that she “never goes to the supermarket,” though she does occasionally buy what she can’t produce – pulses and grains, milk and treats, from Nature’s Harvest in Hurstbridge or the farmers’ markets in Hurstbridge and Eltham. Her ethos is that, if they can’t grow it themselves, they source it from the most local and sustainable alternative.

Even though such a large, cultivated space does represent a lot of hard work, and perhaps a little heartache, Jules and Robin must derive a tremendous sense of achievement and pleasure from their efforts.

For me, this walk through their garden has been fascinating. Theirs is a farm well worth visiting if you get the opportunity. They’ll show you how they work towards utilising all their property whilst also contributing to a cleaner and safer world.