Marina Bistrin is an avid gardener. Here she discusses permaculture in Cuba. 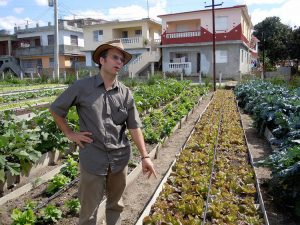 I would love urban and peri-urban organic farming to become the norm, and to have arable land preserved for farming under law. I’ve recently been re-reading the 2009 Permaculture Diary which was written by someone called Michelle Margolis and which has a section on sustainable agriculture in Cuba where, for example, around half of all vegetables consumed in Havana are actually grown in the city.

I would also love us to stop using single use plastic as quickly as possible – especially as we are now going to have to put most of our plastic waste that is unrecyclable into landfill, given that China won’t take any more. Local permaculturist Ian Culbard visited Cuba a few years ago and tells me that, until recently, they were able to compost or recycle all of their waste as they didn’t have much access to plastic as there were embargos on imports.

Re-reading the old Permaculture diary, and remembering Ian’s talk about his visit to Cuba, has inspired me to write this short article about permaculture in Cuba, with information taken mostly from the Permaculture Diary.

After the collapse of the Soviet Union in the early 1990s, trade between Cuba and the Soviet Union stopped and subsidies received from the Soviet Union also stopped (there was an embargo already in place from the USA; their closest neighbour). As a consequence, there were acute food and petrol shortages in Cuba. In reaction, they started growing food and raising animals in the cities and on available land nearby. From necessity, they farmed organically as they didn’t have access to industrial fertilisers and chemicals. They also used their animals for ploughing. One of the transport methods was by horse taxi and the horse manure dropped on the streets, was valuable for the organic gardens and quickly gathered.

Here are some quotes from the 2009 Permaculture Diary by Michelle Margolis.

“Cuba now has an extensive system of intensely cultivated urban gardens known as ‘organoponicos’, and state-run farms and cooperatives outside the city. Food gardens are part of most schools and work places and Cuban farmers are now among the best-paid workers in the country”.

“30% of available land in Havana is dedicated to growing organic food. Urban food-growing land is protected by the state … the health of the Cuban people has improved dramatically … and Cuba has one of the lowest infant mortality rates in the world and quite a lot lower than the United States. Instances of diabetes and heart disease have fallen since the diet has changed towards an increasingly fresh, vegetable-based, organic diet with more people cycling to work, through necessity rather than choice.”

“Organic, local, food-growing systems are, by definition, grass roots and therefore far more democratic that large-scale monocultural systems based on export, profit and external ownership rather than local food needs met by local growers. Farmers in Cuba usually own their own land and no one is allowed to own huge areas of the country of plunder it’s wealth for export and profit. Therefore Cubans have a sense of security over and pride in their farm produce.”

Quote from Megan Quinn in a 2007 article entitled The Power of Community: “Today an estimated 50% of Havana’s vegetables come from inside the city, while in other Cuban towns and cities, urban gardens produce from 80% to 100% of what they need.”

Quote from Raquel Pinderhughes, San Francisco State University in a 2000 article entitled Urban Agriculture in Havana, Cuba: “Cuba is the only country in the world that has developed an extensive state-supported infrastructure to support urban food production and urban growers. Functionally, this infrastructure emerged in response to acute food shortages in the early 1990s; ideologically it grew out of the Cuban governments view that access to nutritious food is a basic human right.”

Also: “[By the end of 1992] Havana had no food production sector or infrastructure, almost no land dedicated to the production of food. Worsening food shortages motivated Havaneros to spontaneously began to plant food crops in the yards, patios, balconies, rooftops and vacant land sites near their homes. In some cases, neighbours got together to plants crops – beans, tomatoes, bananas, lettuce, okra, eggplant and taro. If they had the space, many began to raise small animals –chickens, rabbits, even pigs. Within two years, there were gardens and farms in almost every Havana neighbourhood. By 1994, hundreds of Havana residents were involved in food production.”

Finally, what I would particularly like to highlight and commend Cubans for is that I believe that preserving our farms (and especially farms near cities and towns) is vital and needs to be enshrined in law. Also, that access to nutritious (preferably organic) food is a basic human right (this does not mean access to the junk food and food that has pesticides in it that many people subsist on). I am also impressed that the people who produce the food in Cuba get paid well. Food is the most important thing we have and I feel that people who provide us with essentials should be adequately paid. It’s a matter of respect and showing what we value highly by paying the people well who provide those services.

2 Responses to “Permaculture in Cuba”