Judy Vizzari visits the garden of Paula and John McLeod, from Hurstbridge. 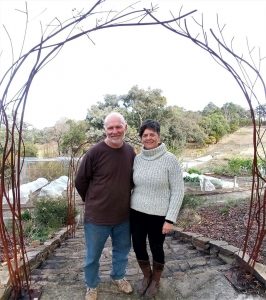 I’m visiting Paula and John McLeod’s urban farm in the hills behind Hurstbridge. At a turn in a rather adventurous country lane, I see my destination marked with an impressive entrance and curving driveway edged with olive trees. We’re close to the top of a high hill and the view before me is expansive. This property is alluring.

As I enter the driveway, I see a formal garden to my left, a dam to my right and, beside it, is a long narrow paddock finishing at another, smaller dam further down, below which are rows of raised vegetable beds protected with fine white netting, a small enclosed orchard, berry patch, bee hive and chicken run. This view encompasses the southern side of the property. Before me, I see an impressive north-facing home built on a curve to capture the sun and provide a view of the blue-green valley beyond. In the distance, the Kinglake Ranges rim the view.

This is a 20 acre property, I wonder at the enormous task that the owners, Paula (originally from Adelaide) and John (Brisbane born) took on 30 years before when they first planned to create their farm by using natural resources and organic and sustainable methods. Even though the recent seasons have been difficult, it appears, at first glance, that they’ve achieved their goals. 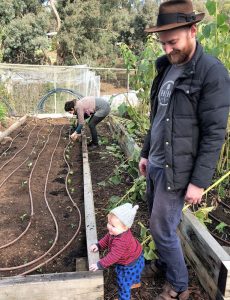 I’m greeted by Paula and she leads me into their home and lounge room, bright with a warming open fire. John is chatting with Zoe, Lachlan and eight month old Quinn – I learn that they are locals and friends of the McLeods.

Straightaway I’m inducted into the McLeod’s style of living and giving. Zoe is the head chef in a tiny restaurant, Greasy Zoes, in Hurstbridge. It seems that the family is relatively new to Hurstbridge and they are committed to using the finest sustainably and locally produced ingredients in their restaurant – from sourcing them to preparing and serving them. While they were searching for locally produce, they encountered the McLeods.

Now, they’re taking this association one step further: they’re learning how to grow their own vegetables under Paula and John’s instruction and have undertaken to maintain two large vegetable beds on their property. Fortuitously, today, they’re commencing this project. 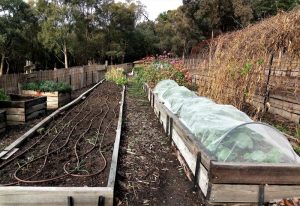 And so, with Paula balancing baby Quinn on her hip, we walk out to the southern vegetable garden. As we stand in the cold air and I gaze down onto a row of around 10 raised, non-treated, hardwood framed beds, each 6m by 1.2m, I’m reminded of pictures of rows of unearthed Chinese Warriors. To a gardener, this row is probably as inspiring as the warriors are to historians.

The beds contain a mixture of vegetables and flowers as Paula mixes flowers with vegetables to attract beneficial insects, birds and lizards. They also provide forage for bees  and thus assist plant pollination. One or two beds are noticeably empty and it’s around one of these that we see Zoe, Lachlan and John at work. They’ve just finished weeding the fallow soil and are now ready to cultivate it prior to planting their seedlings. 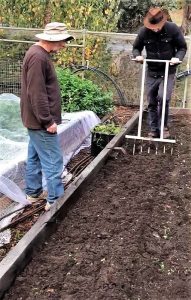 John is demonstrating an unusual tool, a ‘broadfork’ or ‘u-bar digger.’ It’s a regenerative gardening tool rather like a wide fork but manufactured with rounded prongs according to an old design. He explains that it aerates the soil without turning it or disturbing the worms and their castings. As Zoe slips it easily into the deep, richly composted soil she attests to its ease of use. In no time the bed is prepared for planting.

It’s now that Paula, Zoe, Quinn and I head off between the house and an earthy pizza oven, en route to the other side of the house where the land continues to slip down to the valley below. There’s a glasshouse here, more vegetable beds, two dams, a potting shed, some lovely walkways and, beyond them all, an open paddock contained by a native bushland – a feature which fulfils the Zone 5 ‘wild’ area prescribed by permaculture practices.

A place for reflection 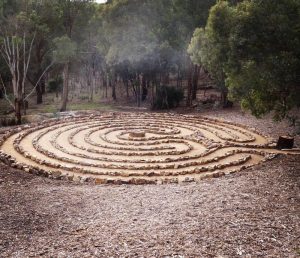 Through the tract of bushland, a path leads to a flat, sculpted area which Paula and John call the ‘Labyrinth Meditation Space’, an charming inward spiralling pathway defined by Castlemaine spalls. Nearby there are some carved tree stump seat ‘pods’. The whole effect is mystical, one of peace and tranquillity. It’s a place for meditation and is used regularly by Paula.

There’s a paddock here, too, occupied by an old black alpaca called Dark Shadow. It seems he’s a social animal who has forged a friendship with a local kangaroo and the two share their meals and company. I see them now, close but not too close, happily grazing in the paddock. It seems that the wild birds also have a relationship with Dark Shadow – his fleece is much sought after to line their nests. There really does seem to be a connection between these birds and animals – the sense of community here extends to all its inhabitants.

Plants for the plot and pot 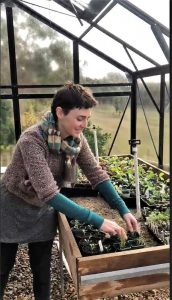 The glasshouse nurses seeds which are planted in a potting shed further up the hill. It’s surrounded by low-growing mixed citruses on one side (the trees are loaded) and more tiered vegetable beds on the other.

Inside the glasshouse, it’s welcomingly warm. There are benches of seedlings produced from Paula’s saved seeds, tools, a misting water system and scant else – no sign of sprays or poisons. Paula says that she staggers her plantings of seeds so that the seedlings – broccoli, cauliflower, peas and winter greens – are all at different stages of development and, once mature, will feed the household throughout the cold season.

Zoe chooses several varieties and heads back to their new vegetable plot on the southern side of the house while Paula and I continue on down the slope to meet Dark Shadow. We pass raised vegetable beds well placed for morning sun and obviously productive, although many have been ravaged by wildlife including kangaroos and deer, Paula explains that the loss of harvest to predators has been disappointing but understandable given the dry summer and autumn.

A change of tour guides

Now John and Lachlan appear in search of Paula, whose knowledge of planting and growing is needed back in the southern garden, while John and I continue on alone. We skirt one of the four dams on the property. It has a deck, a sculpture and a complimentary beached boat (full of water) which adds a touch of humour to this scene. There’s a kayak here too and it seems that it has been used on the dam, but not for fishing, even though there are fish and yabbies in the water.

Efficient use of a natural resource 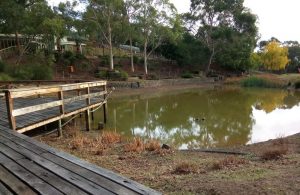 John tells me how the four dams on the property create a reserve of water which serves the garden beds all year round. Water is directed to the dams through paddock key lines, an underground overflow pipe between dams and building run-off capture. The collection, which is pumped to each corner of the cultivated space, is adequate to maintain a wide range of exotic trees and shrubs, native plants, lawns, rockeries and food growing species year round. This collection and distribution is handled efficiently and also contributes to the landscaped features of the property.

Apparently the McLeod’s two pet pigs make good use of the waterways too, in a favourite wallowing spot just below the top dam – their personal beauty parlour! Frogs also take advantage of the number of billabongs and ponds abutting natural bushland.

The ‘high side’ of the house 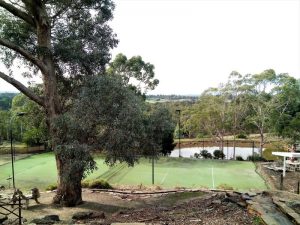 John takes me back up the hill past a synthetic-grass covered tennis court (one of the few ‘synthetic’ products on the property) flanked by rhubarb, currants, avocados, hazelnuts and almonds and a herb garden. Leading up to the potting shed is a path under a bay tree walk and I’m told that the beds either side are planted with masses of flowering bulbs – it must be a beautiful sight in the springtime. Through the potting shed, we emerge at the top of the property in ‘the Reflective Garden’, where a partially hidden sculpture resembling a bird hide, and made from woven local canes, stands. There’s a wisteria-graced pergola here and more sculptures too, plus water features and, above all, two magnificent peppercorn trees which I hear were planted many years ago by the land’s former farmers. 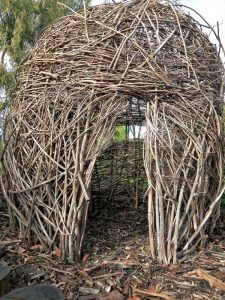 So, we’ve done the circuit and are now back on the southern side where my car is parked ready to take me home. Zoe and Lachlan have planted out their bed with brassicas and peas; baby Quinn, who has been so good, appears to be ready for her lunch; and I’ve seen so much I’ve reached overload. Just some photos to take and then it will be time to go.

This is a place which seems to me to be in tune with its local community, a community which honours talent and ability, respects and utilises natural resources, shares its bounty and is dedicated to living well in Melbourne’s outer north east.