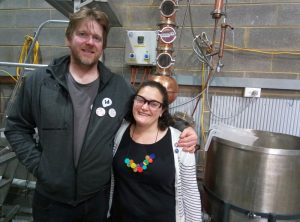 You’ve probably heard of a Dry Martini, but what about a Suburban Hot Toddy or a Cinnamon Apple liqueur. And do you know the difference between Australian gin, English gin, gin cocktails and gin liqueurs?

I must admit I knew little of the gin tradition until recently. So, when Guy Palmer handed me a brief to visit Mick and Mel Sheard at their gin distillery in Research’s industrial estate, it seemed sensible to find out a bit about gin’s history and distilling processes before fronting up to the experts. So, I referred to (1) a cocktail book which I found on our bookshelf (long unopened) and (2) my old friend Wikipedia.

Researching the brief with Mr Wiki

Did you know that one of the earliest references to gin-making appears in the encyclopaedic work Der Naturen Bloeme (Bruges) in the 13th Century?

In the Netherlands in the 17th Century an alcohol based drink called Jenever was distilled and drunk widely.

In England in the 18th Century gin became a cheap and ‘relatively safe’ alternative to water with many homes brewing their own liqueur under the umbrella label ‘gin.’ It seems that they used juniper berries and whatever other ingredients were available (including turpentine!) to flavour their liquor and, not surprisingly, their health sometimes suffered. So much so that eventually laws were passed to control its manufacture.

In the early 20th Century, during the Great Depression and American Prohibition, illicit gin was once again the choice of many. In summary, gin, in some form or other, has been with us for centuries.

So, armed with new found knowledge I front up to Mick and Mel’s Imbue Distillery.

The distillery is amongst warehouses which all seemed to be closed for holidays, so I park beside the only other vehicle in sight – a grasshopper green Kawasaki motorbike – and it occurs to me that it, the bike, may possibly be a reference to the ‘Grasshopper’ cocktail. Is this Mick’s joke? Something to discover.

The doors are open but the place is silent. “Is anyone here?” I call out and am greeted by a cheerful male voice somewhere ’round the back.’ Mick appears, freckled, sandy haired, tall, stout and slightly dishevelled – perhaps the kind of man who would ride a green Kawasaki? Straight away it’s his boyishness I notice, he’s open and friendly, his eyes are direct and he seems to be labouring under the spell of his venture – a man with an obvious energy and enthusiasm for his life choices and especially his distillery.

He tells me that Mel will arrive shortly and, in the meantime, he takes me on a guided tour of their premises.

The warehouse has two back entrances – a formal hallway and a drive-in opening for deliveries. That’s about where its similarity to traditional warehouses ends. It’s tiny, wedge-shaped and with a very high ceiling – as high as a second storey ceiling. Just inside the drive-in entrance is a storage area for bottles – stacks of them reaching up into the second storey realm. Further back towards the point of the wedge are multiple spaces housing an office, stock storage (an area lined with shelves supporting rows of sealed bottles) and a tasting area, replete with samples. There’s a ‘front’ area too, for display, although I’m told it doubles as a retreat for the couple’s six-year-old daughter.

But the area which is most notable is the distillery itself, which is round the back in the zone leading off from the entrance.

Now, Mel arrives. She counters Mick’s height and fair colouring with her diminutive size, her fine, pale complexion and dark, wavy hair. Heavy framed glasses encircle sharp dark eyes and she speaks with a natural authority. I guess that she’s a perfect balance to Mick’s creative presence in this partnership.

And so we talk about gin and ‘the botanicals’

I learn that gin is a distilled blend of almost pure (96% proof) alcohol plus ‘botanicals’ (aka flavourings), with juniper berries its signature ingredient. Mick and Mel use a grape-based alcohol and add carefully sourced ingredients. They take pride in “selecting and blending combinations of locally abundant flavourings as well as the obscure and exotic, to bring both new and nostalgic experiences” (from their brochure). 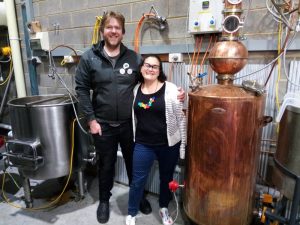 Amongst their foraged botanicals are prickly pear fruit, wild fennel, dandelions and berries and the traditional flavourings include juniper berries, citruses, ginger, vanilla and honey. Together they impart the distinctive tastes to their gins and liqueurs. I’m curious about the prickly pears in particular, they are fruits little used from an introduced plant, classified as a weed and with a long Australian history.

Imagine a huge gleaming copper boiler a little like mum’s old laundry ‘copper’ (a heated copper trough), but enclosed and sporting dials and an entrance point for fluids and flavourings. Above it is a large copper ‘basket’ and, protruding from that, a chimney reaches upwards. It’s interrupted by eight round internal plates, each with tiny holes to allow steam to pass through under pressure. Atop each plate there is a dial and window in the 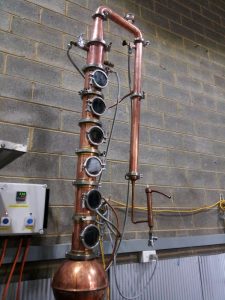 chimney wall which enables the distiller to monitor the process. It’s possible to see pressurised fluid spraying against the dials’ faces. High above, the chimney bends sideways then plunges down to more pipes which cool the liquor and lead to a hose poised above a waiting receptacle.

There’s something mysterious and medieval about this equipment.

Cooking up a storm

Mick gives a quick rundown on the distilling process. Once the alcohol and flavourings have steeped in the ‘copper’, they’re boiled to the point that vapours rise and push upwards through the ‘basket’ and chimney plates. For several hours, the liquid condenses and re-condenses on a journey up and down the chimney till eventually the resulting refined gin drips from the still through the top of the chimney into a series of copper pipes and hose that lead down into a waiting receptacle. As I watch a thin stream of fluid spurts from the hose, we sample it – it’s pleasantly warm, heady and strongly alcoholic. 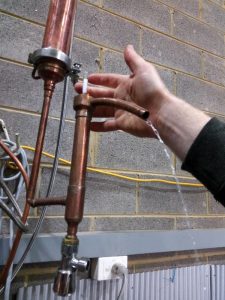 So that, roughly, is the gin making process, but there’s a whole lot more to it than that.

It’s Mick and Mel’s Australian range of gins that sets them apart. There’s the First Fleet, a liqueur coloured by the skin of the prickly pear fruit to a brilliant red and flavoured with its fruit. Their Suburban gin has dandelion, prickly pear, blackberry and fennel botanicals, and some of it is aged sherry barrels which noticeably changes the taste. There’s also the All Seasons, an aniseed barrel aged liqueur sweetened with honey, and others, including The Elixir and The Journey.

We wander into the tasting room where I sample their prickly pear based First Fleet liqueur. It’s quite thick, not sweet. It starts with melon and ends with citrus flavours which linger in my mouth long after my glass is empty. It’s delicious and I imagine it would be perfect mixed or sipped cold on a lazy, warm afternoon. 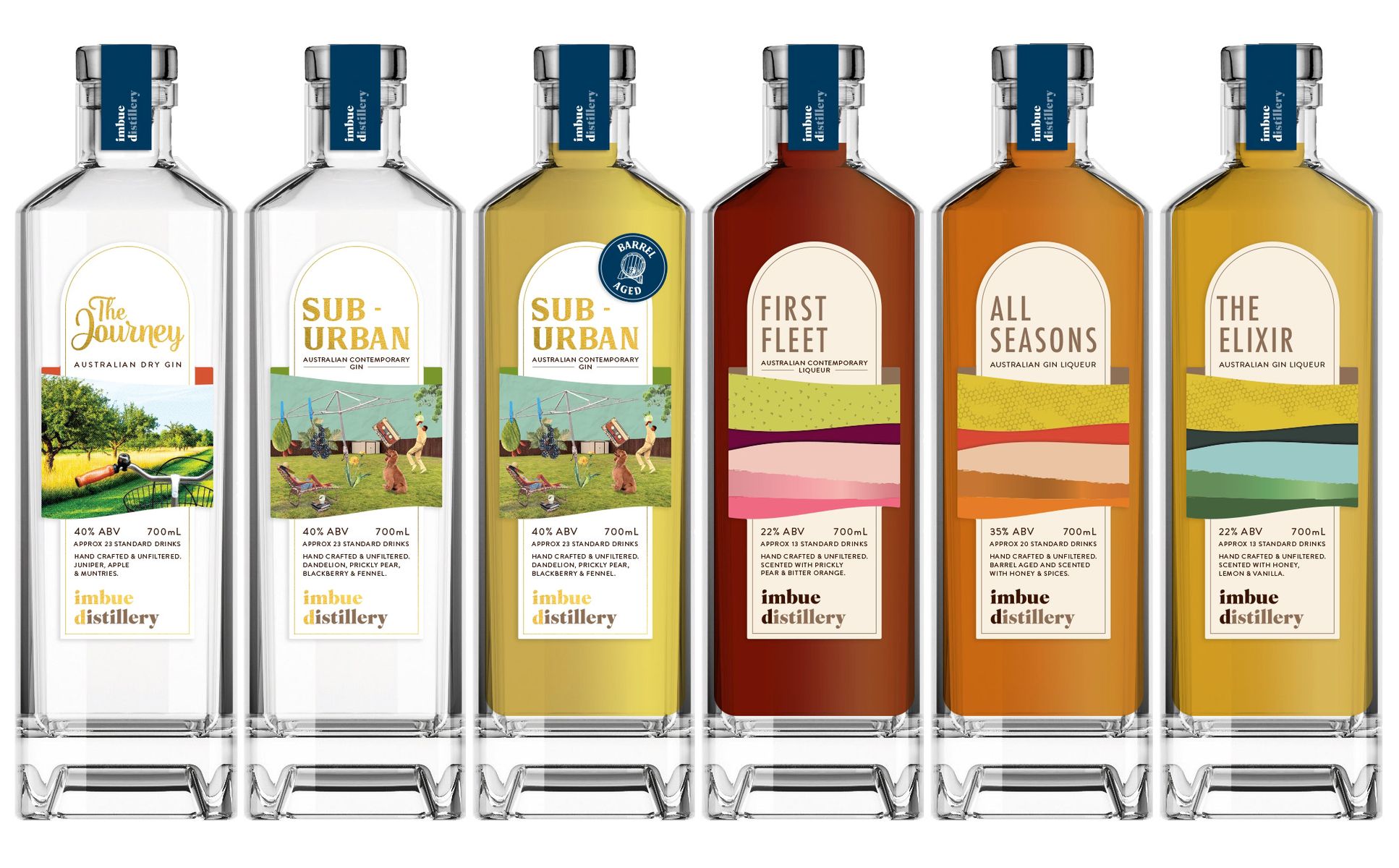 So we talk about this distillery, the first and only one in Nillumbik currently, and the circuitous path that Mick and Mel followed to obtain a permit to distil their liqueur here. It seems that it wasn’t easy, although Mick says that Nillumbik Council was helpful and worked with them to set up a complex licencing process.

Mick is a baker who says that he loves baking and enjoys his part-time job managing the bakery in a local supermarket. Mel is a chef who has worked at some ‘hatted’ venues including the National Gallery of Victoria. It’s their dream to build this business and to produce top quality spirits which are intrinsically Australian.

By just glancing at their packaging, I can see that they aim to satisfy high end criteria. Mick tells me their bottles are the best available – I see they’re lovely clear glass gin bottles which could also double as decanters. They’re manufactured in Spain, imported then dressed with labels bearing distinctively Australian designs (cricket in the backyard!). Their product is made with care, knowledge and love.

This young family has a dream and they are chasing it with both energy and commitment. It’s not an easy life, but it seems they wouldn’t have it any other way. I’m heartened to see their enthusiasm and delighted with their product.

Now it’s time to go so I thank them for their hospitality and leave, pleasantly entertained by my visit.

So, what’s a Suburban Hot Toddy? A mixed drink of course, but you’ll have to ask Mick and Mel for details! And what about the grasshopper reference? Back home I flip through my Cocktails & Rock Tales booklet only to discover that the Grasshopper cocktail is made with crème de menthe, crème de cacao, cream and ice – no gin! Too late to ask whether it was even Mick’s bike!

Where can you try their gin?

One Response to “Mick and Mel Sheard, from Imbue Distillery – suburban hot toddy”