Additional material from Guy’s tips: how to prune raspberries

There are two types of raspberry:

Now is a good time to be pruning your raspberries because, whichever type you have, it will have finished fruiting for the year. However, the two types should be pruned differently. If you haven’t yet worked out which type you have, prune them as though they are ‘summer bearers’.

For the ‘summer bearers’: cut all the canes that have fruited down to the ground (because they won’t fruit again). If you don’t know which canes have fruited, they are the longer and thicker ones, and they often have multiple lateral branches. Thin the others to 5-7 per plant, shorten them as desired, and tie the ends to your trellis.

For the ‘everbearers’: you can prune them like the ‘summer bearers’, in which case you will get two crops (in summer and autumn), neither of which will be prolific. Alternatively, you can sacrifice next summer’s crop for a better autumn crop by simply cutting all the canes down to the ground. Clearly, the second approach would not be good if your raspberries are, in fact, ‘summer bearers’ as it will result in no fruit next year! But it is (arguably) the best approach if you want raspberries in the autumn, and it is also the quickest. 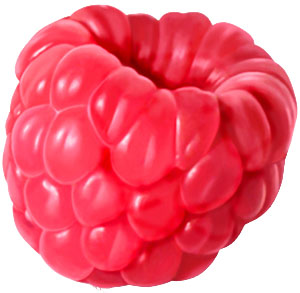 The intense flavour of a home-grown raspberry picked fresh from the bush encourages many people to plant raspberry canes.

The downside is the space and structure required to grow the canes and their maintenance. However the home-grown raspberry’s superior flavour compared to those bought in plastic-wrapped punnets from supermarkets makes it well worth the effort. Being able to feast on raspberries, rather than use them sparingly due to cost, is also a treat.

Raspberries grow on canes, which are planted from late Autumn to Winter. The canes usually come bare rooted with little or no leaves and are about 20-30 cm tall when purchased. However they are also sold potted up early in Spring (for a higher price) when they have started to come out of their winter dormancy.

Raspberries are best grown in rows, with bunches of canes (about 3 canes per bunch) planted 30 cm apart, running north south to maximise sunlight. Strong trellis support about 1 metre high is required along the row to support the canes – usually three or so thick wires are run between posts. The canes are tied up the trellis as they grow, then trained across the wires.

When planting the canes, dig a trench along the row and fill with soil improved with plenty of compost and manure. The raspberry cane can be hilled in a mound on top of this to allow plenty of drainage. Mulch heavily with straw and avoid weed growth, as this can deter fruiting.

The answer to this question depends on how many raspberries you want to eat, combined with how much space you have. For a family backyard, try 6 to 12 canes initially, depending on space available. Around 20-30 canes may produce a surplus for jam and bottling.

Canes are dormant in winter and usually bare. In Spring, canes grow vigorously. Some fruit may be produced on fruiting buds in the first year, depending on variety, but don’t expect a significant harvest until the following year.

With everbearers, fruit is produced on ‘first year cane’. These plants require less maintenance. Cut all of the plant back to the ground after fruiting each year. To produce more fruit, after a few months of rapid Spring growth, you can also prune plant growth slightly to encourage more fruiting laterals.

Netting is the only good solution to deter birds, who love the ripe, red fruit too. Generally, backyard-grown raspberries are not prone to many diseases; however, to help deter any fungal diseases, keep mulch away from the base of the plant.

Protect from hot afternoon sun and hot, dry winds if possible, as this will dry out fruit.