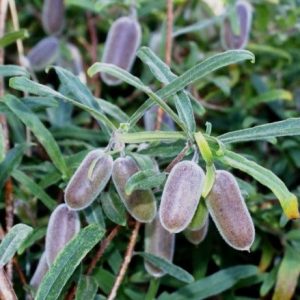 Apple berry is a bush tucker plant that grows naturally along the coast and tablelands of every state and territory in Australia except Northern Territory and Western Australia. Because of this, it adaptable to our climates and soils and will even grow under a eucalypt! Once established, they actually cope quite well in acidic or alkaline soils and in clay, loam or sandy soils.

If given the proper climbing structure, it will climb (we grow ours up the tree pillars in the forest). They also act well as either a groundcover or small shrub.

The fruit tastes similar to stewed apple or kiwifruit, and are either eaten raw when ripe or

The flowers, which appear in October and November, are bell shaped yellow to pink and form in clusters.

In summary, apple berry is a good choice for bush tucker areas, native gardens or for an interesting climber that is easy to grow and maintain.