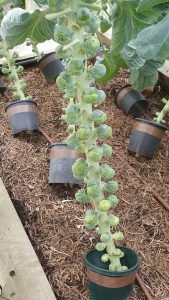 My wife and I have never managed to grow Brussels sprouts successfully – the plants grow ok but the sprouts never really form. So, last year I went to Adams Farms in Coldstream to seek their advice (Adams Farms specialise in growing Brussels sprouts and supply, amongst others, Coles). They told me that they grow it as a summer crop (rather than as a winter crop, as I had been doing) and they gave me 18 of their seedlings.

The result? We planted the seedlings last November and, in early May, we starting harvesting the literally thousands of Brussels sprouts that have grown: 18 plants with an average of 60 sprouts each equals 1,080 sprouts!

Cabbage moths (Pieris rapae) lay their eggs on broccoli, brussels sprouts, cabbage, cauliflower, kale and other brassicas. The caterpillars then eat large volumes of the plant’s leaves. Jodie has written in: “Can you suggest what I can use to repel cabbage moths? They are now everywhere in my garden and holes are appearing on the foliage of my brassicas.“. Kimberley wrote in with a similar question.

Here is my answer. Fine bird netting can stop the moths laying their eggs on your brassicas. You don’t want the netting to rest on the plants, because the moths can then lay their eggs through it, so use some sort of wooden or plastic structure upon which to rest the netting. And make sure that the netting goes all the way down to the ground so that the moths can’t get underneath it.

If, for some reason, you don’t want to use netting, there is another possibility. Cabbage moths are territorial and if they see another cabbage moth in the vicinity, they tend to leave. So, either make, or buy, some decoys – just white butterfly shapes on sticks. Many nurseries sell them.

Some people like eating lettuce as their main leafy green. Others like something more peppery, such as rocket (aka arugula). I’d like to suggest that you try either mustard greens and/or mizuna. Both have a pleasant peppery taste, but not as strong as rocket. Both grow easily and quickly, and you can start harvesting leaves within two months of planting. They also grow well in pots. You can plant it at any time of year. The plants should be spaced around 30cm apart.

Mustard greens come in two main forms, one with thin frilly leaves and the other with wide flat leaves. I eat both but prefer the former, with ‘golden frills’ being my favourite. Mizuna comes in a single form, with leaves of a similar size to those of rocket. I tend to grow mizuna during the summer because I find that it bolts (i.e. goes to seed) more slowly than mustard greens and I grow mustard greens during the rest of the year because I slightly prefer the taste.

Broccoli, cauliflower, cabbage, kale, brussels sprouts, mustard greens, kohlrabi, turnip, collard greens, mizuna, tatsoi, pak choy, bok choi, wong bok – the list goes on – these are all part of the brassica genus1. They are diverse in both their range and in the way that they are eaten – either as roots, leaves, flowers or stems.

Generally brassicas are cold-hardy vegetables and are grown over Autumn, Winter and Spring. But there are variations in the ideal planting times.

For example, brussels sprouts are best started in late Summer. They take four or more months to form sprouts, which are best matured over Melbourne’s long stretch of cold weather. Any less, and you can end up with a leafy plant with no sprouts.

By contrast, traditional Chinese vegetables such as bok choi and pak choy should not be started before late Autumn, as any hint of hot weather or water stress may see them bolt to seed before you have had a chance to enjoy them. The Japanese tatsoi is similar. Plantings can then continue throughout Winter (although growth will be slower). The main advantage of boy choi and pak choy, apart from being deliciously crunchy, is their quick time to harvest – a couple of months.

Plants such as broccoli, cauliflower and cabbage have a wide range of planting times (and, indeed, some sources say that broccoli can be planted any time of the year in Melbourne). However, I recommend planting in April or May. This means that your seedlings can establish themselves before the worst of the cold weather and the population of caterpillars from the white cabbage moth will be on the decline. Your harvest under these conditions will be early Spring.

Kale is an extraordinary vegetable that just powers on. Start planting from April and then continue planting right through Winter. The colder it gets, the crisper kale looks. It can take a few months to get the leaves to an appropriate picking size, but once that is achieved, you can continue picking every 2 weeks or so right through until November. If you are lucky, the plant may resist flowering and ‘going to seed’ in November and keep going right through Summer (although the leaves may get smaller and the caterpillars more numerous).

Kohlrabi is not commonly seen in backyard gardens, but is easy to grow and can be started in early Spring or Autumn. Avoid growing over the heat of Summer, as it can become woody. The time to maturity is fairly short, being 2 to 3 months depending on variety.

Mizuna is increasing in popularity and is one of the components often seen in salad mix, having a mild flavour. Start any time from late Autumn and then keep planting over Winter. Once the hotter weather arrives, mizuna will flower and seed, so make your last plantings late July or early August.

Mustard greens are leafy greens, sometimes with huge leaves (e.g. Red Giant) which have a hot taste if eaten raw, or no heat if cooked. Preferably plant over Winter, as they don’t like the hot weather.

Brassicas are susceptible in two main areas: a) heat (which makes them run to seed) and b) caterpillars from the cabbage butterfly. For both reasons, brassicas are not normally grown in warm weather (the caterpillar population is killed by cooler weather).

There are several organic and non-organic products available which will deter the caterpillars. One of the most interesting methods I have heard of is from a lady who hung white plastic square tags on sticks around the brassicas. Apparently if the cabbage butterfly sees another ‘butterfly’ (square plastic tag) nearby, it won’t stop in its territory to lay eggs. However I have no proof that this method works!

2 Responses to “Brassicas – a diverse group”