Question: why did an Italian, a Bulgarian and a Briton meet in Australia to discuss the French?

Answer: to discuss the new Old Evropa Bakery, which opened in Eltham Village on 22nd June. Yes, that’s right, Old Evropa, who will be known to many of you from their presence at Eltham Farmers’, Hurstbridge Farmers’ and Warrandyte Community markets, have opened a shop. So, you can now buy their yummy bread 6 days a week. I met with Tatiana and Damiano Coluccio, aka Old Evropa, to discuss what they are doing and why.

In the discussion, it quickly became clear that they are on a mission, and that this mission is more than just providing us with yummy bread. Rather, for them, it is about us eating the right sorts of bread; bread that does not make you feel bloated or acid refluxed; bread that does not contain any ‘chemicals’; and bread that has been long-fermented, to make it more easily digested. In other words, bread like it used to be (as long as you are European). So, to quote Damiano, their bread contains only certified organic flour, yeast, filtered (and thus purified) water, salt and (of course) love.

The long fermentation is the key. It is this which conditions the wheat to make it easier to digest. And it is this which, in their opinion, makes the bread suitable in some cases for people with gluten sensitivity.

But the long fermentation is also a problem for the Coluccios. It is this which means that they have had to start baking around midnight. And, because their current small baking space at home is not a controlled environment, they then had to stay up all night to control the sleeping and waking up of the yeast. Thankfully, the new bakery has a controlled environment so Damiano and Tatiana will be able to move from being 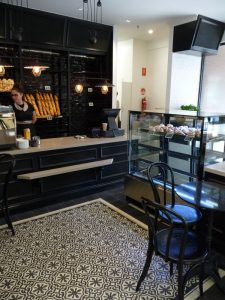 I asked them about the scope of what they will be selling in the shop. They replied: a full range. Loaves as well as their current focaccias and baguettes. Croissant and pastries. Even filled baguettes. Tatiana will be full-time pastry chef, and Damiano full-time baker.

I asked them whether opening a shop had always been part of their plans. Tatiana replied that she had always wanted to open a European eatery where people would be able to savour products that bring back memories from Europe. Although they have a long history in both the food industry and baking for family gatherings, perhaps surprisingly, they have only been baking commercially for the past three and a half years. The new shop will allow them to substantially upscale their current operations 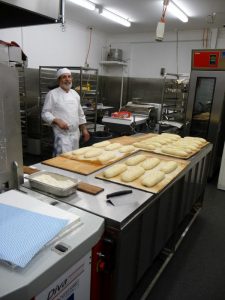 whilst still continuing with their traditional methods. They would like to go down the route of Organic Certification and they are clearly in it for the long haul.

I ended the interview by wishing them best of luck but saying I would be sorry to see them stop being a stallholder at Eltham Farmers’ Market. “Oh, no”, they replied, “we will be carrying on at the market“. So, actually, you will be able to buy their yummy bread 7 days a week.