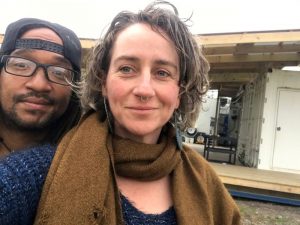 Julia Laidlaw, founder of Sporadical City Mushrooms (SCM), grew up between Melbourne and her grandparents’ farm in Western Victoria. With a background in community development, experience in food co-ops and an (almost complete) MA in Agroecology, she is passionate about local food production. She is excited by urban farms, micro farming on suburban blocks, community gardens, local food enterprises and people growing food for their community. She believes that cities have a much larger role to play in feeding themselves than they currently do and argues that: “small-scale farmers produce up to a third of food consumed by humans globally and are critical to local food security, health and biodiversity.“

A few years ago, while working with urban farmer Paul Miragliotta of Days Walk Farm in Keilor (a Certified Organic market garden in a suburb 22Km north of Melbourne CBD), Julia decided to try her hand at growing mushrooms at her rented home in 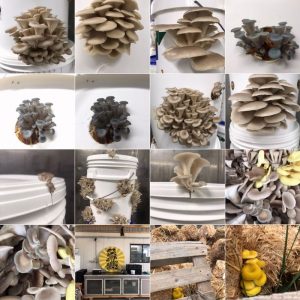 Carlton. To skill herself up, she did a course in growing gourmet mushrooms with Milkwood Permaculture. Then she mixed some grain spawn with pasteurised straw and packed them into clean, perforated buckets, went to Mexico for a holiday for a month and came home to find them all fruiting. With many more mushrooms than her household could eat, she found some local restaurants that were happy to buy such fresh local produce. Julia was soon selling 12kg of mushrooms a week to local restaurants within 1 km of her house and thus an urban mushroom farm was born.

In 2019, Julia was invited to lease a space to build a larger farm at the Melbourne Innovation Centre in Alphington. Starting from bare soil and with the help of friends, she designed the upscaling of Sporadical City Mushrooms to operate from two recycled 40ft shipping containers, with one 20ft container for storage. She also extended the opportunity to another grower, The Mushroomery, to build their business next door to SCM. 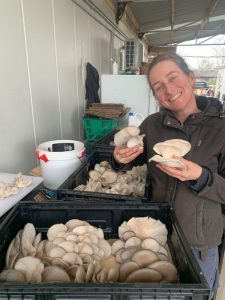 As she prepared jars of grain spawn to inoculate the straw in which her mushrooms would grow, Julia explained that oyster mushrooms (Pleurotus ostreatus) don’t need soil. All they need is water, mycelium and straw (which is an agricultural waste product). They also need a humid environment to fruit in – which is why some home growers grow their mushrooms in their bathroom or laundry.

The process starts with jars of sorghum and millet grains being sterilised in a pressure cooker. After the grain has cooled, mycelium, in the form of a liquid culture, is added and the jars are stored on shelves while the fine hairs of hyphae grow on and around the nutritious grains as they feed off them.

The next step involves mixing pasteurised straw with the grain spawn and packing it into super clean 20-litre food grade buckets. SCM is concerned with minimising waste in their production process so decided to utilise recycled buckets to fruit their mushrooms from instead of plastic bags (which many other gourmet mushroom growers use). Once packed, the mycelium is given time to colonise all the straw and, after 2-3 weeks, the ready-to-fruit buckets are placed in a fitted-out shipping container ‘grow room’ that is 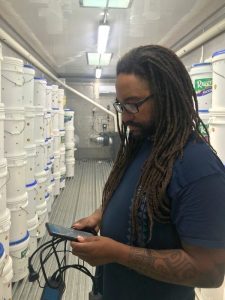 kept humid and cleaned every week.

The growing room holds about 360 mushroom buckets. At the moment, 60 new ones are brought in every week and 60 taken out to be emptied, cleaned, and then re-packed, making the work quite labour intensive. The buckets stay in the grow room for around 5 weeks and generally fruit 3 times over that period.

Despite the huge job of building a farm from scratch, Julia feels grateful for the support that her site neighbours at Melbourne Innovation Centre have shown for her small business and for the support of her partner Walter who has been working with her to build the business over the last 2½ years.

As they have grown, SCM recently brought on Jess to assist with production and product development. 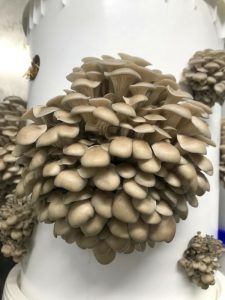 A by-product of the mushroom production process is mycelium-covered straw which is available to purchase as mulch for $10 a bucket. SCM also offers an exchange for people looking to take larger amounts in exchange for the labour of scrubbing and hosing the buckets clean. Julia enjoys staying in touch with other food growers in this way.

“When people come to get mulch, they tell me stories about what they’re growing. During the lockdowns, when primary producers were essential workers, it was great to have contact with the people who came to collect the mulch and wash the buckets. Life was still going on.“

Sporadical City Mushrooms sells between 50-60 kilos of mushrooms a week to 10 different buyers, and at farmers’ markets around Melbourne. In collaboration with Parcs (a restaurant in Little Collins Street), La Pinta (in Reservoir) and SMALT (a local food business in Ascot Vale), they have also developed three mushroom products: an XO sauce, a mushroom confit and cold smoked mushroom broth. The XO sauce (mushrooms with ginger, garlic and red chilli) is a 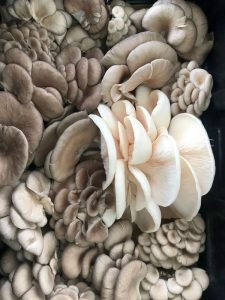 Building on her experience in community development, Julia offers classes to the public and community groups on how to ‘get growing’ at home using the same low tech and low-cost DIY methods that she employed when she started her farm at their rental property in Carlton. See her upcoming classes.

This year, Julia has collaborated with mycologist Sapphire McMullen Fisher from Fungi4land on some ‘The Fungus Amongst Us’ walking tours though the neighbouring Darebin parklands. Fungi4land is a not-for-profit organisation working to build awareness of the importance of fungi in global ecologies and healthy, sustainable food production. The tours, which take place on selected Saturday mornings, help build people’s awareness of their local environments through a ‘fungal lens’. They end with a tour of the SCM farm. See her upcoming tours, if any.

Julia has done a lot of research into mushroom growing and has drawn on the expertise of mycologist Paul Stamets (among others), whose book, Growing Gourmet and Medicinal Mushrooms, she refers to frequently for a step-by-step guide to all aspects of mushroom growing.

Here is Stamets’ TED talk for the mycelium-curious and anyone who wants the tops of their head blown off with statements like “In a cubic inch of soil, there can be more than eight miles of [mycelium] cells.” It will also be of interest also to those who would simply like to increase the number of ‘soil magicians’ on their patch, or who suspect that they might be related to fungi …

Networks of knowledge and hope for the future

Using her hands, Julia is putting into practice her knowledge about small-scale agriculture. She is contributing to a food system in Melbourne that is local, decentralised, and makes use of recycled materials. Working collaboratively, using the knowledge of those who have gone before and sharing the labour of those with a similar mindset, she is inoculating the community with goodwill and growing networks from which thousands can feed.

Visit Bar Romantica in Lygon Street, Brunswick East and order ‘Julia’s Mushrooms, Parmesan, Garlic, Onions Pizza’ from the menu. You can have a side salad of ‘Days Walk Farm Garden Salad’ too.