Many people have experience with the common herbs, such as basil, chives, oregano, parsley, rosemary, sage and thyme. Recently, with a number of culinary TV shows demonstrating different ingredients, interest has been sparked in a wider range of herbs. 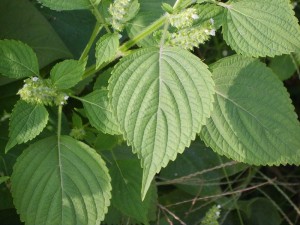 This is a traditional Japanese herb, also known as Japanese Basil or Aoshiso. It comes in red- and green-leafed forms with oval, indented, serrated leaves. The leaves are like a big-leafed basil in appearance but very different in flavour and aroma.

The green-leafed form is often used in Japanese sushi and the red in umebashi pickled plums, amongst other dishes. The leaves can be eaten raw, cooked, pickled or used as a garnish.

It can be grown from seed, but this can be difficult unless fresh seed is used. It can also be grown from cuttings. It is an annual, grown over the summer months and will grow in sun or part shade. It is said to reach a height of 150cm, however the tallest I’ve seen it is about 80cm. 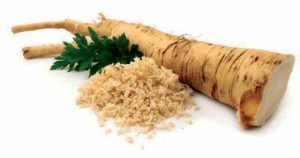 Most people know the flavour and powerful stimulant effect of this herb from horseradish sauce, which is traditionally used on roast beef.

The plant is not easy to find, but once you have it in your garden it will probably be permanently there. The plant grows from the smallest amount of root left in the soil and side shoots can be prolific.

The flavour is concentrated in the root of the plant, which can be thick like a parsnip or depending on soil and situation, long and stringy. Richer, loose, well drained soils produce thicker roots.

It can be grown in part shade and will tolerate sun, although the up-to-50cm long leaves can burn in strong sun. Snails love eating the leaves, but this doesn’t seem to affect the root growth.

It is a perennial, with leaves that die back in winter and return in Spring. The root can be dug at any time, but you might like to leave the plant growing for a year before you harvest, to build up a quantity. Only a small amount of the root needs to be used, whether medicinally or in cooking, due to its powerful effect. Apart from numerous therapeutic uses, it is used as a condiment or flavouring (e.g. horseradish sauce), or simply grated into salads. The root will keep for a few weeks in the fridge.

I’ve heard of horseradish being grown in upright PVC pipes, so the root grows long and straight and is easy to harvest by shaking out the pipe. This may also prevent it from spreading throughout your garden. 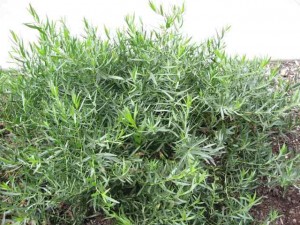 French tarragon is perennial, dying back to the ground in winter then reappearing the following Spring. The stems, with pointed separated leaves, grow 30 to 90 cm long and trail outward and upward in a tangled fashion.

It doesn’t set seed, so propagation is either from root division as it returns from dormancy in Spring (the easiest method) or from cuttings. It can be difficult to propagate numerous plants from a single plant, which may be one reason why it’s not readily available.

It has a special, complex flavour and is traditionally used in French cuisine. It is used in an extensive range of meat and vegetable dishes. It can be dried (although its flavour and fragrance tend to diminish) or it can be preserved in vinegar or oil. 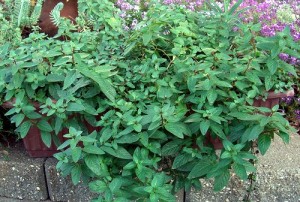 Moroccan tea mint is a hybrid mint, with Spearmint being one of its parent plants. It has the same spreading nature as other mints, although it is perhaps slightly less vigorous and can die back in winter.

It can be combined with green tea and sugar and it can be purchased as a commercially available loose leaf tea. It is a popular tea in Arabic nations.

It can also be used in mint sauce and in cooking combines will with vegetables such as peas and carrots.

It is best propagated by root division in Spring and grows easily. It grows best in shaded positions. Lilac flowers appear mid to late summer and its leaves are soft and crinkly.