Robin Gale-Baker, from Sustainable Macleod, discusses mulch. This is one of a series of articles she has written about growing techniques (see right hand sidebar). She has also written a number of articles about growing various vegetables, herbs and fruit trees.

With the drought has come high prices for organic mulch, that indispensable item for the home gardener. Pea straw and sugar cane mulch have risen steadily over the past few years and are now the most expensive they have ever been. What are we to do?

Mulch is important for several reasons. Most importantly, it stops the soil surface drying out and retains moisture in the soil. It also prevents weeds growing and seed germinating, and adds organic material to the soil, improving its health and aeration. It insulates the soil, keeping the soil temperature consistent. And it prevents compaction caused by heavy rain.

There are many materials that can be used for mulching. Some are suitable for the veggie garden which generally needs a pH of 6-7, some for trees, and some for acid-loving plants requiring a pH of 5.5 or below:

Other readily available mulches – often free – include grass clippings, leaves and coffee grounds and husks. All must be applied very lightly as they can mat and also produce an unpleasant odour.

After this article was published, several people wrote in: Carol Woolcock: “I grow green manure crops using packets of McKenzies legumes (whole green peas, any of the beans and chickpeas) from the supermarket. Very cheap ($1.80 for 375 grams) compared to the small packets of seeds from nurseries ($4.25 for 30 seeds).” Fay Loveland: “I would like to suggest the use of newspaper as a way to keep garden beds moist. Over the last three months, I have been trialling a no dig garden method developed by permaculturist Morag Gamble and I’m very happy with the results. In this method, layers of wet newspaper are added under the final mulch layer. By having the newspaper as the last layer before the mulch, rather than laid on the ground under the compost layer: the compost layer integrates more rapidly with the existing soil; soil flora and fauna quickly get to work without the barrier in between; the compost layer stays a more moist and stable temperature under the paper layer; the newspaper layer prevents weeds from growing in your garden, including the unwanted seeds from your compost; less nutrients from the compost are evaporated and lost; and the roots of plants can penetrate directly into the soil so stay hydrated longer, can access minerals and have increased resilience and stability.”

Kay Wawn: “I owned Urban Farming permaculture business for 11 years, now closed, and sold mulch + other natural fertilisers, etc so can tell you:

A lively discussion about rice hulls as mulch also took place: Gerard Maloney: “I use rice hulls as a mulch. I can buy a 125kg bag for $55 at a local produce store and they last for years as a mulch and do not mat.” 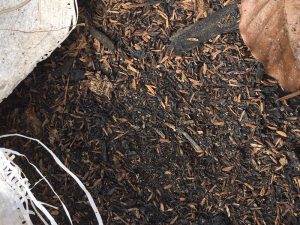 Julie French: “I recently visited a farm in Bali where they use rice hulls in their vegetable gardens. The hulls are first burnt, or scorched (see photo), left for 6 months, then mixed into their composting system. They are blessed with rich volcanic soils and plenty of rain but still need to constantly renew the soils that they grow with.” Heather: “I’ve been using rice hulls for years and found them very good for keeping nests and floors dry … plus the chooks can nibble them for extra fibre.” Jaime Edge: “I would love to be able to buy rice hulls (to use in my chicken coop, we have used this method for years with great success) but I can’t find a supplier with stock.” Rebecca Parsons: “St Andrews Stock Feed currently have large bales of rice hulls in stock. $85 for 125Kg.”
A number of other local stock feed suppliers are willing to order the bales for you. However, the manufacturer Coprice is not currently making them. Their response to our enquiry: “Unfortunately no, we do not have rice hulls at present. The shortage will be for the 2020 cropping year (April through to March 2020) due to the drought and shortage of rice crops. When we start to get rain and water, this will hopefully change in 2020.“

How to plant seeds in punnets