Also, read Robin Gale-Baker’s article on the Sustainable Macleod website. Plus, Robin’s articles on this website about pumpkin harvesting and zucchini pollination.

Armenian cucumbers (aka snake melons) are a type of rockmelon but they both look and taste like a type of cucumber. If you are bored with growing the same old Lebanese cucumbers each year, try Armenian cucumbers this year: they are extremely prolific and, to my palette, a bit tastier than cucumbers. And you don’t need to peel them.

Rockmelons – smell their bottoms or watch them change colour? 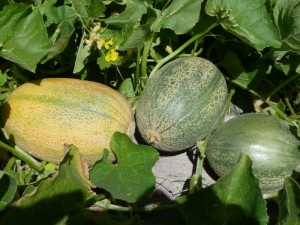 Sometimes growing vegetables seems easy. Last year, we grew cucumbers. We got millions of them (well, say 50). And they grew quickly, each fruit only taking around a week to go from first appearance to full size and ready for harvesting. And (importantly), my wife had a recipe for pickling them, with results that we both thought were yummy.

Sometimes, however, things seem more difficult (and, therefore, actually more interesting!). This year, our chosen cucurbit was rockmelons. Initial developments were promising: we successfully pre-germinated the seeds, then put them into seed trays, then transplanted them to the veggie patch. But the day after transplanting them, we woke to find that all bar one had been eaten by snails. How to protect the last one? Our solution (thanks, Google) was to put copper tape (thanks, Bulleen Art & Garden) around the remaining seedling. Apparently, snails get a slight electric shock if they touch copper, so they won’t cross it.

After a few weeks of prolific growth, the flowers started appearing and we began our daily task of hand-pollination (cucurbits have separate male and female flowers). Around 10 melons appeared within the next few weeks and grew to a reasonable (i.e. eatable) size. But they didn’t look ripe and, indeed, they didn’t pass my wife’s daily smell test (smell them at the stem end to see if they have developed a sweet aroma – she calls it “smelling their bottoms”). A fortnight later, my impatience got the better of me and I picked one but it was completely unripe. Perhaps our variety never becomes sweet, I thought. Just wait some more, said my wife.

So, we waited and waited, with ritualised smelling of bottoms each day. Then suddenly (i.e. overnight) one of them completely changed colour, from green to yellow (see picture), with a noticeably sweet aroma. We picked it and, sure enough, it was as juicy and sweet as we could possibly have hoped for.

The moral is the obvious one: patience is a virtue (or, maybe, the wife is always right!).

Have you ever had the experience of seeing a small zucchini on your zucchini plant one day, then coming back a few days later and finding something the size of a baseball bat? Or having so many zucchinis that your friends and neighbours look slightly frazzled when they see you coming with another armful to share?

Zucchinis belong to the cucurbitaceae family, which consists of a wide variety of plants – the most well known being cucumbers, gourds, pumpkins, rockmelons and watermelons.

The timeframe to plant these vegetables is Spring. Within this, variations exist depending on what you are growing and where you live.

Seeds can generally be planted now for zucchini, pumpkin and cucumbers. However, given that the odd cold day and night is still possible, begin the seeds indoors, in punnets, in a sunny window. Transplant the seedlings out into the garden mid October. If you live in a slightly cooler region (e.g. Kinglake), you might wait a few weeks longer.

Watermelons and rockmelons (cantaloupe) can also be grown in Melbourne, but they like hotter conditions. So, plant seeds and/or transplant seedlings around the end of October. Watermelons can be challenging plants to obtain fruit from, as they take 4-5 months to develop and require hot conditions during this time. Rockmelons are easier, requiring around 3–4 months.

Most of these plants will happily sprawl through a sunny garden. Ensure you plant in a well-prepared garden bed with plenty of compost and manure as the plants are heavy feeders due to their size.

Pumpkin plants take up considerable room, watermelon and rockmelon less so, and they will all need room to trail. Because of their vine-like nature, they can be trained up a trellis; however if you use this method, consider the weight of the pumpkin you are growing – smaller pumpkins may work better.

Zucchinis tend to stay put, only sprawling slightly, but they are still large, strong plants which can smother smaller vegetables unless spacing of about 1 square metre is given per plant.

Watch for powdery mildew on the leaves of your plants – it is very hard to avoid. Try watering plants from underneath to prevent water sitting on the leaves (which encourages its spread) and allow good ventilation between plants. If a small outbreak occurs, you can cut off the damaged leaves as long as this does not take away too much of the plant. Fortunately, mildew problems tend to occur near the end of the season and is generally something that you can live with.

Unusually, cucurbits have separate male and female flowers. This means that a flower cannot fertilise itself. To ensure plants produce fruit, some gardeners hand pollinate their plants instead of relying on bees, which may not be around due to inclement weather etc. Pumpkins and melons are more prone to lack of pollination than zucchinis and cucumbers, but the process is similar in all cases.

Identify the male flower (on a longer stem, with one ‘stamen’ in the middle) from the female flower (produced closer to the plant, with a sticky multi-segmented ‘stigma’ inside). The male stamen is ready for pollination when coated with easily detachable yellow pollen. Pick up the pollen by swirling a small paint brush around inside the flower, transferring it then inside the female flower. Voila! Your female flower will hopefully be pollinated, which will be apparent in a few days if fruit begins to grow. If the fruit withers and falls off the plant, the pollination has been unsuccessful and you will need to start again.

Zucchinis can be harvested whenever the size looks right to you. Ditto cucumbers. Pumpkins are generally ripe when their stem turns woody and brittle and their colour changes. Watermelons are tricky – check the base of the melon (the part in contact with the ground) to see if it is a pale yellow colour and also ensure that the ‘tendril’ on the end of the melon where the flower has been, has dried. With rockmelons, watch for a colour change and a wax-like appearance to the skin [Editor’s note: read my note entitled rockmelons: smell their bottoms or watch them change colour?.].