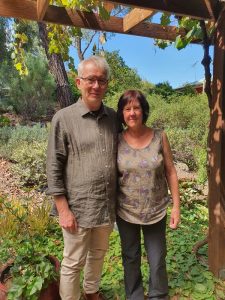 Dianne and I are  standing beneath an enormous elm tree admiring a mixed border of Australian and introduced plants. She is saying that she planted “any (species) that would survive” in this bed and I reflect that, at the dry end of our hottest season, her blend is surviving quite well – the bank is massed with low lying shades of green and dotted with tiny points of colour.

Above us, the elm’s canopy of limey leaves filters soft sunlight and we’re bathed in a golden glow … we’re surrounded by the hum of bees and the songs of birds – this mild autumn morning sings.

I’m visiting Dianne and John at their ‘battle-axe’ block set in the steeply rolling hills between Eltham and Research – we’re close to Main Road but completely cut off from the bustle of major arteries. This was once a much bigger property but over the years it was whittled down so that 28 years ago, when Dianne first moved in, it had been reduced to around an acre.

The original farmhouse still clings to its giddying slope, partway between high hilltop and low, dry, creek bed; I reflect that this site isn’t for the faint-hearted and my thoughts are confirmed by Dianne, who seems to be a very positive woman – she tells me how great uneven blocks are for hip health!

Access to their split-level home is via a narrow driveway that slinks between barely visible roadside properties then rises sharply to a carpark, level with the house’s lower floor. From there a path leads upwards through the stone rimmed garden beds and past impressive trees to the home’s main entrance.

The path leading to the entrance provides a lovely view of the original farmhouse. It was constructed with richly oiled, wide timber planks and has since been augmented with similarly timbered rooms and a wide, west facing balcony. On the lower level, a light-filled mudbrick apartment has been added and it is distinguished by its high clerestory wall.

But my lasting impression of this property will be of its trees. Enormous oaks and pines plus the limey elm greet visitors, who then glimpse eucalypts in the upper eastern paddock and a varied collection of fruiting trees on the terraces at the other (northern) end of the property.

Now we’re standing on the west-facing balcony gazing out into the branches of two 100+ year old oaks. They’re priceless, their trunks rise upwards from the lower side of the house and their enormous boughs spread towards and above us, providing privacy and natural air-conditioning. Dianne is saying that those oaks have suffered from the usual fates of the aged – they’ve required surgical interventions (for white ants) and they’ve also needed serious fertilising (manure) and nutritional supplements (compost and worm castings) for growth … right now they appear to be thriving. 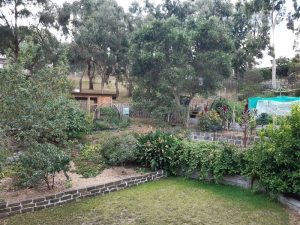 Every garden has its assets and liabilities and this garden is no exception. Water is its lifeblood but containing the flow of water from the top paddock through its higher reaches, around the plateau of the house and then downward to the ‘dry’ creek bed far below must have been something of a challenge when the house was first built.

It seems that this challenge was handled well by the original owners. They devised a system of drainage that allowed rainfall to channel down via open and enclosed drains on either side of the house and then to flow freely to the creek bed. Those first drains were well-tested during the Christmas floods in 2011 and, although the creek became a torrent, the house remained dry! 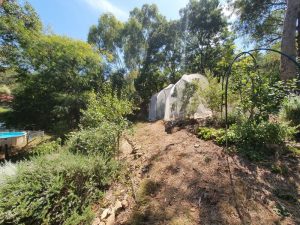 That original drainage remains effective today, decorative too as it mimics natural water courses. En route, some water is diverted into a pretty, mossy pond near the elm tree, a natural water feature which greets visitors on their arrival, before continuing its downward flow.

During the last 28 years, this system has been modified and enhanced. Trenches have been dug into the land in the high paddock above the house to direct water into a small dam (currently on maintenance notice due to a build-up of our local clays). A large tank was also installed at the top of the block to enable gravity fed irrigation for the land at the back and northern ends of the block and to ensure that the edible garden thrives. I’m impressed by a fantastic stand of canna lilies which have been planted at the base of the lower terrace at a point where an original drain exits onto a grassy level space. Their job is to absorb excess water runoff and they make very effective water police. 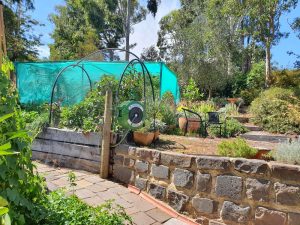 Dianne and John have created and extended terraces in the steep northern slope too, to maximise the area that is cultivatable, and they’ve augmented their soil with the addition of “trailer-loads” of horse manure, chicken manure, compost and, particularly, worm castings.

The results are impressive – the beds there are a blend of edible plants (tomatoes finishing their season, leafy greens, cucurbits, herbs and cottage plants). A particular favourite of mine, amaranth plants, stand high and dominate the view with their crimson purple leaves and heavy seed tassels.

Dianne says that she enjoys allowing her plants to self-seed and spread, so there are few organised plantings, just mixed beds of happy, healthy plants. 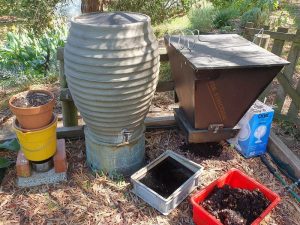 Before my visit, I was told that Dianne and John specialise in worm farming so I’ve been looking forward to seeing their setup.

We’re now standing on the upper terrace and before us is a waist high worm farm. The box is an unusual irregular diamond shape with an undercarriage drip tray for the worm juice; it looks something like a prop from a Dr Who episode! I’m told that it’s one of John’s projects and that they are pleased with the results. Its contents are blended paper (self-shredded, they have plenty), food scraps, worm castings and worms. Dianne says that these worms service their garden very well. 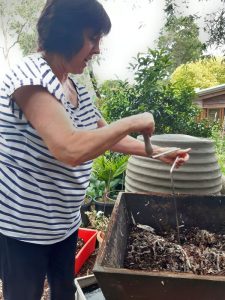 But that’s not their only worm farm – there are several others, like restaurants offering different menus and accommodation, eg manure rich additions, vegetarian delights and meat-based mixtures. The boxes were built to address slightly different needs, amongst them to manage the movement of the worms, to facilitate easy access to the juices and to experiment with diets. We peer into each box and, although the soil qualities differ depending on the contents the results all appear to be warm, sweet and fertile.

Maintenance includes turning the contents and Dianne demonstrates her magic compost screw which gently aerates the beds without disturbing the worms. She’s very pleased with this tool.

It’s clear that the castings and juice (when diluted), along with soil produced in a nearby composter, will contribute to the growth of very healthy plants from the smallest cut daisy to the enormous oaks.

It seems that John can turn his hand to many projects. Dianne says that, through joint discussions, ideas become 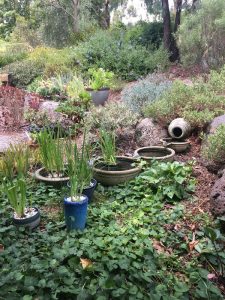 plans for new projects and challenges for John. He then applies himself, utilising his knowledge and learns new skills to complete his tasks and to modify and improve existing designs.

A particular project which catches my eye and admiration is a water feature in the garden bed near the front door. A series of ceramic pots have been dug into a gentle slope. They receive pumped water via unseen pipes and support the growth of Japanese water irises which are, Dianne says, spectacular when in flower. The water flows down the slope from pot to pot, collecting below the lowest then returning to the highest level with the aid of solar power, from there its journey commences once again. The water’s flow produces a pleasant musical tinkle. It’s John’s artistic eye and innovative use of natural resources that has created this elegant feature.

The 2020 COVID lockdown was a challenge for all of us, but during those months Dianne developed an exciting plan to combat the quarantine – she planted “literally hundreds” of daffodil bulbs beneath her many and varied fruiting trees, then watched and waited for them to first appear and finally to clothe her terraced garden with a dazzling display of bobbing golden heads. They were her personal statement of confidence in a bright future!

This is a balanced garden

To summarise, their garden is a complete system – worm farms and composting units, a state-of-the-art chicken coop (John’s design) and bees in the upper paddock, full beds of cottage plantings and a range of fruit bearing trees, all serviced by natural water collection and all flourishing.

There’s an emphasis on a complete environment – on utilising what’s available, maximising its productivity and enjoying its interactions. It’s a harmonious place where many living creatures co-exist.