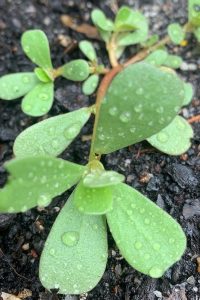 Many of you will know common purslane (Portulaca oleracea). See top picture right.

Whilst it is readily found, it is considered by some people to be a weed due to its ability to self-seed and grow in poor soils.

But did you know that it’s really, really good for you? It has more omega-3 fatty acid than any other land plant and is extremely high in iron.

They use it a lot in the Mediterranean areas and it goes great with fresh fish. 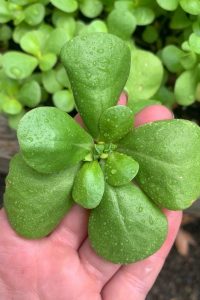 The cultivated variety pictured right is called golden purslane (Portulaca oleracea var. sativa). It doesn’t spread or have the weedy attributes of common purslane. But it will re-seed in its spot and come back year after year for your enjoyment.

It has larger, fleshier leaves then common purslane and I eat these raw as I’m wondering around the garden but they can be put into salads for extra crunch and texture.

Seeds are readily available online and it’s a really great annual which has high nutritional value and is easy to grow, plus it has the added benefit of it re-seeding itself in your garden (but not to the point it would be considered a weed) every year.