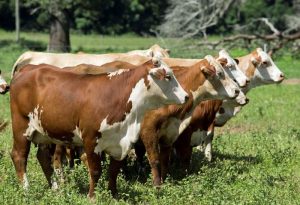 Eating healthy starts with knowing your food. But people often forget that included in this practice is whether or not your FOOD eats healthy.

By now most people are aware of the ‘grain-fed’ vs. ‘grass-fed’ debate, even if they don’t know much about either. So let’s explore what they mean.

Let’s start at the most logical place: birth. I won’t go into the messy details of bovine conception. For now I’ll let your own minds draw that picture. But regardless, the result is life. We get a calf.

Now both grain and grass fed camps let that little calf run around and each grass or bushes or whatever else it comes across. For the first 6-12 months of the cow’s life, the feeding systems are similar. But once that period is over, we get some pretty sad cows.

Grain fed cattle are moved into a feedlot, which is kind of like going to a cramped all-you-can-eat buffet that has no bathrooms. The food is mostly corn or soy, and the purpose of this practice is to produce the fattest cows possible as fast as possible with as little cost as possible. It’s the beef production streamline. Great for business.

But the feedlots cram so many cows in that they require large doses of antibiotics in order to prevent the spread of illness (and further boost growth). As a result of all this, the cows can reach their optimum weight a whole year earlier than grass fed cattle, further cutting down the production costs.

But at what cost to the meat?

Grass fed cattle start out the same way as grain fed cattle, only that is how they live their whole lives. They don’t fatten as fast, or indeed as much. They also require fewer antibiotics as their lifestyle is more hygienic. While the meat tends to underdevelop fat marbling, which is a sought after trait as fat adds flavour, grass fed beef can contain up to five times as much Omega-3 fatty acids. In fact, it tends to be slightly more nutritious all round.

Is it worth the extra cost?

Grass fed is also not synonymous with free range, as it only refers to the feed. There are still some grey areas about what is and what isn’t ‘grass fed’. There’s always more digging to do!

At the end of the day, the question you have to ask yourself is this: is it worth it?

Would you rather meat from an ethically raised cow, or a cheaper beef raised in conditions that put some people off meat entirely?

Either way, red meat has just about every nutrient we need to survive. If your ethics allow it, red meat is a great inclusion in your diet.

The choice is yours! Just make sure you know what you’re choosing.