Ann Stanley, who lives in Warrandyte, visits her local food swap for the first time. 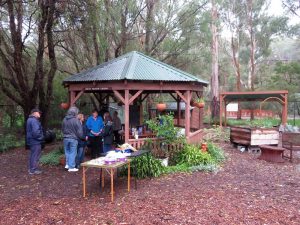 When I chatted to Liz at the monthly Warrandyte Food Swap under the gazebo in the Community Garden, we didn’t talk that much about plants. Instead the conversation was about connecting with people, sharing stories, and troubleshooting. Liz had brought a delicious tangy lemon cake, made with the last of the lemons she picked up at a previous swap, to share with coffee, and she told me how people often bring the fruits of seeds shared by others in previous seasons.

I can’t believe I had been too shy to come here up until now. I had thought I wouldn’t have enough to share, that I’d be shunned and humiliated for my feeble garden efforts! But I should not have feared. I’m glad I was brave enough to venture down the road with my bunch of parsley, a few leaves of lemongrass, some curry leaf, three red chillies, and two packets of seeds. It warmed my heart to share them, all still damp from the 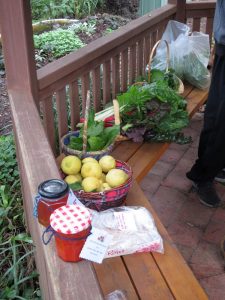 drizzle and the dew, with such welcoming people. It was delightful too, bringing home lettuce, spring onion, lemon thyme, lemons, limes, warrigal greens (straight into the pasta sauce) and a jar of Carol’s delicious (we tried it straight away) red capsicum and tomato relish.

Chris from Wonga Park brought something called olive herb (I think), which smells precisely and excitingly like olives, and I can’t wait to propagate it. Along with Chelsea, his eleven year old daughter, Chris is an avid gardener. They have fruit trees, four big veggie beds and four Isa Brown chooks. It has taken just a year to make productive soils out of compost and manure and last year they made 67 litres of passata. It is a love for food, especially the unusual and difficult to obtain, that has sparked Chris’ love of gardening, as well as the power of the garden to slow him down after a busy work day.

Chelsea told me how the whole family loves chilli. They grow several varieties and make kasundi, an Indian tomato relish. Chris explained how he uses the whole tomato. Who knew you could dry the 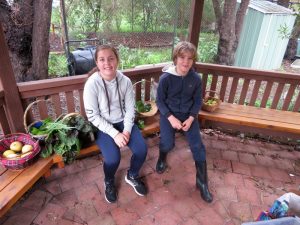 leftover skins, crumble them into a powder and have a tasty seasoning to sprinkle on your pizza? Chelsea loves the garden so much that she has a grand design for the future – a large piece of land with a house for Mum and Dad on one half and a house for herself and perhaps her family on the other. On Chelsea’s side there will be vegetables, animals and a pool. Intergenerational living – what a great idea! For now, she is putting her efforts into a succulent garden.

If this wasn’t enough inspiration for one morning, a conversation with Jodie revealed that her sixteen-year-old son Max is running a guinea pig motel from their home in Park Orchards. Jodie attributes the health of her lemon tree to the fact that it is growing in soil nourished by the bodies of a couple of loved but now deceased piggies (don’t worry – they hadn’t been motel guests). Jodie says that not much else is growing in her garden at the moment except her 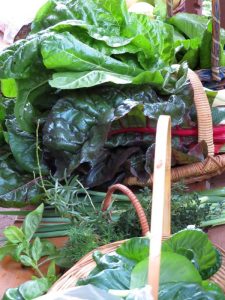 extensive herb collection but previously she had such a surplus of tomatoes and zucchinis that she advertised a swap on the Warrandyte Secondhand Page. That’s how she found out about the Food Swap (and also got some pumpkin and apples in exchange for her surplus). It’s been a year since then and Jodie reflects on how much she appreciates coming.

“I sent a card to Carol to thank her for all the work she does.”

Here’s an interesting thing: Jodie has grown her tomatoes in the same place for six years and last year had an 80Kg yield. That’s the kind of thing that’s worth hearing about but you won’t hear about it in ‘mainstream’ gardening media, where growing tomatoes in the same place year after year is a universally acknowledged sin. By the way, Jodie’s cherry tomatoes this year came from Carol’s seeds from a previous season. 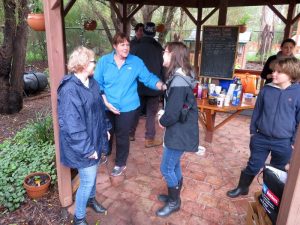 Carol is central to the running of the swap and described to me how it was seeded (excuse the pun) from Eltham Food Swap and, I think, a desire on behalf of Tess and Guy to connect with interested people in Warrandyte. Local Food Connect supplies signage and takes care of the liability insurance.

“Don’t waste anything!” says Carol, before explaining how she freezes apple peels and cores to make apple jelly later.

Glenn describes himself as “a kind of background person“, but he too has been instrumental in setting up two food swaps. In addition, he supports the community by attending several each week. He believes that people have always gardened and increasingly will have to if they want to eat clean organic food. Interestingly, Glenn thinks that ‘food swap’ is a 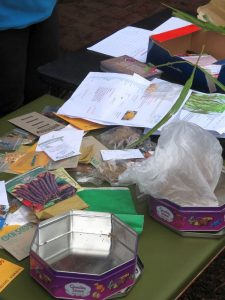 misnomer because they are really ‘information hubs’. I love this because, just as much of the pleasure of gardening is in its often solitary nature, much of the pain is too. It seems that these food swapping information hubs must also be support groups for the demoralised, such as I was when a convergence of beasts feasted on my brassicas last week.

So from now on food swaps are for me, no matter how much or how little I have to contribute. It’s just nice to hang out there, among the like-minded. Even a gentleman whose name is Carol’s Better Half seemed to be having a pleasant time despite his reason for coming: “I’m told to”, he smiled.

2 Responses to “A visit to Warrandyte Food Swap”

How do they work

Where and when they are

A visit to Warrandyte Food Swap

Food swaps over the coming month